An NBL title, bronze medal, an NBA dream fulfilled — none of those are the best thing that happened to Jock Landale in the last year. He’s marrying his high school not-quite sweetheart.

Those who know Jock Landale will tell you he has an intense self-belief and an unwavering determination to achieve.

Those who don’t know him will tell you that too. It’s clear as day every time he steps on a court that he’s special.

The Geelong Grammar kid who didn’t find a love for the peach basket until he was 15 is now in the NBA.

That’s not news to anyone, but Landale, until recently, had never really reflected on the patience and motivation it took to “cut through all the bulls**t” and stick to his mission.

Landale was in Tokyo when he put pen to paper on a contract with the San Antonio Spurs that sealed his NBA dream. Three days later he was an Olympic bronze medallist with the Boomers — Australian basketball’s first major men’s medal. You re-evaluate things very quickly when you achieve two of your major basketball goals in the space of three days.

“I look back at what I’ve done in the past three-four years and it’s like there must have been something going on subconsciously driving me,” Landale said.

“I just always had a belief that I was really destined to make something of myself.

“I never set out with those goals, but they formulated themselves as time went on.”

Four years ago, Landale said no to a trio of NBA teams who wanted to bring him over on a non-guaranteed deal.

He probably wasn’t ready, but definitely wanted the security of both playing time and a guaranteed contract.

So he signed with Serbian club Partizan Belgrade, cut his professional teeth there and then with Zalgiris in Lithuania, before last year dominating the NBL. Bronzed Aussies Jock Landale and Patty Mills catch up after playing against each other in the NBA.

He led Melbourne United to the championship before a starring role in that piece of Olympic history.

After all that, Landale realised he had to dream bigger.

“When I got to the Spurs there was a moment there I felt lost,” he said.

“What am I trying to achieve now? What’s going to motivate me to get out of bed every day and put in the work that I had for such a long period of time?

“I had to set my bar now at the highest possible level — an NBA championship and a gold medal — which is crazy to even say.

“I never took my foot off the gas — from day one I was in there working hard.”

DEALING WITH THE BUMPS OF THE NBA

Jock’s grown before our very eyes.

It’s expected in the NBA.

Some things have happened to him in his first season that don’t pass the pub test.

Like the night in March he played a career-high 35 minutes and poured in 26 points on a ludicrous 12-15 shooting against Indiana — and then played a grand total of seven minutes, combined, in the next two games — without explanation.

The old Jock would have been “furious”. “There is obviously still some frustration but that’s part of the league, you’re expected to be a man about it and I got good at that in the end,” he said.

“It’s a business and you’ve got to understand that and just be ready for your opportunity.

“I stopped worrying so much about ‘why aren’t they playing me, what have I done wrong’ and it just became easy.

“I felt like I really matured in that sense this year.”

There was plenty of ‘Free Jock’ noise in the Twittersphere from Aussie fans wanting more minutes for their man.

“It’s hard to miss when it comes from Bogues (mentor Andrew Bogut), who is someone I like to talk to most days,” he said.

“I appreciated the fan support. I wish I could have been out there a bit more, but that stuff, I can’t really control.”

“That’s what I was most proud of during the season — down the stretch, I just honed in on controlling what I could control.” Landale feels grateful to United for telling him, in the nicest possible way, to “get the f*** out of here and go and play in the NBA”.

“I felt like there was never the pressure of ‘hey mate, we want you back’ or something like that,” he said.

“To have those people really wanting the best for me in my career was huge.”

It’s not so much a debt of gratitude — United gave him the chance to lead the team and he took it to a title — but a loyalty to the club.

“Those guys put a lot of faith in me and a lot of trust in me to bring home a championship and I just think that without that year at United, I wouldn’t be the player I am today,” he said. Landale credits United for helping him become the player he is today. Picture: Getty Images

He was in the locker room after United smacked Cairns last Monday and is pumped for the team’s tilt at back-to-back titles, which begins at John Cain Arena in Melbourne on Thursday.

“I’m going to all those finals games and I’m going to be there supporting them on the sidelines. If I’ve got to talk a bit of s**t to the opposition, It’ll be a good time.”

Landale says he has already floated the idea of a return — one day — with club chief executive Nick Truelson.

“I’ve got a goal in mind. I want to play in the NBA until a certain age, but, after that age, yeah, I think there’s definitely the potential for me to come back,” he said.

“I’ve spoken to Nick already and he’s keen on that as well.

“It’ll be a matter of timing and situation, so hopefully not too soon, but I’m definitely keen.” Jock and India Maddern went to high school together — but they never spoke.

“I never said a word to her because I refused to talk to women back then — just didn’t know how to,” he laughed.

“Two of our best mates, they set us up pre-Covid.

“From there, we were rolling, and, for me, I knew that I was going to be locked down, probably within two weeks.” 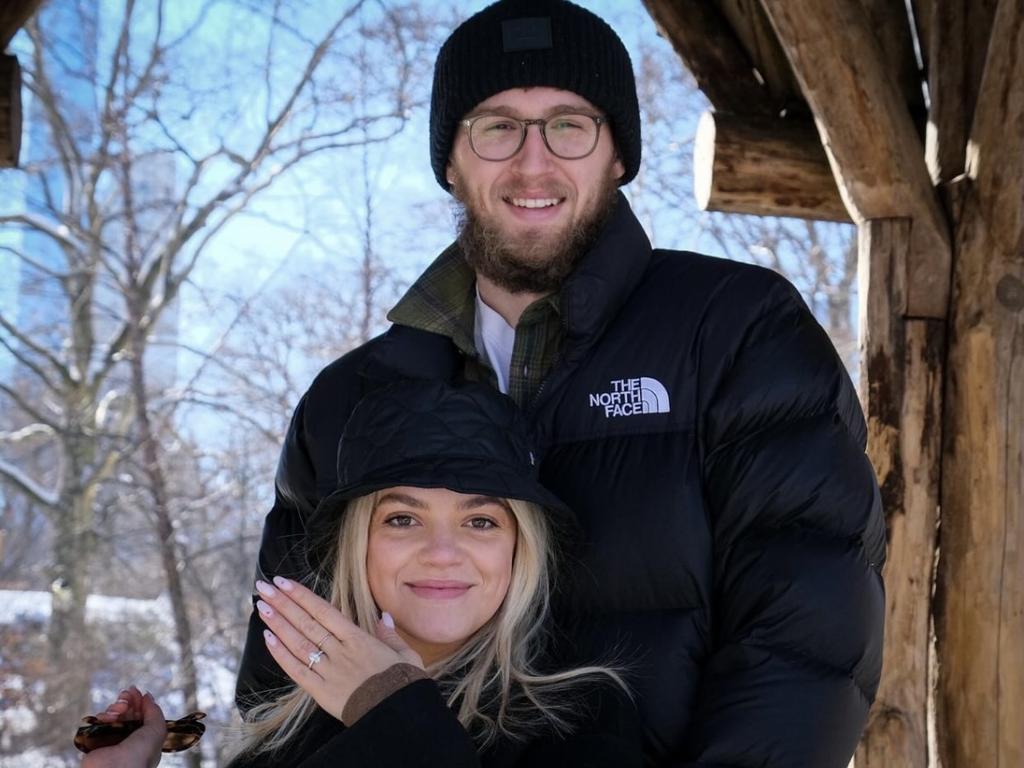 It didn’t take long for Jock to pop the question to India Maddern.

India moved over to the US to live with Landale earlier in the year — and he popped the question in January.

“She’s an unbelievable woman, makes me a better man.

“I was sure of it pretty much from the get go.

“She’s my best mate, I’m extremely lucky to have found her and it’s probably a good thing that we didn’t speak back in high school.”

Landale arrived back in Melbourne this week and he’s enjoying — or been forced to enjoy — a well-earned break.

“I’d been trying to get stuck back into things probably a little bit too quick,” he said.

“My friends and family told me ‘No, you need to take two or three weeks off, you really need to’ after what I’ve been doing for the past three years.

“But habit was just like ‘I’ll be right, jump straight back in’ and I’m just knackered, so I’m committing to some time off.”

“I’m driven to make the most of it and dominate my off-season workouts and make sure that I come back twice as good of a player,” he said.

“I want my body to be in the best nick it’s ever been in and those things are motivating me to make sure that I line myself up for a hell of a season.”

Improvement for the 26-year-old could translate to more minutes, bigger performances and the perks of a fat pay rise — either on an extension with the Spurs or in free agency.

“For me it’s now, ‘well, imagine if a team gives me a proper role and I can produce at that level for 82 games’,” he said.

“I think that’s a hell of a thought to have and I have confidence I can do that.”

Of course he does — it’s his destiny.