The NRL faces a poaching threat ahead of the 2023 Rugby World Cup, but one of the biggest targets has already decided his future. Plus all the Magic Round highlights, lowlights.

Teenage superstar Joseph Suaalii has shut the door on the 2023 rugby union World Cup after taking up his option with the Sydney Roosters. The news is a huge fillip for the NRL so soon after Kalyn Ponga’s decision to commit to Newcastle, thereby shutting the door on an immediate switch of codes. It keeps Suaalii at the Roosters until the end of next season. Sydney Roosters' Joseph Suaalii has taken up an option on his deal. NRL Imagery

It was messy and mistake-ridden but the Gold Coast Titans’ golden-point victory over St George-Illawarra was an edge-of-your-seat 89-minute thriller.

The NRL’s appointment of Ashley Klein to referee and almost ruin the Panthers-Storm game on Saturday night. Rugby league is a game that needs to flow without the constant nitpicking penalties. No wonder just 25,000 viewers watched Storm on Channel 9’s primary channel in Melbourne on Saturday night, the lowest show on free-to-air.

The owner of the New Zealand Warriors, Mark Robinson, had no time for a chat on Sunday morning when we called and asked about his coach Nathan Brown’s future. “Mate I’m in the middle of checking out from my hotel … I’ll have to ring you back bro.” CLUNK. He didn’t pick up when we rang back. Eventually we got a text message: “Hi Phil mate I have nothing to say right now.” It wasn’t pretty, but it was a thrilling finish in the Titans Golden Point win over the Dragons. Picture: Getty Images.

Which Broncos star was spotted at Treasury Casino in Brisbane until 6am after Friday night’s victory over the Manly Sea Eagles.

Gus Gould’s quote from two weeks ago: “Trent Barrett will be coach of the Bulldogs long after I’m gone. He’s going to be a long-term coach for the club” will be proven to be an absolute load of rubbish. And Gus will make the decision to cut Barrett, not the board.

The great Steve Beaver Menzies at a Liverpool netball carnival demolishing a sausage roll at 8am on Sunday morning.

Security was heightened to such an extent at Suncorp Stadium after Friday’s brawl that even NRL CEO Andrew Abdo was turned away at the players’ tunnel on Sunday by an official who obviously had no idea who he was.

The eighth Immortal Andrew Johns and NRL Head of Football Graham Annesley in an animated discussion outside the Channel 9 commentary box at halftime of the Storm v Penrith match. Despite Phil Gould saying Trent Barrett will be at the Bulldogs long term, Gus will be the man to sack him, writes Phil Rothfield. Picture: NRL Imagery.

Assistant coach Willie Peters looking extra elated in the Newcastle coaching box whenever the Knights scored against the Bulldogs at Suncorp on Friday night. Peters had a major falling out with Canterbury coach Trent Barrett when they were together at the Sea Eagles.

Catch you tonight on NRL 360 on Fox League with Braith Anasta, Paul Kent, James Hooper and Cooper Cronk to discuss all the biggest stories and issues from Magic Round.

The NRL is facing a genuine threat from rugby union to stop their best young players from switching codes before the World Cup in Australia in 2027.

Much will depend on the next collective bargaining agreement and how far the NRL is prepared to lift the salary cap and increase player payments.

While the 16 clubs have been given record high grants in the last two years, the players have been on reduced salaries with their Covid pay-cuts.

The club chief executives again want more for themselves before the players get increases.

We briefly bumped into Players Union boss Clint Newton at Magic Round and got the impression that early talks with the NRL around the CBA had not been particularly encouraging.

This is a story that will blow up any time. You can guarantee it.

They say they will aim this time at the NRL’s junior elite players.

Plus the likes of Roosters teenager Joseph Suaalii who has committed to only the end of next season in rugby league. 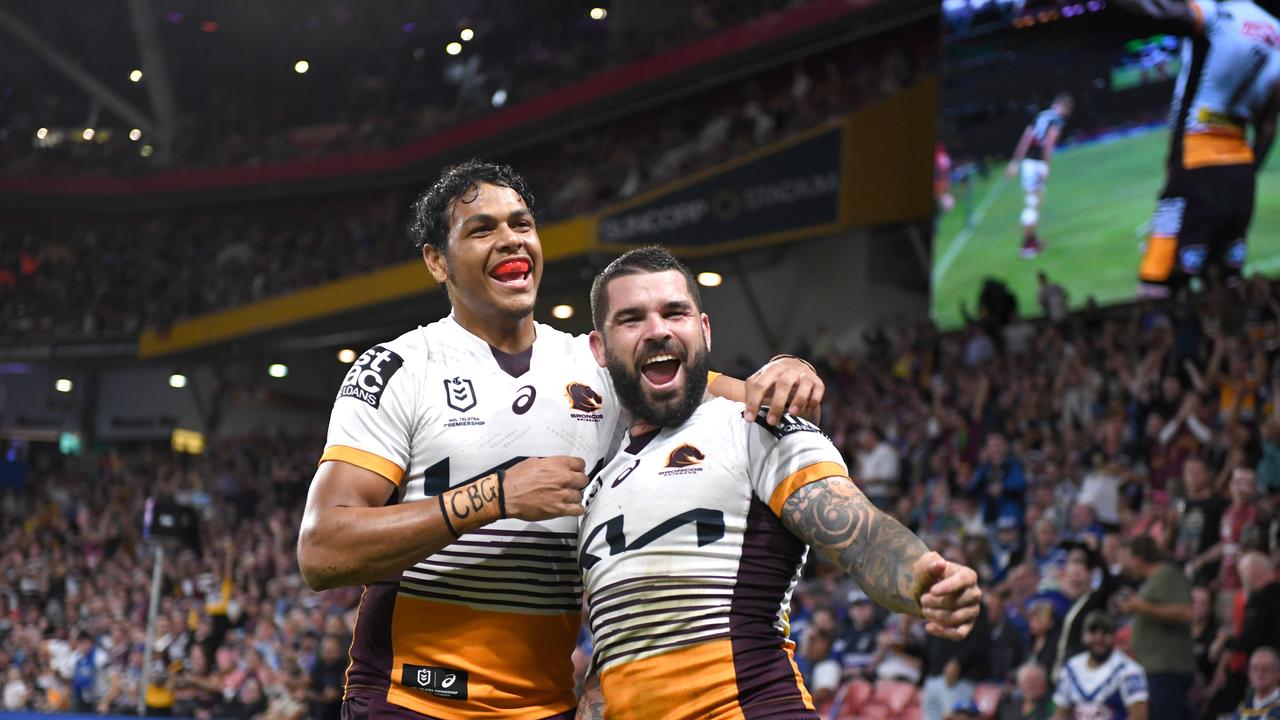 With the Dolphins joining the competition in 2023, one team will be on bye during the NRL’s fourth Magic Round. Picture: NRL Photos.

MISSING OUT ON MAGIC

One club will be forced to miss out on Magic Round next year in the 17-team competition.

Wherever you go in Brisbane, the punters have been asking which team will be left at home.

So we spoke to chief executive Andrew Abdo about the situation.

“The decision will be made around what teams are due for a bye,” he said, “Each team will get two byes next year under the draw format.

Saint, Sinner, Shoosh: Burton could walk out on DogsWhat’s The Buzz: The old boy who got Reynolds to Broncos

“If a team has a bye in the first nine rounds they are not going to get another one in Magic Round.

“They have to be spread out. Whoever misses out next year will play the following year.”