He wasn’t there for the Broncos’ Round 1 win over Souths due to Covid, but there was no stopping Adam Reynolds against his old team this time.

Broncos coach Kevin Walters declared Adam Reynolds was worth every cent after Brisbane’s $2.4 million recruit rubbed salt into the wounds of his former South Sydney club at Homebush.

After missing the season opener against Souths due to Covid, a fit-and-firing Reynolds deployed every trick in his armoury as the talismanic halfback powered the Broncos to their third consecutive victory.

Souths lost Reynolds to the Broncos after a messy contract wrangle and the 31-year-old rammed home his importance in the nerve centre, scoring a try and having a hand in two others in the 32-12 drubbing. 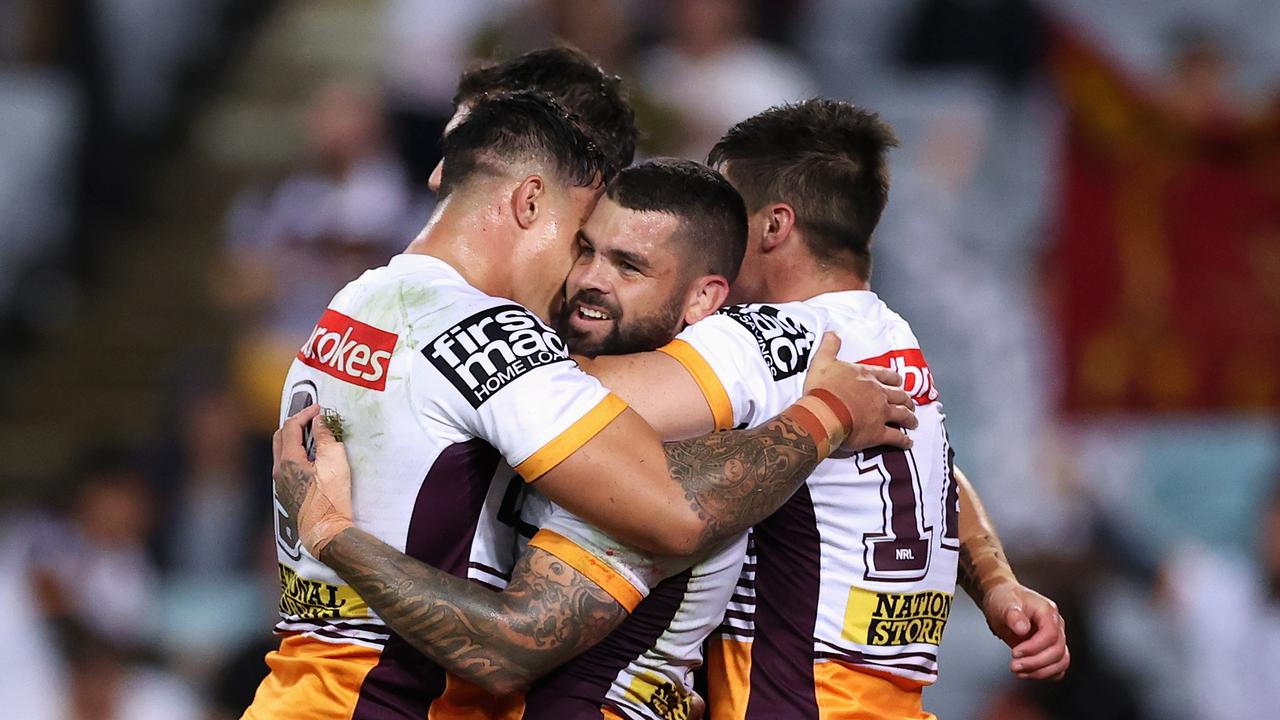 Adam Reynolds produced a masterclass against his old side, as the Broncos secure their third straight win. Picture: Getty Images.

But it wasn’t just Reynolds’ attacking game, it was his masterful kicking which tormented Souths, prompting Walters to laud the influence of The Little Master.

“I am happy for Adam, he missed round one, but he was here this time and we got the win for him,” he said.

“It didn’t surprise me the way he played. I haven’t had a lot to do with ‘Reyno’ but that’s the sort of player he is.

“He makes the other players around him look better and we are grateful to have him.

“From the moment I walked into his house (to sign him last year), I just felt an instant connection and I could see him being a valuable member of our group. He has fitted in really well, we’re really happy we have him for the next three years.

“He has been outstanding for us, he hasn’t had a bad game, that’s what he brings. He has been consistent for 10 years in the NRL and that’s one of the reasons we signed him.”

Reynolds admitted his relief at getting the Souths gorilla off his back. To close the door on his Redfern chapter, he walked over to South Sydney’s fans at full-time to sign autographs and say farewell. 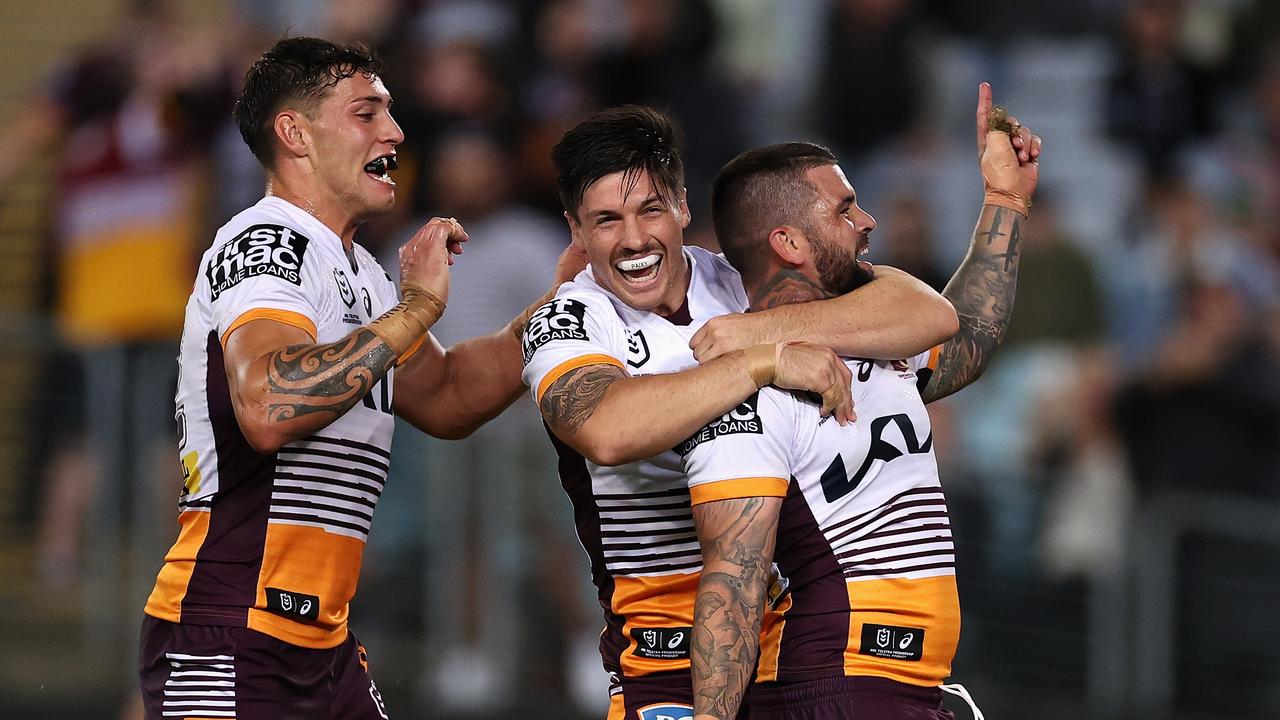 Souths’ decision to let Adam Reynolds go may go down as their worst ever recruitment decision. Picture: Getty Images.

“I didn’t get to say goodbye to the Souths fans last year,” he said.

“It was only fair to go over and say thanks to them, there were a few boos as well. I expected that in the opposition team, it was all fun and games, but a lot of fans stayed back after the game and I am grateful for what Souths have done for me.

“That chapter is closed and a new one starts here at the Broncos.

“The fact we are getting better is more important. I am more excited with what we have been building. We hung in there, our defence has improved every week and it was enjoyable footy.

“I am glad the week is over. I was sick of seeing my name in the papers and the headlines.”

The Broncos will finish the weekend entrenched in the top eight after bolting to a 12-6 half-time lead then running riot after the break, with two-try sensation Selwyn Cobbo icing the contest when he streaked 90 metres six minutes from time. Kevin Walters’ troops engineered the hatchet job without injured star forwards Payne Haas and Kurt Capewell, underscoring the promising Red Hill revival that suggests Brisbane can play finals football this season.

Souths’ decision not to keep Reynolds should go down as one of the dumbest recruitment-and-retention decisions in the proud club’s history.

A local junior, Reynolds is as South Sydney as Clive Churchill. He should never have left the club. He is still the Rabbitohs’ greatest pointscorer and the direction he gave the Broncos represented everything that was missing in South Sydney’s offence.

Reynolds was not Souths’ flashiest player but he was their most important. In their corresponding clash last year, Reynolds’ Bunnies tore Brisbane apart in a 35-6 Homebush hammering. This time, without Reynolds, Souths looked clunky as rookie halfback Lachlan Ilias struggled to execute with the same precision as his predecessor.

“We didn’t want to dive on loose balls or commit ourselves to catches and started doing things individually rather than sticking to what works for us.

“Our effort areas were pretty poor.” 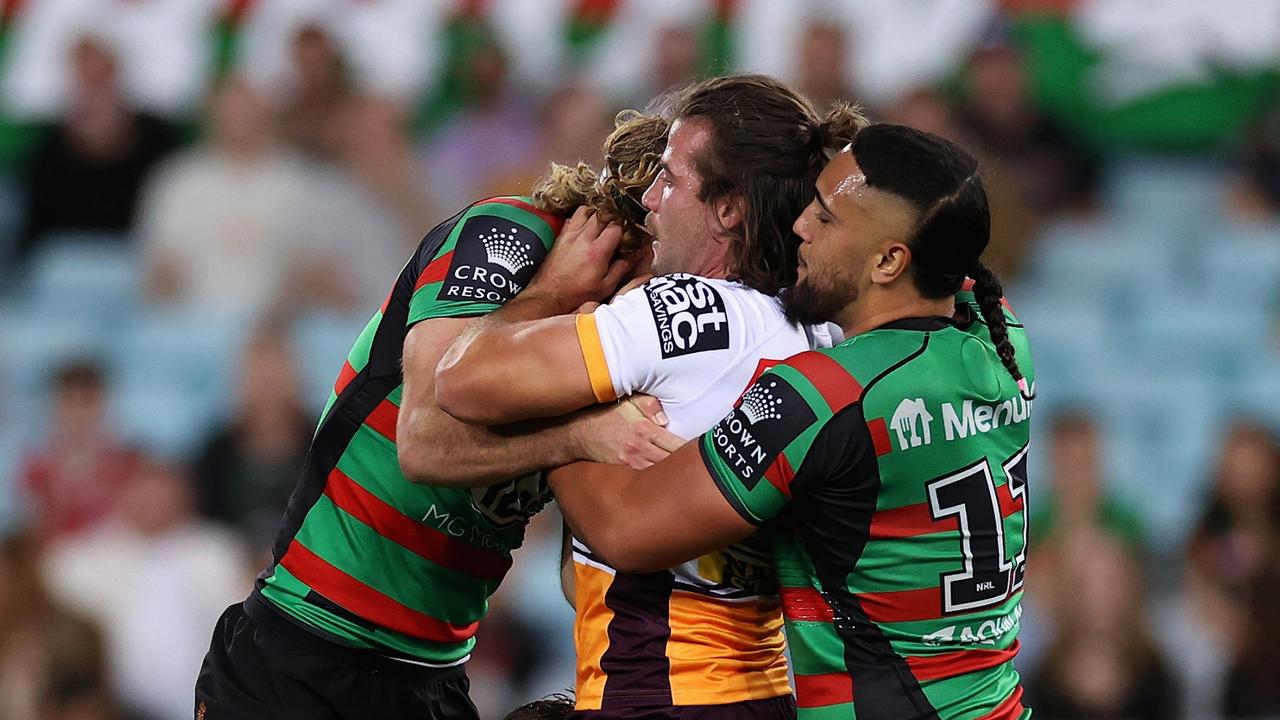 Patrick Carrigan stood up in the absence of Payne Haas. Picture: Getty Images.

PAT ON THE BACK

Broncos ironman Pat Carrigan has a work ethic tailor-made for State of Origin. He has to be in the conversation when the Queensland selectors meet in a fortnight to pick the Maroons side for Origin I.

With Brisbane missing key men Haas and Capewell, Carrigan was magnificent in his return from injury, charging for 145 metres, chalking up 35 tackles and producing a superb offload for Reynolds’ 29th-minute try which had Souths reeling at 12-0. Selwyn Cobbo has continued his stellar rookie season, with an incredible length of the field try. Picture: Getty Images.

Brisbane’s desperation in defence, particularly on their tryline, was outstanding.

The Broncos’ most recent grand-final campaign in 2015 was built on a ruthless hunger to defend the white stripe. Kevin Walters won’t dare mention grand finals just yet, but if the Broncos maintain the rage in defence, they will play finals football this season.

Cobbo continued his rise with a barnstorming display against the Bunnies. Still just 19, Brisbane’s version of Latrell Mitchell oozed class, amassing 183 metres and nine tackle busts before racing away for the late try that left Reynolds celebrating the sweet taste of a Redfern roasting.