An emotional Alex Johnston had a special message for Souths fans after rewriting the Rabbitohs’ history books in Indigenous Round, overtaking Nathan Merritt as the club’s leading tryscorer as they dominated the Tigers.

On the night he broke the South Sydney Rabbitohs’ all-time try-scoring record, an emotional Alex Johnston paid tribute to the fans who fought to keep him at Redfern when power-brokers were intent on showing him the door.

Salary cap pressure looked set to force Johnston to leave the Rabbitohs at the end of 2020 but after a fan petition to keep him at the club accumulated 2600 signatures, the try-scoring wizard was offered a new contract.

Against the Tigers on Saturday, Johnston crashed over for three tries to usurp Nathan Merritt as the Rabbitohs’ all-time highest try-scorer.

His voice quivering, Johnston reflected on the milestone moment that might never have happened if not for a committed group of red-and-green diehards.

“I’m still pinching myself,” an emotional Johnston said at full-time. 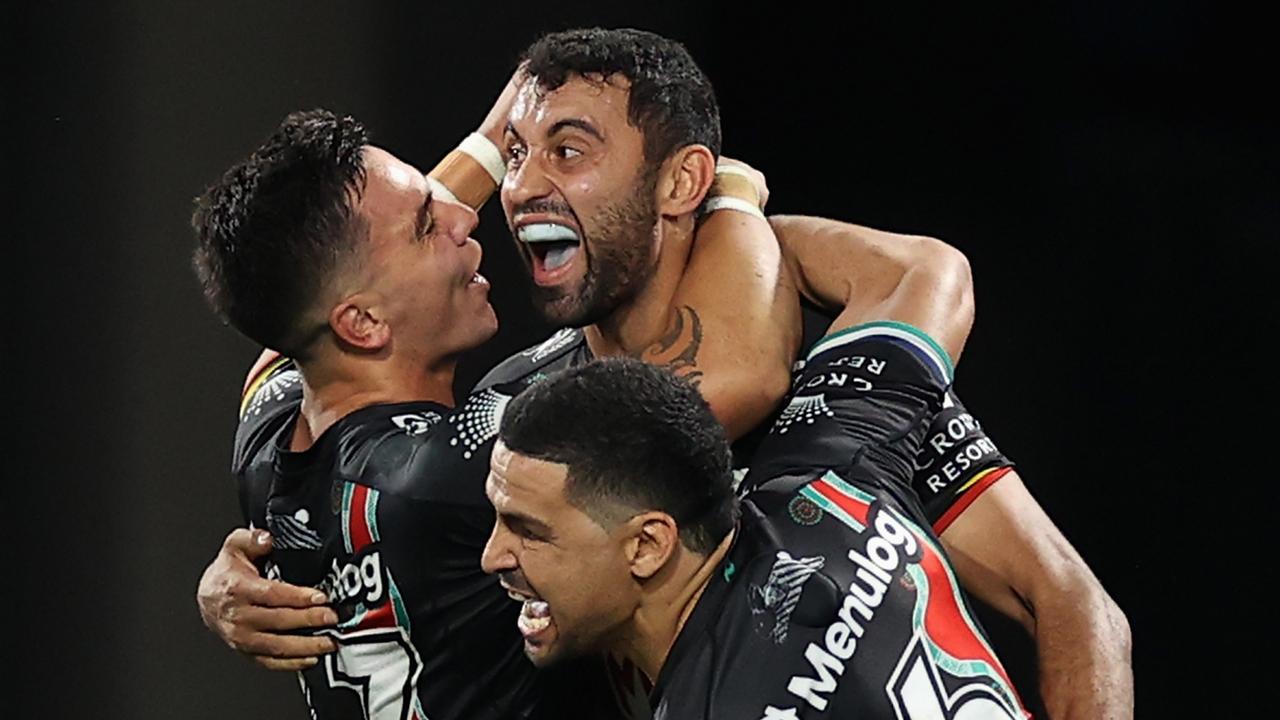 “Obviously we all know what happened a few years ago. I was almost not here. There was a petition going around that a lot of fans signed.

“I like to think that the top dogs had a look at that and said, ‘We might need to keep this bloke’. I’m very thankful for the fans for doing that. It all worked out. I’m just so happy.

“I think I’ve got plenty more tries to go to hopefully pay (the fans) back.”

A proud Torres Strait Islander man, Johnston said it was extra special to have broken Merritt’s record in Indigenous Round.

“When I came to the club (Merritt) was next to me in the locker room, him and GI (Greg Inglis). I was in between them,” he said.

“I thought: This is crazy. Two Indigenous blokes. “What a night to (break the record), in the (Indigenous) jersey. I don’t think I’ll take it off. I’m going to keep this jersey on for a week at least.”

When Johnston crashed over for his third try and broke the record, his partner in crime on the left edge Campbell Graham couldn’t contain himself.

“He just started screaming, ‘History! History! Record!’. I think he was more pumped that I was,” Johnston said. “It just goes to show the kind of club and teammates we have. We all care for and love each other. I’m just so thankful to be a part of it.”

The return of influential leader Cam Murray and some record-breaking Alex Johnston magic have inspired the South Sydney Rabbitohs to thrash the Wests Tigers 44-18 and snap their shaky run of form.

The loss will heap pressure on Tigers coach Michael Maguire; while the joint venture has been competitive in patches this season, there’s no getting around the fact that they’ve produced only three wins from 12 starts and sit in 15th place.

It’s hardly the result Tigers powerbrokers would’ve wanted when they showed faith in Maguire and kept him on for 2022.

Coming into Saturday’s clash, the reigning runners-up had already lost as many games this year as they did last season. They desperately needed a win before Murray, Damien Cook and potentially others were called away for Origin duty.

Another loss would’ve thrown the Rabbitohs’ finals hopes into serious doubt, given there are clashes with the Eels (twice), Panthers, Cowboys, Storm, Sharks and Roosters awaiting them. Alex Johnston (No.2) was swamped by teammates after breaking the record. Picture: NRL Photos

When the Wests Tigers opened up an early 10-0 lead against the run of play, Souths coach Jason Demetriou would’ve been watching through his fingers — he’d warned his troops this week that they couldn’t afford the slow start that ruined their chances against Canberra in round 11.

But despite trailing early, Souths composed themselves and reaped the rewards, running in six second-half tries to ensure they wouldn’t be slipping out of finals contention quite yet.

“It was pretty special from the boys to be down 12-0 (and come back),” Demetriou said. “Although at halftime we were behind, I didn’t think we were doing much wrong. We just tightened up in good ball. I thought we did that really well.”

With Murray back from a shoulder injury earlier than expected, the Rabbitohs managed to clean the errors out of their game and restore cohesion to their attack at close range.

Souths average a league-high 13.5 errors per game but only made eight on Saturday night.

“He’s Captain Courageous,” Johnston said. “Cam’s a legend. He does everything you could ask for in the middle. He definitely brings a lot.” Not to let Johnston have all the spotlight, Cody Walker also crossed the line twice. Picture: Getty Images.

With more respect for the ball came more opportunities to attack and the Rabbitohs’ left edge cashed in.

Johnston crossed for a hat-trick and overtook Nathan Merritt to become the highest tryscorer in South Sydney Rabbitohs history with 147 tries.

It’s now not so crazy to think he’ll break Ken Irvine’s all-time try-scoring record of 212; all he’ll need to do is average 14 per season for the next five years.

Johnston’s triple treat sealed the result for the Bunnies and proved a fitting way for the proud Saibai Island man to celebrate Indigenous Round.

“I’m still pinching myself,” an emotional Johnston said at full-time.

“I don’t want to play in any other colours. To score 147 in the red and green, it means a lot to me and my family. I’m just speechless at the moment.

“I love this club and to break this record is something I could never have dreamed of.”

Campbell Graham, Johnston’s co-pilot on the left, got in on the bloodshed and put the final touches on his case for Origin selection. The rangy Rabbitoh appears at long odds to beat Stephen Crichton or Kotoni Staggs to a Blue jersey but it’s safe to say he did all he could on Saturday evening.

He connected with Alex Johnston for three try assists and burrowed over for one of his own to give the Rabbitohs the lead for the first time all evening. His performance wouldn’t have escaped Brad Fittler’s notice.

The Wests Tigers’ goal line defence, so resolute for the first 40, couldn’t contain a South Sydney side hell bent on restoring some pride in the cardinal and myrtle.

Maguire admitted the second-half capitulation was tough to swallow but said he wouldn’t be discouraged.

“There were some disappointing tries out there. I’m not going to hide from that and the boys were disappointed with that themselves,” he said. “We’ve just got to keep rolling up and keep improving on what we’ve been doing.”

The real test will be whether the Rabbitohs can maintain their intensity in the Origin period without two of their most influential players on deck.

If they both back up, the pair will only miss South Sydney’s game against the Knights but if they’re rested, they may have to watch clashes with the Titans (in Queensland), Eels and Bulldogs from the sidelines. The Tigers’ struggles continue, with just three wins for the season after 12 games. Picture: Getty Images.

Demetriou subbed mid-season recruit Kodi Nikorima into fullback in place of Blake Taaffe for Saturday night and the move didn’t go to plan.

The former Warrior coughed up a regulation kick early in the second half and later slipped into touch attempting to defuse a Luke Brooks 40/20.

Demetriou held fast and only hooked Nikorima when the game was out of the Tigers’ reach.

The coach confirmed this week that Latrell Mitchell was on track to return from his hamstring injury after the bye as planned, so Saturday was likely always going to be Nikorima’s last game at the back anyway.

No Nofa, no cry

Saint, Sinner, Shoosh: The one club that can afford HaasCasualty Ward: Origin blow for Knights enforcer

David Nofoaluma has struggled to break back into the Tigers’ side since recovering from concussion and a 90-minute intercept try from the man who replaced him won’t help his cause.

Just as the Rabbitohs looked prime to cash in on their early momentum, Asu Kepoa picked off a Lachlan Ilias pass and sprinted 90 metres to open the scoring for the Tigers.