The Broncos have again been forced to defend the club’s culture after Selwyn Cobbo became the fourth player to appear in court for driving offences. Is Brisbane the worst-behaved team in the NRL?

The Broncos have rubbished suggestions they have a toxic culture after young gun Selwyn Cobbo became the latest Brisbane player to express remorse over an off-field indiscretion.

Broncos teammate Keenan Palasia has revealed Cobbo formally apologised to the entire playing group on Tuesday morning following his appearance in a Queensland court on Monday on road offences.

The 19-year-old was charged with driving an unregistered and uninsured vehicle while on a suspended licence, with the Broncos informing the NRL integrity unit of the offence when it occurred a fortnight ago.

Cobbo, who has been disqualified from driving for six months and fined $700 with no conviction recorded, returned to Broncos training on Tuesday to prepare for Friday night’s Magic Round clash against Manly at Suncorp Stadium.

The Cobbo driving offence was Brisbane’s 13th off-field incident in the past three years - the worst behavioural record of any club in the league.

Three other Broncos - Payne Haas, Tesi Niu and TC Robati - have previously appeared in court in relation to driving offences, with Niu having amassed 18 demerit points by the age of 19.

But Palasia launched a passionate defence of the Broncos, whose culture again came under the spotlight last month when Haas and Albert Kelly were embroiled in the ‘Shoe-gate scuffle’ that saw the duo fined and suspended by the NRL. “I wouldn’t say there’s a culture problem at all,” Palasia said.

Referencing the Haas-Kelly altercation, Palasia added: “Everyone who has siblings fights with their siblings and we’re just like brothers.

“We see each other here every day and sometimes things get a bit heated, but there’s no culture problems.

“I wouldn’t say it (the Cobbo incident) is a distraction, maybe for the individual, but not for the team.

“As long as that individual is putting his best foot forward, that’s all we care about.” The teenage whizkid trained strongly on Tuesday at Red Hill and Palasia is confident Cobbo will not step out of line again as the Indigenous flyer marches towards NRL stardom.

“He came and spoke to Kev (Walters, Broncos coach).

“As far as I know, he wasn’t at training (on Monday) and then Kev let us know why. The club has dealt with that and now we’re looking to move forward. He knows he has made a mistake and I’m sure he won’t do it again.

“It’s definitely a lesson. Selwn would have learnt from that. He isn’t dumb, he knows what he has done and what he has to do to fix it.

“He has apologised to us and the club so as long as he doesn’t do it again, he will be OK.”

“Selwyn has acknowledged to the club that he made an error in judgement on this occasion,” he said.

“Selwyn understands he will need to make better decisions in the future, particularly when it comes to complying with road safety.

“We will continue to support Selwyn off-field, as well as on it.

“The club acknowledges the importance of road safety and respecting road laws, as does Selwyn.”

Cobbo has been disqualified from driving for six months and fined $700 with no conviction recorded after appearing in Nanango court on Monday on road offences.

The 19-year-old was charged with driving an unregistered and uninsured vehicle while on a suspended licence, with the Broncos informing the NRL integrity unit of the offence when it occurred a fortnight ago.

The revelation comes just days after Cobbo produced a scintillating two-try display to inspire Brisbane’s 32-12 defeat of South Sydney, underlining why he is one of the NRL’s most exciting backline prospects.

A contrite Cobbo admitted it was a harsh lesson as the Broncos were left to digest their 13th off-field incident in recent years.

Just last month, Cobbo’s teammates Payne Haas and Albert Kelly were involved in the infamous ‘Shoe-gate scuffle’ outside their team hotel on an away trip against the Bulldogs, leading to fines and suspensions for the duo.

“I know I’ve done the wrong thing and I take full responsibility for that mistake,” Cobbo said.

“I’ll learn from this and I will strive to make better choices in the future.”

Broncos CEO Dave Donaghy said: “Selwyn has acknowledged to the club that he made an error in judgement on this occasion.

“Selwyn understands he will need to make better decisions in the future, particularly when it comes to complying with road safety. We will continue to support Selwyn off-field, as well as on it.

“The club acknowledges the importance of road safety and respecting road laws, as does Selwyn.”

The Cobbo driving incident is the latest in a long line of drama involving Broncos’ players behaving badly, with the club registering at least 10 scandals over the past two years - the worst behavioural rap sheet of any club in the league.

Payne Haas and Albert Kelly came to blows after Brisbane’s round 2 win against Canterbury Bulldogs.

At the time of the Haas-Kelly affair, Donaghy denied the club had a culture problem but admitted he was focused on cleaning up Brisbane’s image.

“It’s too far to say we’ve got a culture problem,” he said in the lead-up to his one-year anniversary in the job.

“A fortnight ago, they were saying how good we were going (after a 2-0 start to the year). But that’s footy. It’s never as good as it looks and it’s never as bad as it seems.

“The players are good people, they’re well intentioned. But they can fall back into bad habits and behaviours at any time. That’s the journey we’re all on, it’s not where we’re heading or what we are.

“In this instance, they’ve let themselves down and they’re disappointed by that. We all are. We need to learn from it.

“Outside of that, the NRL Integrity Unit has a process to run and it’s important to let them do that.” 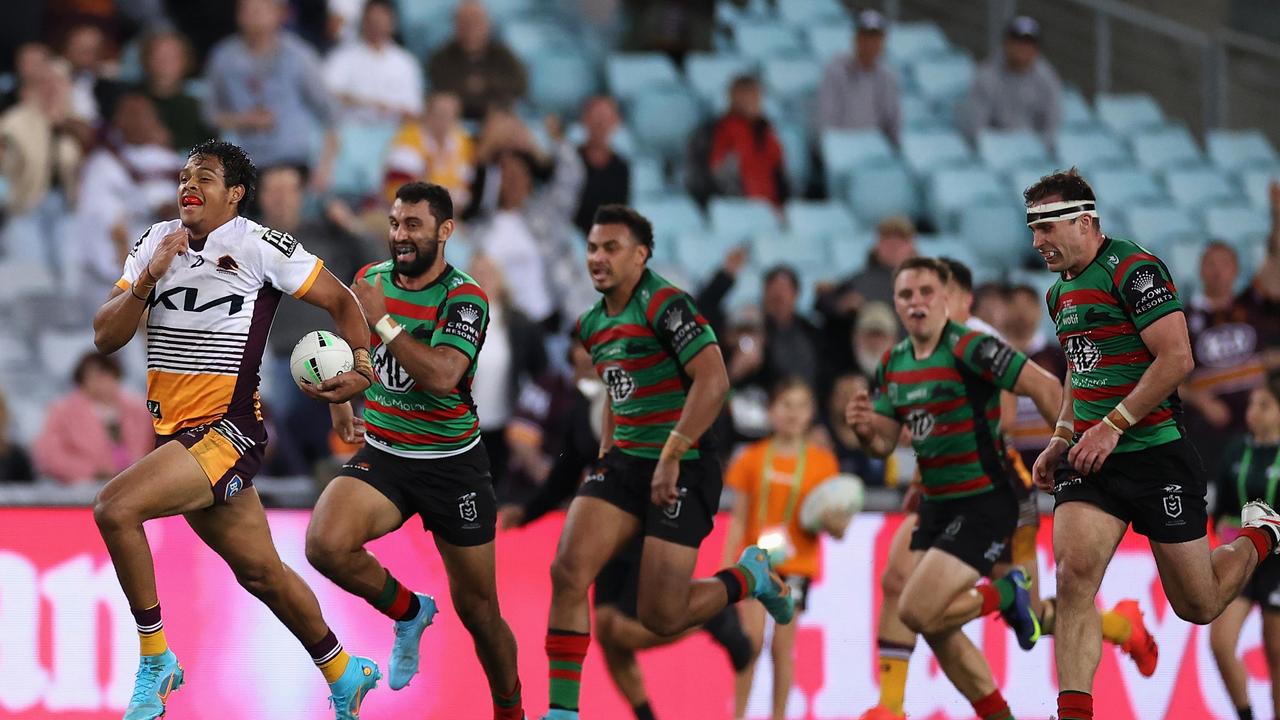 The Broncos’ disdain for rules was never more apparent than in August, 2020, when 10 players were fined a total of $140,000 for breaching the code’s strict Covid protocols.

Broncos chairman Karl Morris last month dismissed suggestions Brisbane were the bad boys of the NRL and had a culture problem.

“I have no concerns about our culture at all,” he said.

“Our squad as a whole are well-behaved young men.”

Cobbo is particularly disappointed as the Broncos are currently in talks on a $2 million upgrade for the wing teenage sensation to stay at Brisbane until the end of 2025.

Cobbo is off-contract at the end of next season and has attracted interest from seven clubs, including Wayne Bennett’s Dolphins.