Under pressure of losing his Kangaroos and Maroons No.7 jerseys, Daly Cherry-Evans has no intention of going down quietly, ahead of his return to Suncorp Stadium in Magic Round.

Daly Cherry-Evans has outlined his plan to captain Queensland until 2025 as the in-form Manly ace prepares for an Origin-style showdown with Broncos halfback rival Adam Reynolds.

Cherry-Evans’ halfback tussle with the fit and firing Reynolds will be one of the marquee personal duels of Magic Round when the Broncos and Manly face off at Suncorp Stadium on Friday night.

Cherry-Evans returns to Suncorp, the scene of his 2020 Origin heroics, in the best form of his career. His game-management and remarkable precision kicking are tributes to a 270-game veteran who now has time to make split-second decisions and has mastered the art of playmaking in the NRL.

The Maroons maestro leads the NRL for kick metres with 4090m, just 6m ahead of Reynolds (4084) as the thirty-something champions brace for a scrumbase tactical battle at Suncorp.

Cherry-Evans turned 33 in February but Manly’s decision to hand their captain a two-year extension is evidence ‘DCE’ is confident he can emulate Maroons halfback predecessor Cooper Cronk and fire in the NRL beyond his 35th birthday. 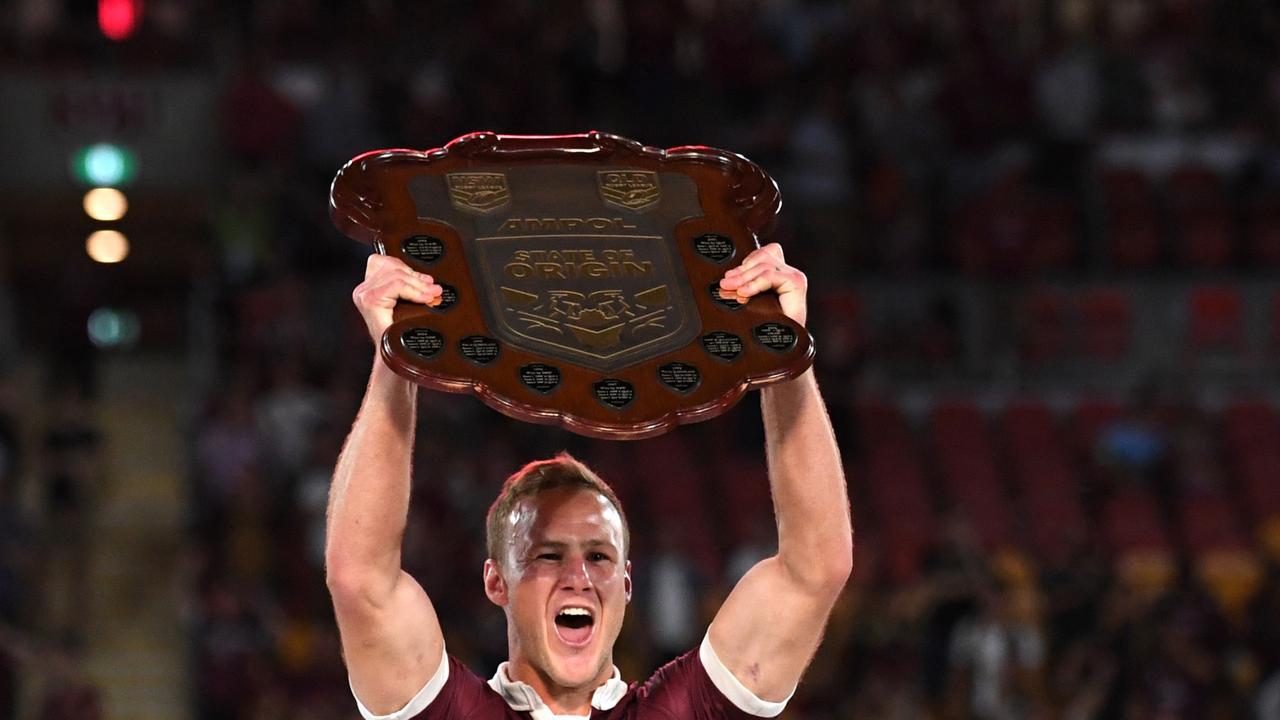 Cherry-Evans led the Maroons to a fairytale Origin victory in 2020.

Aside from Reynolds, Cherry-Evans is equally wary of the playmaking threats gunning for his representative jumpers.

In the Test arena, Penrith maestro Nathan Cleary is eyeing off the green-and-gold No.7 jumper.

At Origin level, Queensland whizkid Sam Walker is on the rise at the Roosters and underlined his cool head under pressure with his match-winning heroics to break the Broncos‘ hearts in round 5.

After three years in Origin exile, Cherry-Evans has been Queensland‘s halfback mainstay since 2018 and he plans to keep it that way for another three years.

“It’s great to see other halfbacks doing well, but I’m up for the challenge,” Cherry-Evans said.

“Competition is great in any walk of life and it’s certainly bringing out the best in me.

“I actually enjoy people comparing me and Nathan Cleary and I love watching him play. He‘s top shelf. We’re at different stages of our careers, he’s got the world at his feet, but there’s a World Cup at the end of the year and that’s part of my goal.

“In terms of Origin, it’s really pleasing to see the evolution of Sam Walker. It’s important that Queensland’s stocks are healthy and it’s great to see young playmakers such as Sam and Tommy Dearden coming through.

“But their development doesn‘t change the fact that I love playing for Queensland and I’m still as passionate as ever about wearing the Maroon jumper for as long as I can.”

Cherry-Evans’ competitive fire has been stoked by the ultimate Origin rollercoaster ride of the past 18 months. 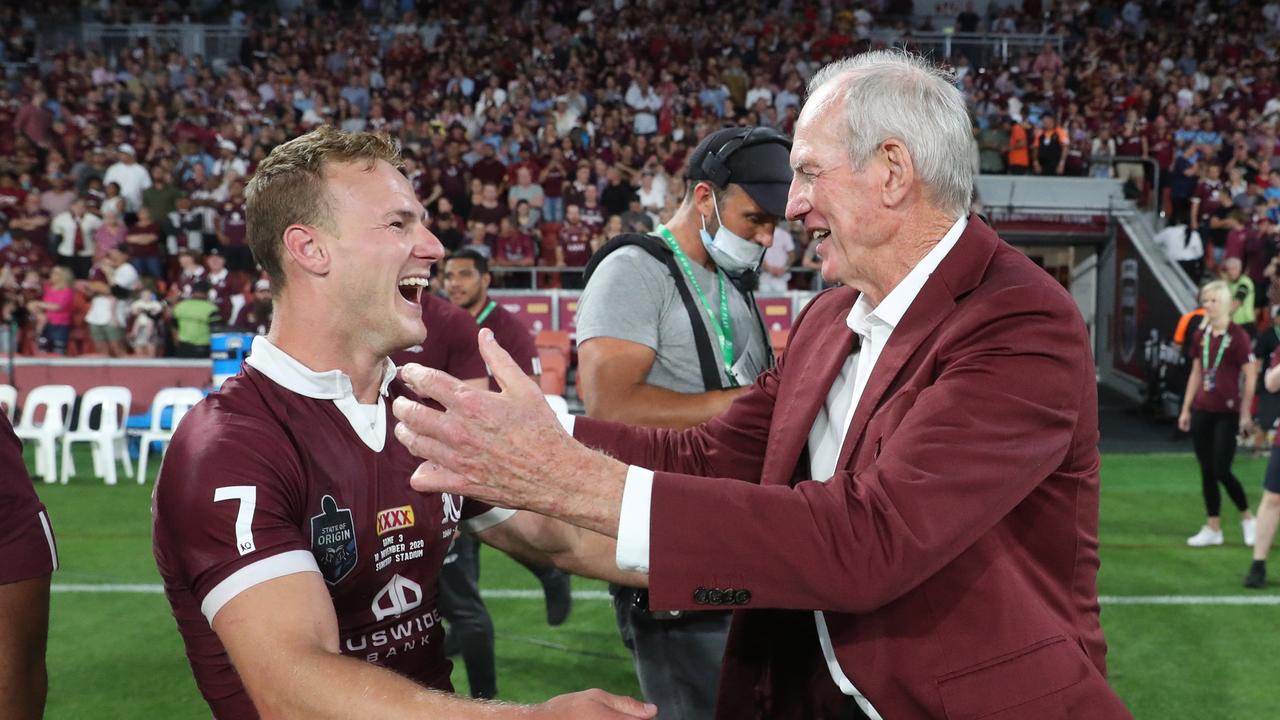 Cherry-Evans and Wayne Bennett masterminded Queensland’s massive upset of the Blues in the 2020 decider at Suncorp.

In November 2020, the veteran of 16 Origin games celebrate his career highpoint when he skippered Queensland to the biggest series boilover in interstate history as super coach Wayne Bennett returned with 14 debutants to stun the Blues.

Within eight months, Cherry-Evans was digesting the pain of Queensland’s horror 2021 campaign. Under Bennett’s coaching successor Paul Green, the Maroons fell apart, suffering a record 50-6 loss in Game One in Townsville before surrendering the Origin shield with an embarrassing 26-0 shutout against a rampant NSW at Suncorp Stadium.

Cherry-Evans helped engineer a face-saving 20-18 victory in Game Three, but the wounds are still raw for the Queensland skipper.

“It was a really difficult series,” Cherry-Evans lamented.

“Personally, it was devastating. I went from the highs of captaining Queensland to a series win to the lows of watching NSW completely dominate us.

“We had so many dramas and things go wrong last year. We had injuries before Game One and then there was the Covid stuff (Jai Arrow‘s breach which saw him stood down for Game Three) and the selection issue with Ronaldo (Mulitalo, who was pulled out of the Queensland team for Game Two after an eligibility gaffe).

“I felt for ‘Greeny’. There was all sorts of speculation about him and the team, but I enjoyed being coached by Greeny. Unfortunately, we just lost our way and the Blues were too good for us across the series.

“But I’m a competitive person and if I get the chance, I want to right some wrongs this year.” Cherry-Evans takes on the Broncos in Magic Round in the best form of his career.

If Cherry-Evans sees out his new deal, he will be playing for the Sea Eagles at the age of 36. The baron of Brookvale is on track to play well in excess of 300 NRL games. If he plays every Origin game over the next four seasons, the skipper will finish with 28 Origin appearances for the Maroons. That would be a remarkable effort given his three-year absence during the Cronk-Johnathan Thurston scrumbase reign.

“I feel as excited as I was in my first season,” he said.

“I have never been one to sit back and get complacent. Naturally I am the sort of person who is going to get every bit out of myself as a footy player and make sure I don’t lose appreciation of how lucky I am to do it along the way.

“I am always grateful of every game I am getting and I feel like I’m in as good a shape as I’ve ever been fitness wise. I haven’t lost any speed just yet. I know it can be a matter of time before you have to start to learn different ways to play footy, but at the moment I am feeling really fit and strong.

“Some people see contracts as a deadline when you get older, but I won’t be afraid to keep playing it year by year, as long as I’m enjoying it and playing at a level that justifies a spot, then I’m going to keep doing it.

“I don’t know when my journey is going to stop or going to end.

“Trust me ... I will be playing for Manly, Queensland and Australia as long as I can.”

Bulldogs search is over as Gus finally gets his man

The Bulldogs’ search for a new head coach is over after finally landing in-demand Panthers assistant Cameron Ciraldo.