NRL 2022: Only Sydney club that can afford Payne Haas, Jarrod Croker not giving up hope

Canberra Raiders skipper Jarrod Croker is refusing to give up hope of another miraculous recovery from a career-threatening injury.

The latest setback has reduced one of the game’s toughest players to tears as he contemplates his future in the lime green jersey that he has worn so proudly in 292 NRL games.

This latest setback happened in such bizarre circumstances.

“I was sitting on the floor in the lounge room at home and reached above my head to get the TV remote control,” he explained.

“Then the shoulder just came clean out on me.

“I was on my hands and knees in pain until the doctor arrived about 40 minutes later and put it back in place.” Jarrod Croker is refusing to give up hope, as injuries keep him sidelined and short of 300 NRL games. Picture: Getty Images.

The 31-year-old centre dislocated the shoulder three weeks ago but was hoping to make his comeback this weekend against the Parramatta Eels after intensive rehab.

An operation and five months on the sideline now look like the only option — the same as Tom Trbojevic.

“I was in tears,” he said. “It was emotion as much as the pain as you fear the worst.

“It was more about what playing footy and the Canberra Raiders still mean to me.

“I love the club and I’m still passionate about playing. Footy is all I know. It’s all I’ve done since I was a kid.”

Croker missed the last three months of last season for a knee injury that required off-season stem cell surgery. He has played only one NRL game this year.

He will see a surgeon on Wednesday for the full diagnosis on the shoulder.

The Canberra skipper is under contract for next season and refuses to rule out playing again.

“The club’s done so much for me over such a long period of time,” he said.

“That’s why I want to keep fighting. Sticky and I have become great mates and I’ve got the same passion as he’s got for the club.”

In a lovely touch as rugby league celebrates Indigenous round, the Roosters are proposing to put the ashes of former Sydney Roosters premiership-winning captain Arthur Beetson in a time capsule that will be placed underneath the playing surface at the new Allianz Stadium. Beetson was the first Indigenous sportsman to captain his country.

The Broncos have finally re-emerged from years in the doldrums under Kevvy Walters. And then Payne Haas threatens to ruin it. He’s not happy being on $750,000 a year. What a disrespectful human being to have around a football club.

There are issues around player fallouts at two NRL clubs as pressure builds over poor form in recent times. Players live in each other’s pockets for 10 months of the year and this is not uncommon. However, a five-eighth and a hooker at one club are barely on speaking terms. At another club, a halfback and a winger don’t get on – and it’s the talk of the team. We will keep you posted. The Wests Tigers are likely the only Sydney NRL club that could afford Haas should he leave Brisbane. Picture: Getty Images.

There is probably only one NRL club that can afford front-rower Payne Haas if he leaves the Brisbane Broncos this year — the Wests Tigers. They have the space in the salary cap but don’t think he’s worth anything more than what the Broncos are paying him - $750,000 this year and $800,000 in 2023. Haas would actually lose out on the deal because of cost of living and house prices in Sydney are far greater than in Brisbane.

The best indication that Cronulla Sharks star Nicho Hynes will make the NSW State of Origin squad is that Blues coach Brad Fittler described him on a podcast last week as the NRL buy of the year, even ahead of Adam Reynolds at the Broncos and Chad Townsend at the Cowboys.

Royce Simmons standing in a queue at the bar to buy his own beers at Panthers on Friday night after completing his 300km charity walk. Dwight Yorke and Brian Lara were spotted playing golf together.

Childhood friends Brian Lara and Dwight Yorke having a round of golf at The Lakes. They bumped into Steve Waugh, who was there hosting his major charity day. Lara is in Australia for the funeral of Andrew Symonds.

Rugby league is becoming a young man’s game - faster, more explosive and physically demanding than ever before.

It’s no coincidence the three most impressive sides in the NRL this year – the Panthers, the Cowboys and the Broncos – have the three youngest rosters.

The Broncos have an average age of just 24.35 and only 876 games between them.

This compares with St George Illawarra, who have a roster that has played a combined 2005 games with oldies like Ben Hunt, Aaron Woods, Andrew McCullough and Josh McGuire. “Your body regenerates and bounces back quicker.”

Studies have shown there is a higher risk of certain injuries once footballers reach the average age of an NRL player, which is 24.5.

“Most of the niggling soft tissue strains come when you’re above that average age,” Seeney said

“A bit like Adam Reynolds now with his groin and hamstring problems. They definitely pop up more towards the end of your career rather than at the start.”

He uses the Penrith Panthers as an example, a club with an average age of 24.94.

“Penrith’s injury numbers over the past couple of years have been fantastic,” Seeney said.

“They’ve had all the young guys coming through and they can cope with the demands better than some other teams.”

The South Sydney Rabbitohs are at the other end of the scale with an average age of almost 27, even allowing for the departures of veterans Benji Marshall and Reynolds at the end of last year. 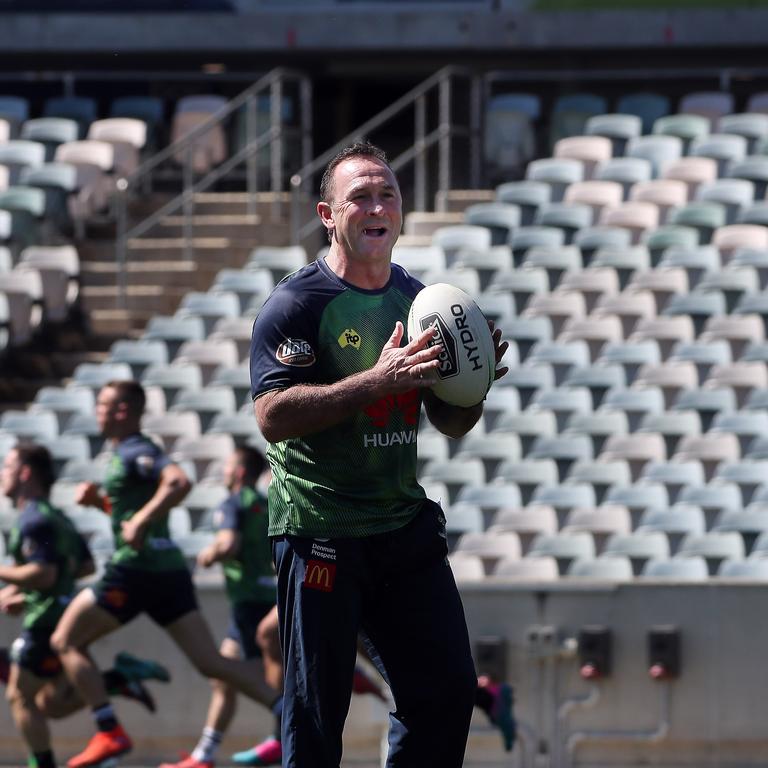 Canberra might be the home of federal politics but Ricky Stuart’s Raiders are doing no favours for our government leaders. In Scott Morrison’s last weekend as prime minister, Canberra knocked off Sco Mo’s beloved Cronulla Sharks in Magic Round.

Then in Anthony Albanese’s first weekend as a prime minister, the Raiders flogged Albo’s Rabbitohs in Dubbo. Albanese is a long-time fan and life member of Souths.

The Panthers have denied they have had to hire a personal bodyguard for superstar halfback Nathan Cleary on away trips.

It follows a recent Instagram post from Brisbane based security guard Todd Lane during Magic Round in which he posted a selfie with Cleary and the comment: “Not every day you get to personally guard Nathan Cleary. Very humble guy and an honour to help out. #perksofsecurity.” We initially thought it was a move to prevent a repeat of what happened in Queensland last year when police charged Cleary’s team mate, winger Taylan May, with assault occasioning bodily harm from an incident in which he was sticking up for Cleary.

He has pleaded not guilty but it is still before courts.

It was more a case of a security guard wanting his moment of fame. The Newcastle Knights and the Canterbury Bulldogs are in a four-way battle to sign Parramatta Eels utility forward Ryan Matterson.

Matterson was in Brisbane last week to have lunch with Dolphins coach Wayne Bennett, who is desperately keen to sign him long-term.

The Eels can ill afford to lose him, having already lost Isaiah Papali’i to the Wests Tigers and Marata Niukore to the New Zealand Warriors. 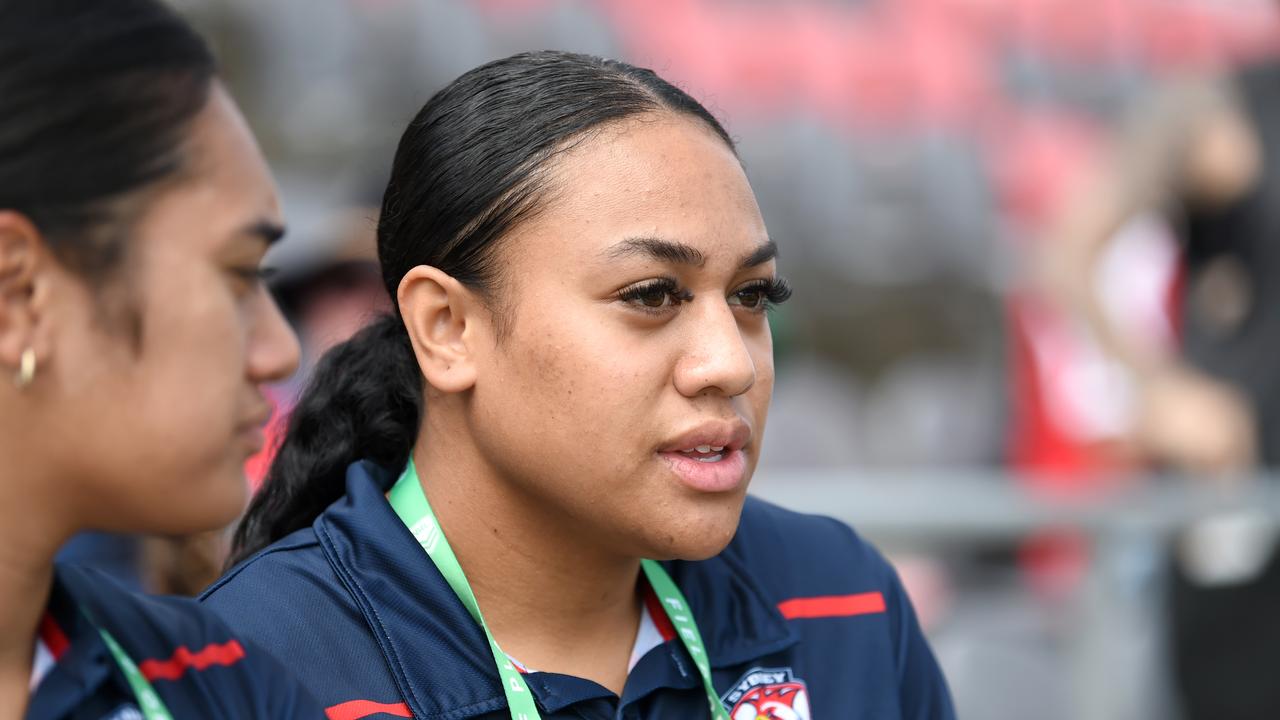 Another Hopoate is making headlines in rugby league. This time it’s the impressive daughter of notorious bad boy John Hopoate who has made the City Under 19s rugby league team.

Kalospiani Hopoate, a prop from the Indigenous Academy Sydney Roosters in the Tarsha Gale Cup, was named in the squad last week.

Kalospiani was a member of the Roosters team that beat Newcastle 12-10 in the grand final of the Tarsha Gale cup in April.

The City team will compete for the Harvey Norman Women’s National Championships at Pizzey Park on the Gold Coast on June 9.

No NRL player has done more for the indigenous cause than Anthony Mundine. He spoke out before anyone else and paved the way for all indigenous Australians at a time when he was chastised for doing so.

It’s only fitting that Mundine has been invited to lead his old club St George Illawarra onto the field against the Bulldogs alongside another great indigenous athlete Ricky Walford.

Rabs told us during the week he is still undecided.

A Nine executive says the 78-year-old will be given until the day of the game to make his decision.

It doesn’t matter that Rabs hasn’t called a game all year. They have Matt Thompson on standby for what would be his first Origin game. Times have certainly changed in the rugby league media. Legendary journalist Geoff Prenter last week stumbled over an old contract from 1977 at 2UE to call the football with Col Pearce. Then editor of Rugby League Week, Prenter was paid just $25 for the radio gig.

Ray Hadley changed the game forever when he quit as a taxi driver and auctioneer in the 80s.

By 2002 after joining 2GB, Hadley was on a $2 million deal to do the morning show and call the football on the weekend Continuous Call team. The former Manly and South Sydney Rabbitohs forwards is regarded in the corporate world as one of sport’s sharpest business minds.

Manly chairman Scott Penn has revealed Mestrov, 52, was previously interviewed when the job was last advertised three years ago.

“Tony was firmly in the mix but he didn’t quite have the hardened chief executive’s experience,” Penn said.

“Since then he has done an incredibly good job with greyhound racing to lift the profile of the sport.

“He’s a Manly man and a really impressive guy. It was a no-brainer this time.”

Manly has had much front-office upheaval in the last decade.

Originally published as NRL 2022: Only Sydney club that can afford Payne Haas, Jarrod Croker not giving up hope