A contract dispute which has led to explosive allegations of a fresh Payne Haas off-field scandal may be all about money, but it’s something else entirely that will decide the big Bronco’s future.

Brisbane prop Payne Haas is being sued for $200,000 by his former manager as explosive allegations emerged of the NSW Origin enforcer covering up another off-field scandal that saw him fined by the Broncos.

Court documents obtained by News Corp show Haas stands to become the highest paid forward in the NRL on a mega $5.75 million contract, but the deal remains in limbo due to the prop’s legal dispute with his ex-agent Chris Orr.

Haas commenced legal proceedings against Orr, alleging in part that the Broncos prop was not being paid market value on his current Brisbane deal, which expires at the end of 2024.

But in a counterclaim lodged by Orr in the NSW supreme court last month, the veteran agent believes he is owed $201,200 in management fees by Haas, who severed ties with Pacific Sports Management late last year. Payne Haas is being sued for $200,000 by his former manager Chris Orr. Picture NRL photos

In another claim, Orr alleges Haas was caught driving without a licence and using his mobile while driving in April 2019. It is alleged Haas failed to notify the Broncos, who later served the prop with a breach notice, fined him $10,000 and ordered the forward to undertake a safe-driver course.

The Broncos released a sttement confirming that the club had spoken to the NRL Integrity Unit today in relation to the matter and claimed that “the Integrity Unit has confirmed that the club’s reporting and processes in dealing with the incident, which included a formal process, were appropriate, and no further action is required.”

The infringement came just eight weeks after Haas’ first strike with the Broncos, when he was suspended for four games and fined $20,000 for refusing to fully co-operate with the NRL integrity unit in relation to two off-field incidents involving family members.

Haas was then embroiled in a third scandal in January last year when he was arrested at Tweed Heads for intimidating a female police officer, prompting a $50,000 fine from the NRL and a fresh three-match suspension. He pleaded guilty and was given a two-year good behaviour bond, with no conviction recorded.

Haas’ legal wrangle with his former manager comes at a time when there is mounting speculation over his future at the Broncos, whose board have approved a six-year extension for him to remain at Red Hill until the end of 2027.

But with Haas refusing to ink the six-year upgrade - largely because of his fallout with Orr - the NRL’s No.1 prop has been linked with an eventual move to the Roosters because of his friendship with Sonny Bill Williams. 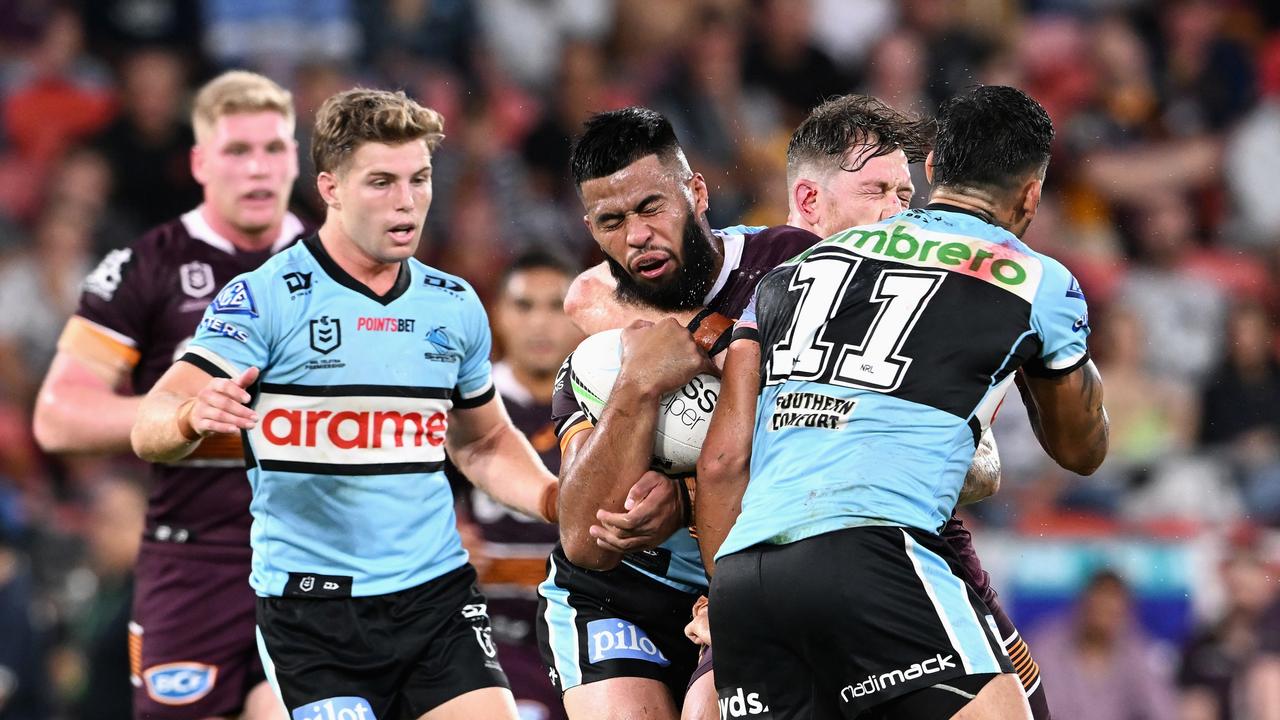 Haas stands to become the highest paid forward in the NRL, but the deal is being held up due to the legal dispute with Orr. Picture: Getty Images.

Roosters legend Williams helped Haas with his conversion to Islam in 2019, fuelling a belief he could eventually deliver Brisbane’s best player to Bondi.

In his counterclaim, Orr reveals that in July last year, he negotiated a new Broncos contract which, if signed by Haas, would have secured the player a salary package of $5.75 million, worth an extra $402,500 in commission for the agent.

According to the counterclaim, Orr stood to potentially pocket a total of $603,700 from Haas, who last month signed with another NRL agent, Tyran Smith.

In total, his Broncos package is valued at $5.75 million. Orr also alleges Haas was caught driving without a licence and using his mobile while driving in April 2019. Picture: Jerad Williams

Haas recently joined the management stable of former NRL player Smith, the father of Storm centre Reimis, who has been gauging the prop’s value in the marketplace.

Bulldogs football boss Phil Gould has told Haas he is not worth $1 million, but Brisbane’s package is evidence that if the 22-year-old wishes to remain at the Broncos, he would not be short-changed.

“Everyone knows Payne and his value here to the club,” he said.

“We are really happy to have him here and we have him here for the next three years and I want to make sure Payne is happy playing here at the Broncos.

“I have never been concerned about the money and it won’t be an issue with money going forward.

“Payne’s value is what clubs want to pay for him. I’m very confident he will stay. He loves it here and I’m sure we can come to an agreement to keep him here.”

Former Broncos captain Corey Parker, who worked with Haas in an assistant’s capacity under ex-coach Anthony Seibold in 2019-20, says the prop is not merely chasing dollars, but premiership success.

“The challenge for the Broncos to keep Payne is real,” Parker said.

“There’s not much more they can do really. The Broncos have offered him a six-year deal that is reflective of where he is at. Payne could get 15 offers from other clubs, so then it’s not all about money anymore, it’s about opportunity and achievement.

“There is no way Haas is underpaid, and the deal he is being offered is a great deal, so if he leaves Brisbane, it won’t be because of the money.

“Payne is worth what someone is willing to pay him. I don’t think middle forwards should be paid $1 million because they don’t own the result, the playmakers do that. But if Payne can get $1 million from the Broncos or another club, good luck to him.

“When you first start in the game, your currency as a kid turns to how much you can get paid. Then you have ambitions to play rep footy, Origin, Australia.

“The ultimate currency for a player is to win a premiership. So if Payne is getting well paid at the Broncos, which he is, then his burning ambition is simply one thing - can I win a premiership at this club?

“That’s the reality for the Broncos.”