The NRL’s historic American dream could be a reality, with ARL Commission boss Peter V’landys bound for the USA in August.

The NRL’S American dream is closer than ever before with Peter V’landys bound for the US.

The ARL Commission chair will ramp-up the code’s long-held view of staging an NRL premiership game in America by flying to the US in August.

V’landys will use the business trip to conduct further research on the feasibility of the landmark game by meeting with local government officials and key stadium executives.

The ARL chair’s scheduled US-visit is the most significant step towards the NRL locking-in an historic match, as early as next season.

While details and plans remain in draft only, the NRL have a leaning towards staging the match in round two of the season.

The NRL would likely give one team the bye in round one and the other team the buy in round three. The NRL plans to use Hollywood stars Hugh Jackman, a Manly fan, and Souths co-owner Russell Crowe to help sell the game to the American market.

In his additional role as Racing NSW CEO, V’landys confirmed he was headed to America to meet with business associates within the racing sector, but would also hold talks in Los Angeles regarding the prospect of playing an NRL game on the west coast.

The trip will also serve as a reconnaissance mission for prospective venues for the game.

News Corp understands that V’landys has been further encouraged to push ahead with the plan after receiving high-level support for the game at the State of Origin game on Wednesday night.

The fact he will use his American trip to conduct further inquiries shows how serious the commission is about making an impression in one of the the final frontiers for the game.

Rugby league has tried and failed to crack America over the years but V’landys is confident the game can generate enough interest to vindicate the cost and inconvenience of sending two sides around the globe. 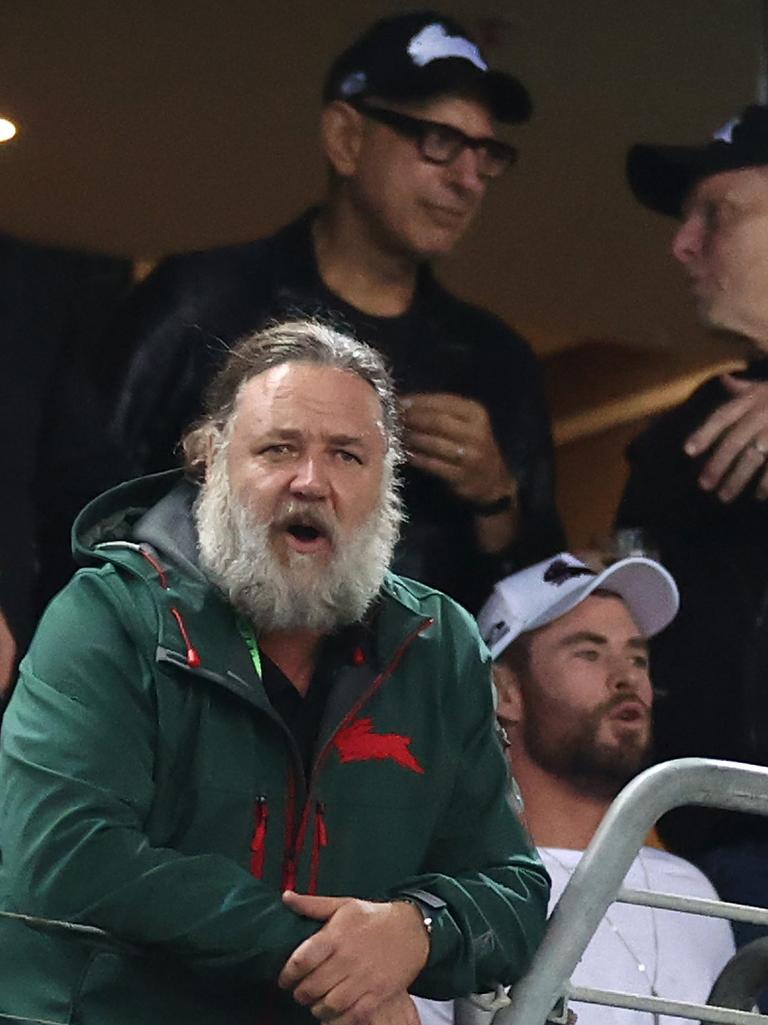 The NRL plans to use Russell Crowe and Hugh Jackman to help sell the game to the American market. Picture: Getty Images. 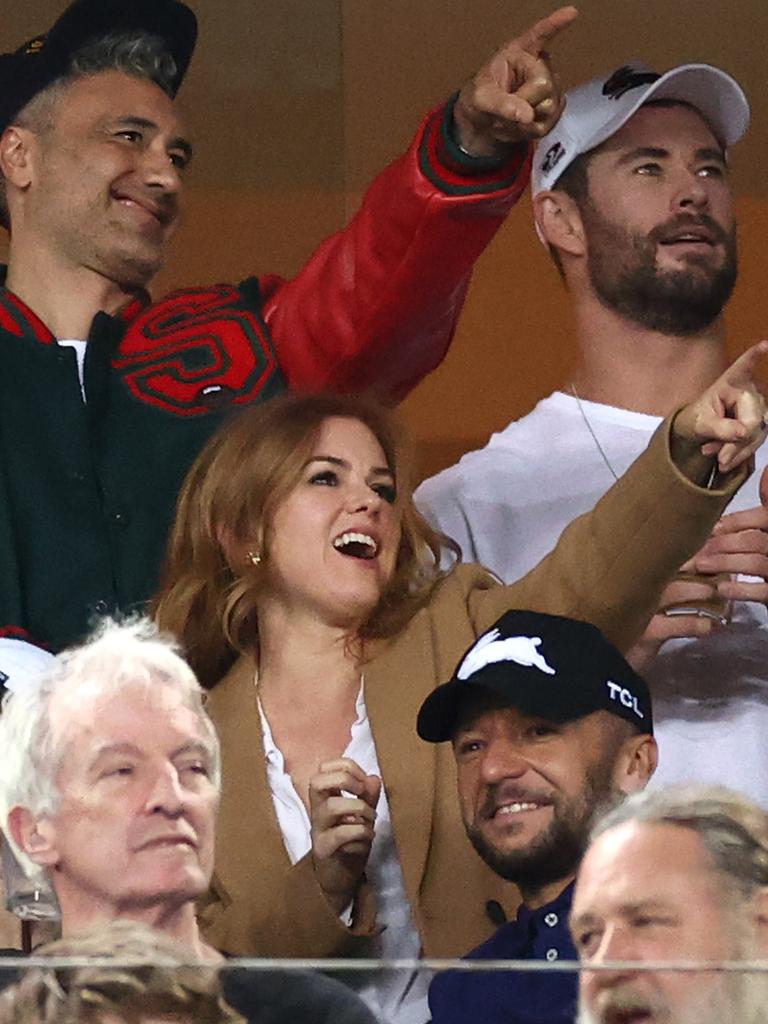 “While I am there I am certainly going to take the opportunity to investigate matters related to the game in LA and meet up with some people because I just think it will be great for the game,” V’landys said.

The one and only time a top-level rugby league game was played in America was in 1987, when a fourth State of Origin game was held in California.

The game filed to capture the imagination and America has been a rugby league wasteland ever since.

The commission wants to revisit the concept after initial work was conducted on opening the season - it was called Round Zero - in Los Angeles under former chief executive Todd Greenberg.

The discussion went into hibernation but it has been revived in recent months with a view to playing a game in Los Angeles in round two next season.

The addition of The Dolphins next season as the 17th team has given the NRL the opportunity to use the bye to ease the burden on the respective teams involved.

The players union has risked the ire of the NRL after claiming an early $30 million victory in pay talks and vowing to continue to interrogate the financial claims of head office.

The Rugby League Players Association sent an email to the playing group on Thursday outlining that they had secured an additional $19 million - they had already been promised $11 million - as a result of their “financial interrogation” into the game’s revenues over the past three years.

The NRL says it was due to conduct the review at the end of the 2022 season but agreed to give the players early access to their books in a show of good faith.

The money effectively reimburses the players for cuts they took during the Covid crisis in anticipation of the NRL suffering financially. The financial hit wasn’t as bad as expected, meaning the players were able to claw some money back. RLPA boss Clint Newton confirmed the players have secured $30m in back pay from the NRL. Picture: Getty Images.

“Whilst that (the $11 million) was welcome news, it caused us to interrogate the exact revenue performance of the NRL, to ensure compliance with the agreement that was reached under the CBA revisions,” the statement read.

“The additional $19m has come as a result of the financial interrogation the RLPA undertook on your behalf, along with the assistance of auditors.”

The RLPA and NRL had delayed talks over the salary cap for next season and beyond while they mopped up the past. Now those details have been finalised, the parties will begin working on finalising player payments for next season.

“We have all worked hard to stabilise the game and grow revenues,” NRL chief executive Andrew Abdo said.

“We have shown loyalty to our partners and they have stood by us. We have had fans supporting us and been fortunate to have great attendance at games.

“As a result our revenue performance in 2021 and forecast for 2022 is better than anticipated. That’s good news for the game and good news for players.

“We are required to make this calculation and payment in 2023 at the end of the three year period. In good faith, we have brought this forward on our own initiative to provide earlier payments back to players.

“The NRL always engages external auditors to verify the numbers and through that process and our strong performance for the first half of 2022, we are in a position to make an earlier payment.” The NRL originally offered $11m, but the RLPA managed to secure an additional $19m after some ‘financial interrogation’. Picture: Getty Images.

The ARL Commission told club chairs and chief executives at a meeting on Wednesday that they planned to start the cap at $10.5 million next season, a minimal increase on what it was scheduled to be before Covid caused widespread cuts across the game.

The $10.5 million figure is unlikely to sit well with the players or some clubs. For the moment though, RLPA chief executive Clint Newton was celebrating a victory for the players.

“Only as a result of the thorough process our team has undertaken, and will continue to work through, has the amount owed to players nearly tripled,” Newton said.

“This is great news but we still have to investigate further to ensure the amount you are owed under the CBA is accurate and evidence-based.

“Our job is to undertake the proper due diligence on your behalf to ensure you receive what you are entitled to under the CBA. It will also be important in ensuring that the cuts that you have taken were fair and based on accurate financial information.

“We will continue to interrogate the NRL’s financial information and ultimately determine the exact benefits to be rightfully returned to players.”

The RLPA also fired a shot across the NRL’s bow by saying the delay in sharing the money with the players was due to head office twiddling their thumbs at requests to share the game’s finances.

Abdo said the players may yet be entitled to receive more reimbursement given this season still has months to run.

“We still have half a season to go and if we continue to outperform, everyone will share in that gain,” he said.

When the Roosters flop the rest of the NRL should worryCoaching carousel: Why chase the next ‘big thing’?

“I want us to have a great relationship with the players. There are always thing to improve on. We are working hard on growing revenues and also being responsive to our stakeholders.

“The next five years I want rugby league to set the benchmark for professionalism in sport and respect for all stakeholders.”