It’s the $2 million blueprint for success - and more proof Adam Reynolds is the buy of the year.
In a study of the individual salaries of all 16 clubs first-choice spine players - fullback, five-eighth, halfback and hooker - The Sunday Telegraph can illustrate how much it costs to be a finals contender.

It comes without surprise to reveal premiers Penrith spend the most of the entire NRL on their key playmakers with a combined $2.9 million spent across their four stars, Dylan Edwards, Jarome Luai, Nathan Cleary and Api Koroisau. Ten of the 16 clubs spend at least $2 million on their spine players. Tyson Gamble is being paid near bottom dollar - but has been a bargain find for the Broncos. Picture: Getty Images

The only sides inside the top eight that have spent less than $2 million on their spine are the Sharks and the Broncos.

The Broncos have been boosted with Martin’s re-emergence on a minimum wage deal shining in place of Tesi Niu.

Walters has also usurped Jake Turpin as the club’s first choice hooker.
The minimal outlay in their spine is a further example of Reynolds‘ class to catapult the Broncos up the NRL ladder in his first season with the club compared to their troubles over the past three years. 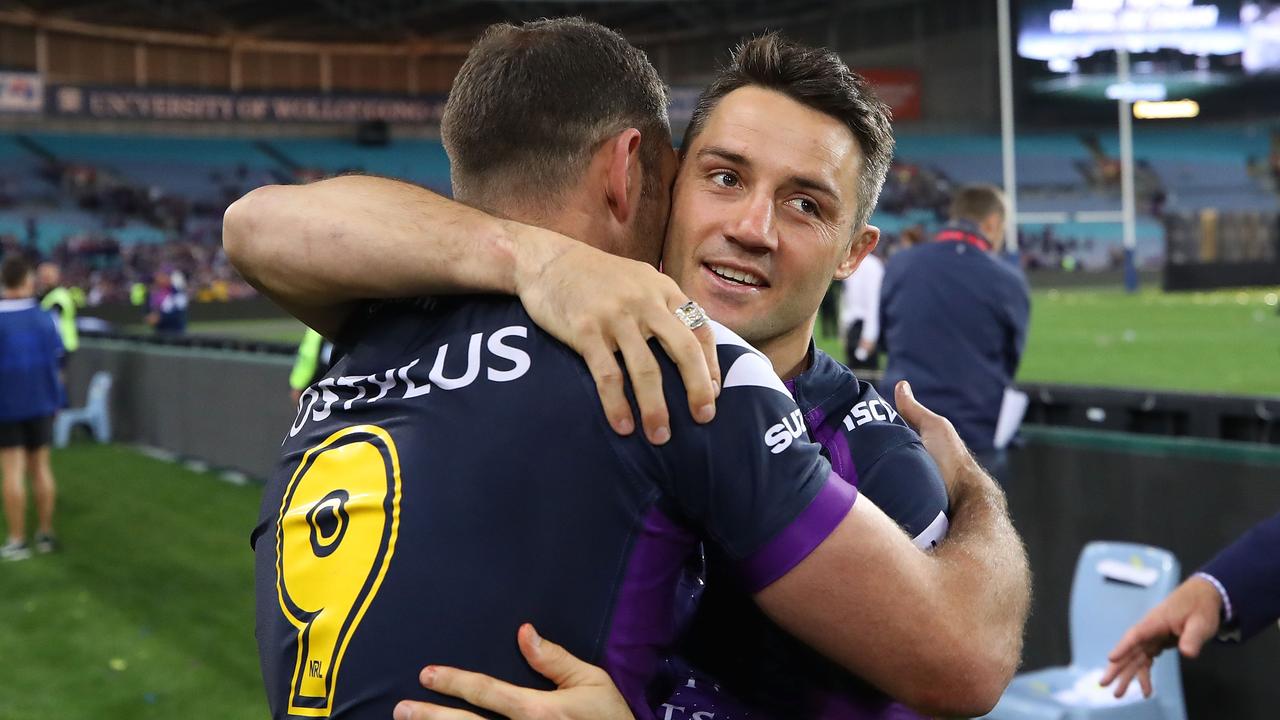 Cooper Cronk (R) and Cameron Smith (L) formed half of the best spine of the modern era. Picture: Getty

Underlining the impact of Reynolds on the Broncos is that the 15th and 14th ranked clubs for spine payments are the embattled Bulldogs ($1.5 million) and inconsistent Warriors ($1.55 million).
The Titans are 13th with an outlay of $1.65 million spent on their first-choice spine.
Anthony Seibold knows the Broncos better than most having coached the side through a difficult period across the 2019 and 2020 seasons.
He also knows the power of Reynolds and how the structure of a team’s salary cap must be geared towards the playmakers.
“I just know myself when I was at the Broncos, we had a really young spine,” Seibold said.
“What Reyno (Reynolds) has done for the Broncos and what (Chad) Townsend has done for the Cowboys, it is so considerable.
“It reflects how important it is to have those key guys in your spine.
“So it is important to have a big chunk of your salary cap tied up in those positions.”

Seibold, who previously worked as an assistant at the Storm, said the Melbourne franchise were the kings of spreading their salary cap to the right positions.

“I think if you just look at the Melbourne Storm model, when I was down there it was Billy Slater, Cooper Cronk and Cameron Smith, and then they just put a team of hard workers around those three guys,” Seibold said.

“If you look at what they have now with Jahrome Hughes, Ryan Papenhuyzen, Cam Munster and Harry Grant … all their money ($2.8 million) is invested in their spine again.

“I reckon that is a good way to look at it. When I coached at Souths we were heavily invested in Reyno (Reynolds) and Damien Cook was coming through.”

Peter O‘Sullivan, the man who has been tasked with building the NRL’s newest franchise, The Dolphins, said the most successful clubs are the ones who have developed a player from a base wage into a $1 million player. The Dolphins believe they have their own eventual blue-chip half in Penrith teenager Isaiya Katoa, who will join the club in their inaugural season.

“They make your football team don’t they,’’ O’Sullivan said.

“They don’t need to be million dollar players when they start out.

“Melbourne‘s spine are all million dollar players. They all started on $100,000. “The important part for them was they staggered them so Munster came in with Cronk, Slater and Smith. He grew.

“Then Hughes came in. He grew.

“Then Papenhuyzen came in. (Brandon) Smith was there the whole time at the start. Then Grant came in. You need to get the right balance.

“When they get to be as good as they are, you can’t always keep them. So it’s always nice to be bringing one in when you have the other three.’’