The Cowboys overcame the loss of star forward Jason Taumalolo mid-game with a knee injury to enhance their premiership credentials in a dazzling demolition of the Storm in Townsville.

The ruthless North Queensland Cowboys are the real deal in the race for the premiership. Make no mistake.

Despite losing stars Jason Taumalolo and Kyle Feldt to suspected serious knee injuries in the first half, the Cowboys destroyed the Storm 36-6 in front of a sell-out Townsville crowd to notch six wins in a row and send a stunning statement to the rest of the competition.

The Storm were without several injured stars — including Jahrome Hughes, Ryan Papenhuyzen and Nelson Asofa-Solomona — but they had no excuses in a dismal performance.

The Cowboys had their own huge hurdles to overcome, but jumped all over their opponents with class and power to record their first win over Melbourne since the 2015 preliminary final.

North Queensland back-rower Jeremiah Nanai made yet another emphatic claim for a Maroons jersey with two second-half tries as half Chad Townsend took complete control of the game. 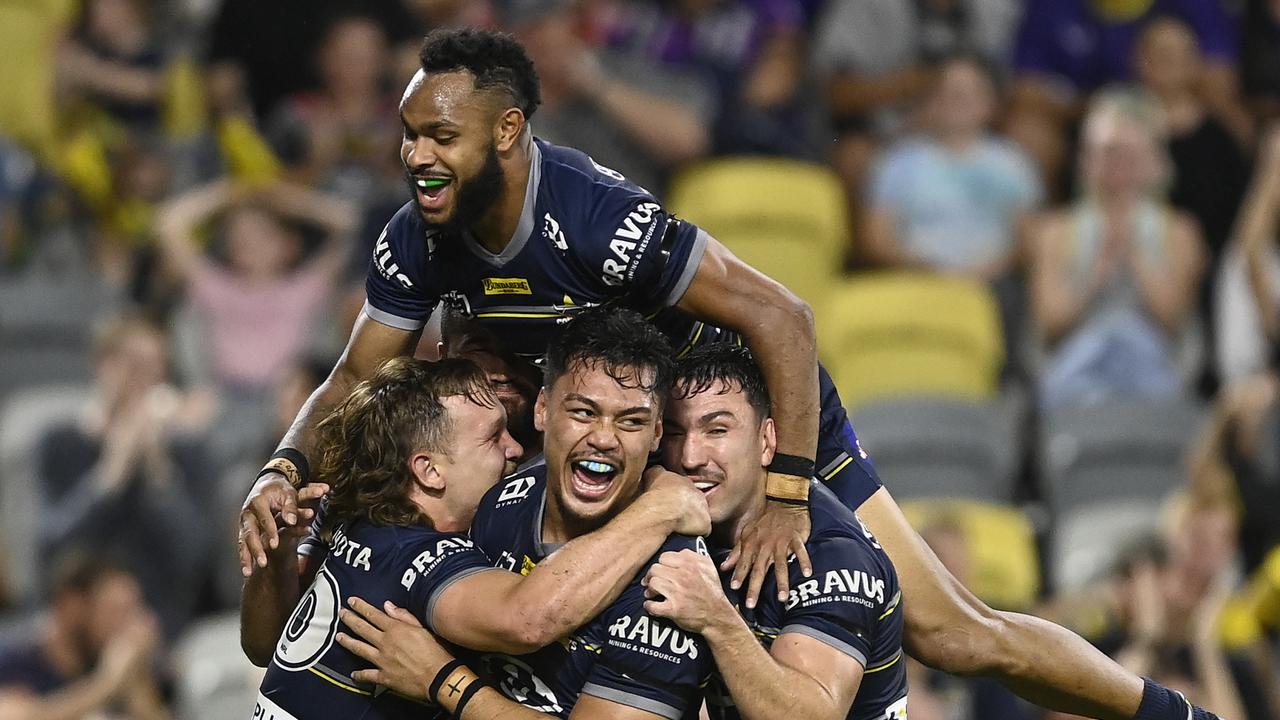 Leading 12-6 at half-time, the Cowboys scored four tries in 12 minutes with Nanai, blockbusting winger Murray Taulagi and fullback Scott Drinkwater on the end of a Cowboys blitz.

The Storm played hooker Harry Grant at halfback but the move was a flop in a disgraceful Melbourne display. The Cowboys pack, led by Maroons hopeful Tom Gilbert and a reborn Jordan McLean, dominated their opponents.

Storm coach Craig Bellamy said his players failed to roll their sleeves up or compete.

“Which really disappointed me. I am concerned,” he said. “We beat ourselves.”

Cowboys coach Todd Payten said he was “really proud” after his side’s shutout. The Cowboys have now conceded just four second-half points in the past six games.

“We keep fighting and there is a lot of care and fair bit of resilience in the team at the moment,” he said. “It was enjoyable. We had one player left on the bench. Thirty points in front with 20 minutes to go ... that doesn’t happen often.”

Feldt’s leg bucked underneath the weight of Brandon Smith and other Storm defenders in the 16th minute and he suffered a suspected high-grade MCL injury that looks set to keep him out of the State of Origin series for the Maroons.

That was bad enough, but when Taumalolo followed him with another suspected MCL complaint, with Smith again involved, the Cowboys were up against it.

“It’s terrible news for the Cowboys. Maybe Brandon Smith has to address where he is attacking the legs,” Fox League’s Corey Parker said at half-time while analysing the tackles. Bellamy defended Smith. “I didn’t see any problems to be quite honest,” he said.

“Feldty will be out longer and Jase will be touch and go for the weekend. I’ll be surprised if he comes up OK,” he said.

The loss of Feldt will be a cruel blow for his club and the Maroons, but the Cowboys have a genius on the other flank in Taulagi.

Taulagi, after scoring a double and setting up a try the previous week with the pass of the century, half-volleyed a Peta Hiku pass, put on a goose step and slammed the ball down with his left had to get the Cowboys going in the second stanza. He was the best winger on the park and totally outplayed Melbourne’s Xavier Coates.

“His name will be right in the frame for Origin selection,” Fox League’s Brent Tate said in commentary.

Cowboys tyro Gilbert, Dolphins bound next year, scored a cracking try that highlighted why he is regarded as one of the best young back-rowers in the game.

Snaffling a short dropout, Gilbert beat four Storm defenders to barge over for a try Fox League’s Greg Alexander said reminded him of the one Mark Geyer set up for Royce Simmons in the 1991 grand final.

Gilbert, who ran for 131m and made 31 tough tackles, has a raging mad gleam in his eye like Gorden Tallis once did. The Storm have been smashed in their last two games without Hughes.

The saying that you don’t know what you’ve got until it’s gone applies to the Melbourne half. He’s so often the man that drags the Storm out of the fire in critical moments, but the Storm pack was also underwhelming.

Whether this recent loss of form is just a blip on the radar or a sign of more underlying issues is a burning question Storm coach Craig Bellamy will want answered.

“We struggled in that [halfback] position last week and we struggled there again. It is obviously not [Grant’s] best position ... we probably got it wrong,” Bellamy said.

Revealed: The 10 Cowboys in Origin mix

The Cowboys have a stunning 10 players in State of Origin contention after a tackling overhaul transformed North Queensland into one of the NRL’s best defensive teams.

After surging into the top four, the Cowboys stunned the Storm with a crushing win in Townsville and will face defending premiers Penrith next week.

The games against the NRL’s top two teams could decide whether the Cowboys are premiership contenders or pretenders and they will also be the final two hit-outs before Queensland coach Billy Slater selects his team for Origin I in Sydney on June 8.

Slater is keeping a close eye on North Queensland’s Maroons contingent following the remarkable resurrection of the Cowboys in 2022.

Centre Valentine Holmes is a guaranteed selection while the likes of Kyle Feldt, Coen Hess and Hamiso Tabuai-Fidow are playing well and have featured in the Origin arena before.

Then there is the next generation of Queenslanders that have caught Slater’s eye with Murray Taulagi, Tom Dearden, Reuben Cotter, Tom Gilbert, Jeremiah Nanai and Heilum Luki firmly on the Maroons’ radar. 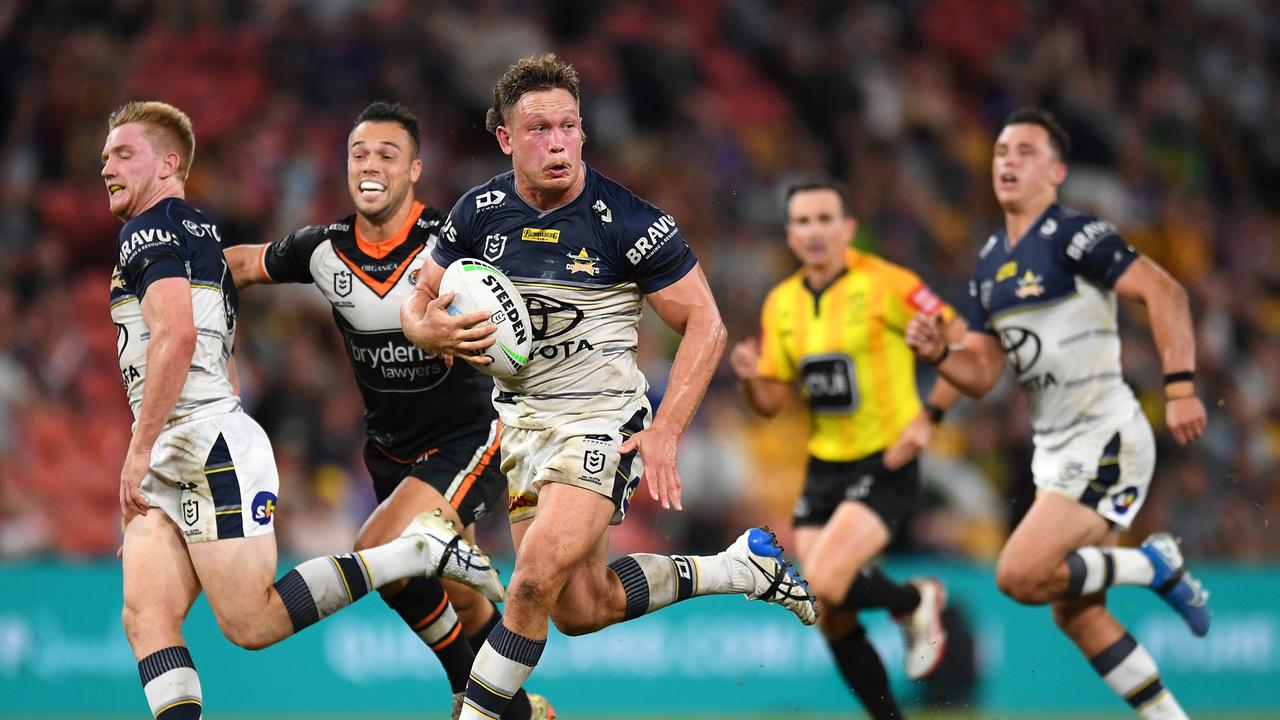 Payten said it was a positive for the Cowboys to have so many players in the Origin mix.

“It’s great for all of those individuals, the group, staff and club,” he said.

“I’d much rather coach a team that has Origin players in it and guys that are in the mix after doing the hard work. They deserve the acknowledgment they might get.

“I’m really optimistic and hopeful we can get as many players in as possible. We have a lot of players playing well.”

While the Cowboys have caught the eye with their skilful style, the North Queensland resurgence has been built on defence.

On their way to finishing 15th last year, the Cowboys were the NRL’s worst defensive team, conceding a staggering 748 points at an average of 31.2 per game.

Not even the wooden spoon-collecting Bulldogs had such a poor defensive record, leaking 710 points at 29.6.

In contrast, premiers Penrith finished the regular season as the best defensive outfit, conceding 286 points at 11.9 before tackling their way to a grand final victory.

Going into the round 11 clash with Melbourne, the Cowboys are the NRL’s second-best defensive team behind Penrith (116 points), having only leaked 125 points at 12.5 per game. The Cowboys have won seven of 10 games this season. (Photo by Albert Perez/Getty Images)

“I do (believe that defence wins premierships),” Payten said.

“For every try you let in you’ve got to score two to get in front. When you stop them it puts less pressure on your attack.

“We’ve also had better ball control which has allowed us to have more energy to put into our attack. Last year we made far too many errors which chewed up our gas. We have fixed that up as well.”

But how did Payten conjure such a dramatic turnaround in North Queensland’s defence in the space of one off-season?

“After our review at the end of last season, we looked at all the tries we conceded,” he said.

“The majority of them came down to missed tackles that should have been made, it wasn’t necessarily a system breakdown. That was all down to desire or a technical component.

“On the back of that we did a lot of tackling in the pre-season day after day. That’s been the whole shift in what we’re doing on the park.

“There was a change in the way we got more reps into them. We did it more often, indoors, outdoors, small groups, our edge defence, marker systems, short-side defence. There was a big emphasis put on that side of our game.

“The tackles that should have been made were down to guys probably not competing hard enough. We wanted to change that.” Jeremiah Nanai is in the Origin mix. Credit: NRL Images.

If not for a round 1 loss to the battling Bulldogs, the Cowboys could be sitting equal with Melbourne on eight wins this season.

While they did well to beat Parramatta in Darwin, the next two weeks will be North Queensland’s biggest test of the year and wins against the Storm and Panthers would confirm they are a genuine title threat.

“That’s not our mindset, we know we’re up against a really good team,” he said.

“What we can do is good enough, we just need to do it for 80 minutes against those teams. That’s where our challenge lies.

“We’ve got a pretty young group and they are doing a great job stepping up every week. Our leaders have also been playing well.

“We have to get all parts of our game right for the whole 80 minutes against the good teams. That’s our next step.

“They are the two best teams we have played to date. We can only beat who’s in front of us.

NRL doubles down on bunker ‘howler’King Cobbo: Immortal’s word of warning for Broncos

“We have a real chance to challenge our game. We believe our game is good enough and the players are really starting to believe that.

“We are excited about what’s ahead of us.”