The NRL has been routinely criticised for taking a slow approach with the growth of the women’s game, but the proof is in a product that this season smashed the AFLW for television ratings.

Expansion of the NRLW is set to be fast-tracked, on the back of outstanding TV ratings and greater skills on display in the women’s game.

Ahead of the NRLW grand final between St George and the Roosters at Redcliffe on Sunday, more clubs have indicated they want to be part of the competition.

The NRLW will have at least eight teams from next year and then 10 in 2024 — and there are plans for further expansion in 2025.

Stream every game of every game of the NRLW and 2022 NRL Telstra Premiership Season Live & Ad-Break Free In Play on Kayo. New to Kayo? Try 14-Days Free Now > In an exclusive interview with News Corp, NRL chief Andrew Abdo said the “positive response from players, clubs and fans” meant that there was strong interest from NRL clubs which are yet to launch their women’s teams.

He said the demand meant ­expansion would happen sooner rather than later.

“The commission is committed to growing the women’s game at all levels and if clubs show their ­investment in participation and pathways, we will be able to consider expansion at a quicker rate,” Abdo said.

“But the good news is the demand is there.

“All clubs want to now compete in what has become a vibrant and engaging premiership.

“The biggest challenge we face is just making sure we have the depth of players able to play and compete at the level of the premiership. The speed and intensity of the game has gone up a few levels this year.

The average television audience for an NRLW match is 170,000. The Dragons have been a huge success story in NRLW season 2022.

Abdo said the size of the audience signalled the increasing popularity of the women’s game.

“That’s an incredibly strong audience and it excludes viewers that are streaming,” Abdo said.

“The popularity of the Telstra women’s premiership is there through the audience.

While the AFLW has 14 teams — and is expected to go to a full competition by the start of the 2022-23 season — the NRL administration had been routinely criticised for its slow growth of the NRLW.

However, Abdo said the “slowly slowly” approach had paid off and a solid base had been formed.

The strength of the women’s game is shown in the statistics. The stats show this season has produced a tight competition and high-quality games. Andrew Abdo said the entertainment factor of the NRLW has increased this season.

“We know offloads are a huge thing for fans. They love it. It’s unpredictable. It’s exciting. Offloads have gone up 26 per cent, so now we’re getting 14 offloads a game as opposed to 11.

“The total points scored in a match has gone up to 18 per cent, but this is really pleasing; the final margin is down 30 per cent. The average margin for the first three years was 14 points between the winner or loser. It’s now down to 10. Almost 50 per cent of our games are decided within six points.”

As the women’s game continues to expand, with the placement of future franchises, Abdo wants to ensure there is a strong connection between the community and the team — as well as acknowledging there is still a way to go for women as semi-professional footballers.

“A big issue for us is making sure that we have sufficient depth across all geographies so we can see local talent pathways and minimise on relocation of players,” he said.

“We want people playing where they live, where they come from and where they learn to play their footy as much as possible. 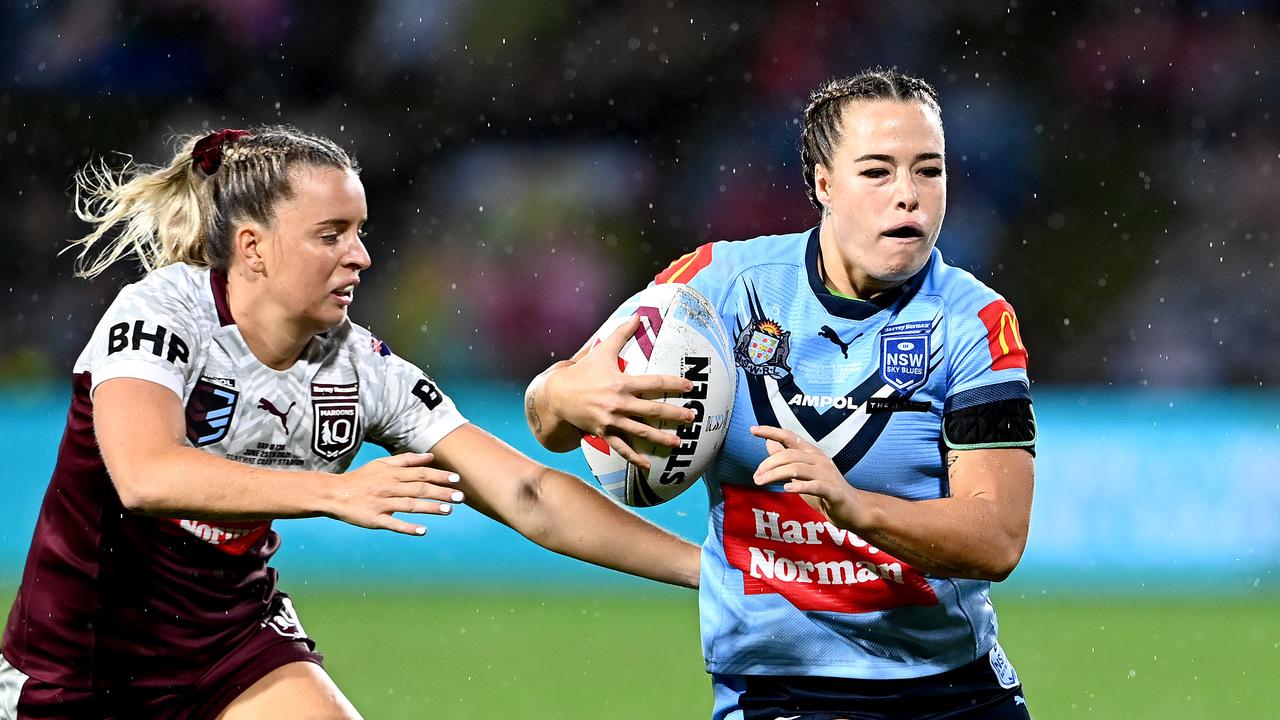 “So thinking about where licences are granted is strategic ­because it’s linked to junior participation at grassroots level, pathway competitions and areas where we can we develop talent over time that comes from that ­region.”

The NRL recently announced that women’s Origin payments are set to increase from $4000 to $6000 this year and the game’s elite female players are likely to earn about $60,000, while those on marquee deals will be paid more under a new initiative in which clubs will be able to employ female players and pay them outside the football cap.

Abdo said the growth of the women’s game was a major priority of the Australian Rugby League Commission and investment was key.

“We’ve got to do a better job of driving revenues because the more revenue we can bring to the ecosystem, the more we can pass that through to the players and the clubs to improve facilities and improve wages,” Abdo said.

“All revenue streams are opportunities for us to grow the system for the women’s game. That’s the first point. The second point is that the commission is so committed to this that we are investing well beyond what was the revenue equation.

“That investment we know is going to be good for our game. Long term, not just for the women’s game to be able to grow its revenues, but the whole rugby league community. So touch football, tag and tackle.

“Having a thriving elite women’s premiership helps you achieve growth in all of those areas and helps you become a better sport and a better business.”