State of Origin Game 2: Why Brad Fittler must convince Keaon Koloamatangi to play for NSW Blues over Tonga

With Haumole Olakau’atu set to reject NSW, there is one other star backrower that Queenslanders’ don't want to see playing for the Blues.

As a Queenslander, there is one player South Sydney’s Jai Arrow wants to see in a Tongan jersey rather than a NSW one in two weeks time and that is teammate Keaon Koloamatangi.

“I’m hoping as a teammate he gets the call-up to the Blues but as a Queenslander I don’t wish him any luck at all,” Arrow told The Daily Telegraph.

“I might be a bit biased because he is my teammate but I think he has been ready for Origin since last year.”

Koloamatangi, who is eligible for Tonga and NSW, is in the frame for selection in Blues squad for game two.

But the 24-year old is facing a similar decision to the one Manly forward Haumole Olakau’atu made on Sunday.

Olakau’atu potentially turned his back on $30,000 in Origin match payments to play for his beloved Tonga in a Test match against New Zealand on Saturday week, one day before the Perth Origin game. With Haumole Olakau’atu set to reject NSW, the Blues could look to bring in Keaon Koloamatangi. Picture: NRL photos

Arrow respects any decision his teammate makes about his immediate representative future, but believes Koloamatangi, who was part of Brad Fittler’s squad in last year’s series, is tailor made for the cauldron of State of Origin.

Arrow also believes the powerful second rower could be the key to blunting Cameron Munster’s impact after the playmaker dominated for the Maroons in game one.

“He doesn’t mind running over a halfback,” the former Maroons forward said.

“I’m hoping as a teammate he gets the call-up but as a Queenslander I don’t wish him any luck at all.”

While coach Fittler has been coy about any team changes for game two, which the Blues must win to level the series, a number of players are in a battle to keep their spots in the side including forwards Tariq Sims and Ryan Matterson. Haumole Olakau’atu reportedly wants to play for Tonga in the Pacific Test.

In the backs, Daniel Tupou has opted to make himself available for Blues selection ahead of playing in the Pacific Test for Tonga but will play in the red of the island nation in the Rugby League World Cup.

Brisbane centre Kotoni Staggs could also struggle to keep his place in Fittler’s outfit but the coach has a ready made replacement in Stephen Crichton, who played from the bench in game one.

Arrow believes Rabbitohs centre Campbell Graham should be in the frame in Staggs is not picked.

“He has been our most consistent and best player throughout the season. I have even said to him on the field against the Tigers ‘get my man an Origin jersey now’. He was so good for us in that game, I thought he’d get picked.” Arrow said.

“He suits that Origin quality of footy, that tough, fast style. He likes to carry those carries that no one likes taking coming out from your own end. He always seems to dent the line.”

Graham told The Daily Telegraph he is ready for the call-up.

“I haven’t had any chats with Freddy. But if my opportunity comes, I’ll be grabbing it with both hands. Absolutely, I’m ready to go,” Graham said.

Manly Sea Eagles forward Haumole Olakau’atu, seen by many as a NSW State of Origin saviour, is to turn his back on a Blues jersey.

And there were further concerns that incumbent Blues winger Daniel Tupou was also considering playing for Tonga in the mid-year Test against New Zealand ahead of NSW on the same weekend as Origin II.

NSW coach Brad Fittler was aware of Tupou’s doubts and admitted he “assumed originally he might want to play for Tonga.”

But after reading The Daily Telegraph’s report that Tupou was considering playing in the mid-year Test rather than Origin II, he rang the 30-year-old.

“He is making himself available for NSW but wants to play for Tonga in the World Cup,” Fittler said of Tupou. 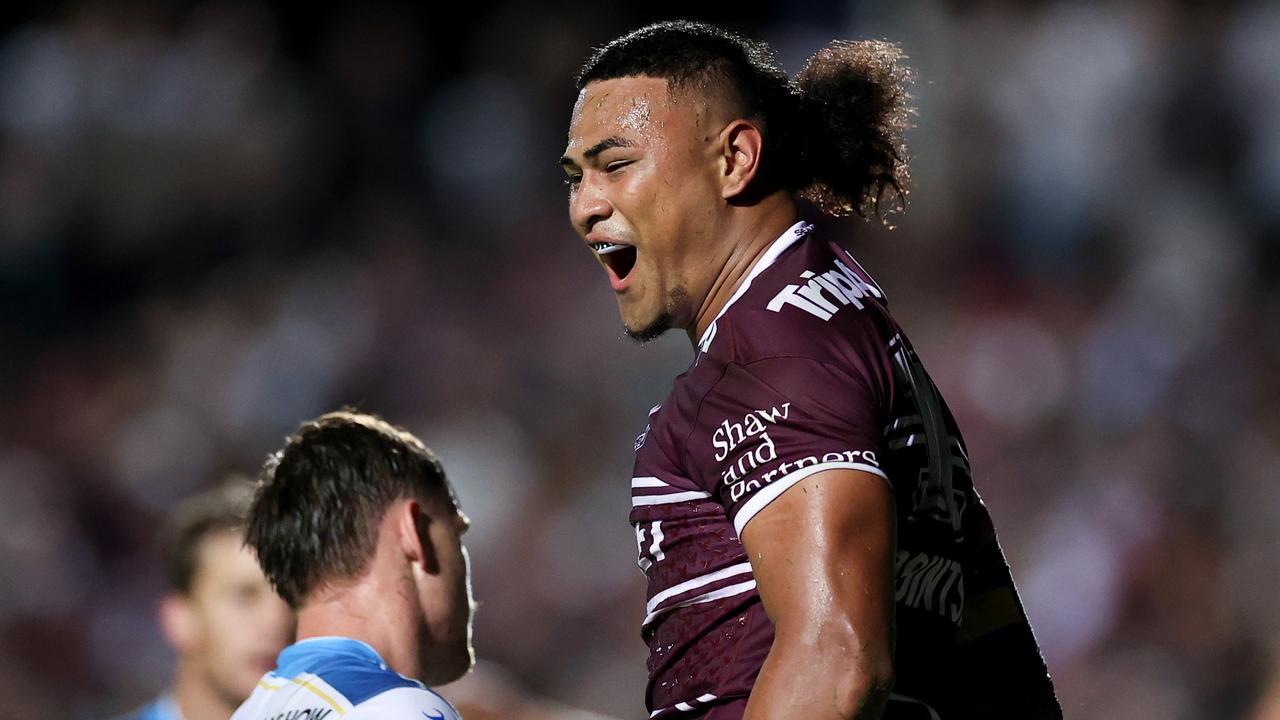 Olakau’atu is a fascinating story.

He scored a try and had 16 runs for 162m, an unbelievable 10 tackle busts, three linebreaks and 21 tackles in a devastating performance in Manly’s 30-4 win over Wests Tigers on Sunday afternoon.

Hasler will let Olakau’atu decide his representative future but indicated he would push the 23-year-old towards the Origin arena if asked his opinion.

“As far as his heritage, Tonga is always going to be there,” Hasler said.

“But Origin is a rare game. It’s a piece of history in any player’s aspiration in footy.

“He’ll get good counsel in making that decision (between Tonga and NSW).”

He was a member of last year’s emerging Blues squad but wants to play for Tonga against New Zealand on Saturday week, the day before the Perth Origin game.

He is turning his back on a potential $30,000 from Origin match payments for love of his heritage.

There has also been a question mark about his commitment to the NSW jersey.

After Queensland’s Origin win last week, the strapping forward posted on social media: “Been a Maroons since day dot.”

We then asked Manly’s media manager Wayne Cousins to check it out. Cousins came back to us and said: “Haumole said he’s committed to Tonga and he’s followed Queensland all his life.”

He is unusual in that he was born in Guilford of Tongan heritage and is a Parramatta Eels junior.

The 23-year-old debuted at Manly in 2019 and played his 40th NRL match against the Wests Tigers at Campbelltown on Sunday.

It was when he was mentioned on NRL360 last week as a possible contender to boost the Blues side for Origin II in Perth, Olakau’atu did post: “Been a Maroons since day dot.”

His manager Mario Tartak says the Queensland line on social media was simply a joke with his brothers.

“Long term he wants to play for NSW,” Tartak said.

“He loves State of Origin but he’s passionate about his Tongan heritage and is keen to play in this Test match against the Kiwis.”

“I didn’t know anything about that,” he said, “I enjoy watching him play.

“He’s doing a great job for Manly and he’s got plenty of potential.” Tupou had already indicated he wanted to represent Tonga instead of Australia at the end of year world cup but could become the first high profile player this series to elect to play for a Pacific nation instead of playing for NSW.

Tupou was a guaranteed starter for the Blues after performing strongly in the Origin opener having beaten out Josh Addo-Carr for a wing spot.

The decision could follow a similar path to that of Andrew Fifita, who, at the peak of his powers, stood down from Origin to represent Tonga in 2018. Tongan officials will reach out to Tupou on Monday before they select their team on Tuesday.

There were also doubts surrounding Kotoni Staggs’ availability, although his place in the NSW team is in doubt. The Blues hierarchy may need to decide if they will throw Suaalii into a must-win game or recall the out-of-favour Addo-Carr.

He will be 18 years 329 days by the time Origin two kicks-off and will have just 15 NRL appearances to his name.

Suaalii went close to appearing in the Origin opener but was instead a member of the extended squad.

Originally published as State of Origin Game 2: Why Brad Fittler must convince Keaon Koloamatangi to play for NSW Blues over Tonga