A decision on whether Brad Fittler parachutes Latrell Mitchell into the Blues team should be about more than his reconditioned knee and hamstring, writes David Riccio.

In the pre-season, a Canterbury Bulldogs player almost collapsed while running in the week that he had returned to training from Covid.

His heart rate rose to a dangerous level of 190, triggering the Dogs medical staff to wrap him in bags of ice.

Back in April, a Knights player was approaching halftime in his first game back from a bout of Covid.

He screamed to the Newcastle trainers on the sideline that he could no longer run because his lungs were on fire.

Down at the Raiders, their high performance team have noticed a decline in the aerobic capacity and performance from their players who had been sidelined with the virus.

Rapid fatigue in players, similar to the feeling felt after the flu, has been noticeable among the clubs.

The comeback of Latrell Mitchell and whether NSW State of Origin coach Brad Fittler parachutes him into the Blues team will be as much about his reconditioned knee and hamstring, as it is his recovery from Covid. Mitchell hasn’t played in the NRL for two months.

The Rabbitohs star will resume training after a week of Covid isolation on Monday.

If cleared, Mitchell will have 80-minutes next Thursday against St George-Illawarra to prove that he’s willing and able to be picked for the Blues for Origin II in Perth.

Origin is regarded as the fiercest and fastest sporting arena on the planet.

There’s no denying Mitchell is a star in Blue.

But with the series on the line, it will be one of the biggest calls of Fittler’s career to pick the champion centre.

Tariq Sims and Ryan Matterson are battling to retain their NSW spots as the Blues hierarchy largely plan to stick solid despite an opening game loss.

NSW is confident there is not the need for wholesale changes after losing Origin I 16-10. But forwards Sims and Matterson are in the firing line while Kotoni Staggs and Stephen Crichton’s spots will come under scrutiny depending on the make-up of the Blues bench.

The likes of Tyson Frizell, Angus Crichton, Jake Trbojevic and Cronulla’s damaging utility Siosifa Talakai are in line to feature in game two. Tariq Sims is battling to keep his spot in the Blues side after the Game I loss. Picture: Getty Images.

Trbojevic especially so after Payne Haas’s AC injury to his “good” shoulder last night against the Raiders – it must put the Broncos prop in serious doubt for Perth.

Sims earnt his shot at starting the Origin series off the back of a success campaign last year but his starting spot is on the line. He did not play for the Dragons in their loss to North Queensland on Friday night and now has just one match against South Sydney on Thursday to argue his case to be retained.

Matterson was one of the game’s most in-form players heading into his Origin debut on Wednesday but struggled to make an impact. He is expected to line-up for the Eels against the Bulldogs on Monday.

Frizell was 19th man last Wednesday, while Crichton and Trbojevic were notable exclusions having played a part in last year’s winning series. Talakai looms as a potential X-Factor for the Blues to try and combat the impact of Queensland’s bench. 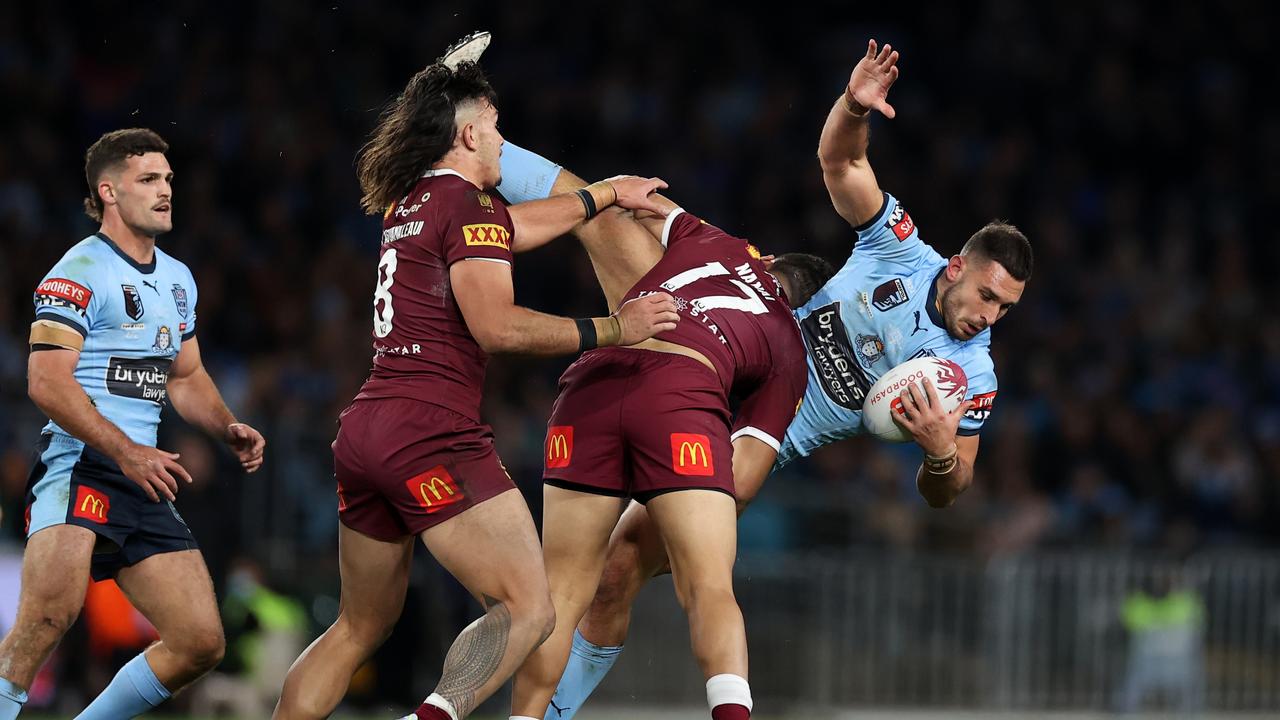 Ryan Matterson struggled to provide the same impact as he has for Parramatta so far in 2022. Picture: Getty Images.

If Ryan Papenhuyzen makes his return as planned this week, then he too will come under consideration for the no.14 role. The Blues selectors will also delay making a decision on Latrell Mitchell, as the damaging outside back prepares to re-join his Rabbitohs teammates after a bout of Covid-19 on Monday. He is likely to line-up for his first game since April 9 against the Dragons on Thursday night, and provided he comes through unscathed and his fitness levels are OK, he is in line for a recall.

Picking Papenhuyzen or Mitchell would force a major reshuffle for the Blues and put pressure on either Staggs or Crichton, and potentially both of them. Staggs is recovering from a shoulder injury and missed the Broncos clash against Canberra on Saturday night, while Crichton had limited minutes to show his value in the Origin arena after starting off the interchange bench. Reece Robson is also building pressure on hooker Damien Cook. Ryan Papenhuyzen could be back on the Blues radar if he makes his NRL return for Melbourne as planned. Picture: Getty Images.

Talakai has put his hand up to play his first Origin match.

“I‘d like to think I can force my way in there (NSW team) but Freddy (Fittler) will make the call,” Talakai said. “I’ll just play my footy. I’m more focused on doing my best for the Sharks.’’

The Blues will pick their team next Sunday ahead of Origin II in Perth on June 26.

Only injuries will force changes to the Maroons. Winger Xavier Coates will be ruled out of Origin game two leaving North Queensland Cowboys backs Murray Taulagi and Hamiso Tabuai-Fidow plus Brisbane winger Corey Oates to battle for one spot.