In the same week his breakout beer label, Drink West, became an official partner of the UFC, Tuivasa confirmed himself ready for a European showdown with French star Ciryl Gane in September.

While the 29-year-old stressed nothing has yet been confirmed, he welcomed the opportunity to headline what would be the first ever UFC event on French soil.

A French headliner would continue a huge 18 months for Tuivasa, who is not only on a run of five straight wins inside the Octagon — all of them via knockout — but also finalised a new multimillion-dollar business deal with superstar Penrith No. 7 Nathan Cleary and fellow UFC fighter Tyson Pedro.

On Thursday, the trio revealed Drink West was now an official partner of the UFC — a relationship which, apart from taking the beer global, will also see every one of the group’s unmistakeable yellow cartons branded with the famed fight company logo. Asked about headlining a first ever France show, Tuivasa cackled: “You know me, I’m made for the big show.

“So a fight in France would be awesome.

“If it goes ahead, this would be the first show in Paris and something else that I can add to my resume.

“(Laughs) Resumes, never had a real one.

“But now I’m getting to do what I love in front of the world.

Earlier this week, ESPN confirmed the UFC were finalising a heavyweight bout between Tuivasa and Gane, the former UFC interim champ, for September 3.

The report suggested both sides had agreed to the matchup, which will most likely take place in Paris.

Gane, who was born in France and trains out of the famed MMA Factory, has lost only once in eight UFC appearances – a heavyweight title showdown against champ Francis Ngannou in January. Despite the unanimous decision result, he remains the division’s No. 1 contender and will almost certainly start favourite against the Aussie dubbed Bam Bam.

“But me? People look at me and see a fat partier.

“We’re the westies, the underdogs. So this is nothing new.”

While Tuivasa may now be eyeing off a Paris card, there are two title fights taking place this Sunday at UFC 274 in Phoenix, Arizona — including Brazilian lightweight champ Charles Oliveira defending against American Justin Gaethje.

Wonderfully, these are the type of fights to which Tuivasa’s beer label will now be attached. 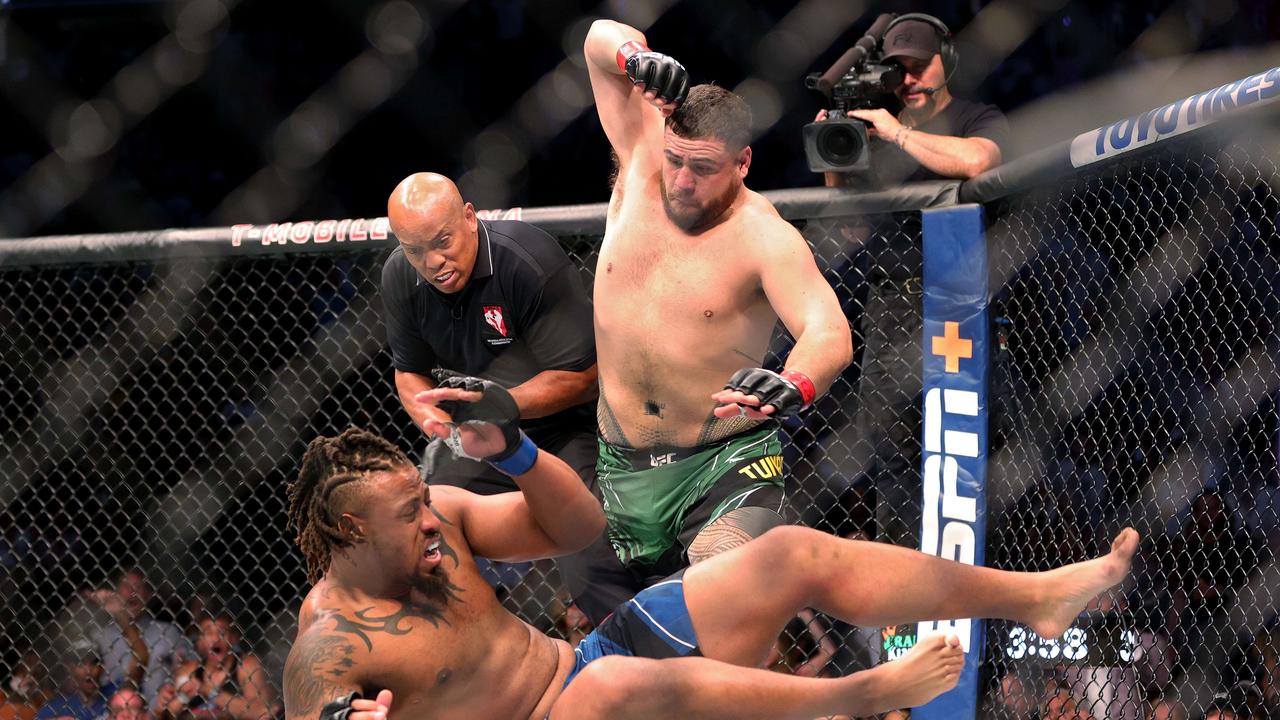 Apart from knocking UFC heavyweights cold — most recently, American cult favourite Derrick Lewis — the man with Australia’s heaviest hands has also been putting the finishing touches on a Drink West explosion that includes not only Cleary coming on board, or a new $1.5 million brewery in Penrith, but also a commercial with Australian music favourite Shannon Noll, which has quickly gone viral.

At last look, the video of Noll singing with the three Drink West owners had been viewed over four million times.

Quizzed on the success of his new company, the fighter famed for drinking shoeys after each win laughed: “I knew how to drink it but not make it.

“Like most things in life, Drink West started with a thought. Tai Tuivasa on his way to icing Harry Hunsucker in March. (Photo by Chris Unger/Zuffa LLC via Getty Images)

“But the big thing is executing and following through. So while it’s always been easy to write us off out here, you have a crack, then stick at it …”

While Tuivasa would be the main eventer on UFC France, Australia’s first UFC champion is also now gunning to be on the card, with Whittaker revealing this week he will have recovered from the injury issues which forced him out of next month’s UFC 275 bout with Italian Marvin Vettori.

The Sydneysider hopes he and Vettori can now reschedule the fight for the France event.