After Serena exits Wimbledon, it may be the final days of the greatest tennis era

The 21st century has arguably seen the three best male and the best female players ever carry the sport on their shoulders. But that era may be reaching its final moments writes MARTIN ROGERS. The golden era of Serena Williams and her male counterparts Federer, Nadal and Djokovic may be fast cosing. Picture: Clive Brunskill/Getty Images

There was a moment, late in the London evening, when Serena Williams celebrated with as much gusto as she’s sometimes shown to mark a Grand Slam championship triumph.

The tennis icon, now 40, a mother, a businesswoman, and – oh yes – a 23-time Major winner, threw her hands to the skies and screamed with delight, emotion welling on her face.

It was 5-4 in the third set, and Williams had just broken the serve of France’s Harmony Tan, to set up the opportunity to serve things out. She thought victory was coming, hence the outpouring of ferocity — and relief. 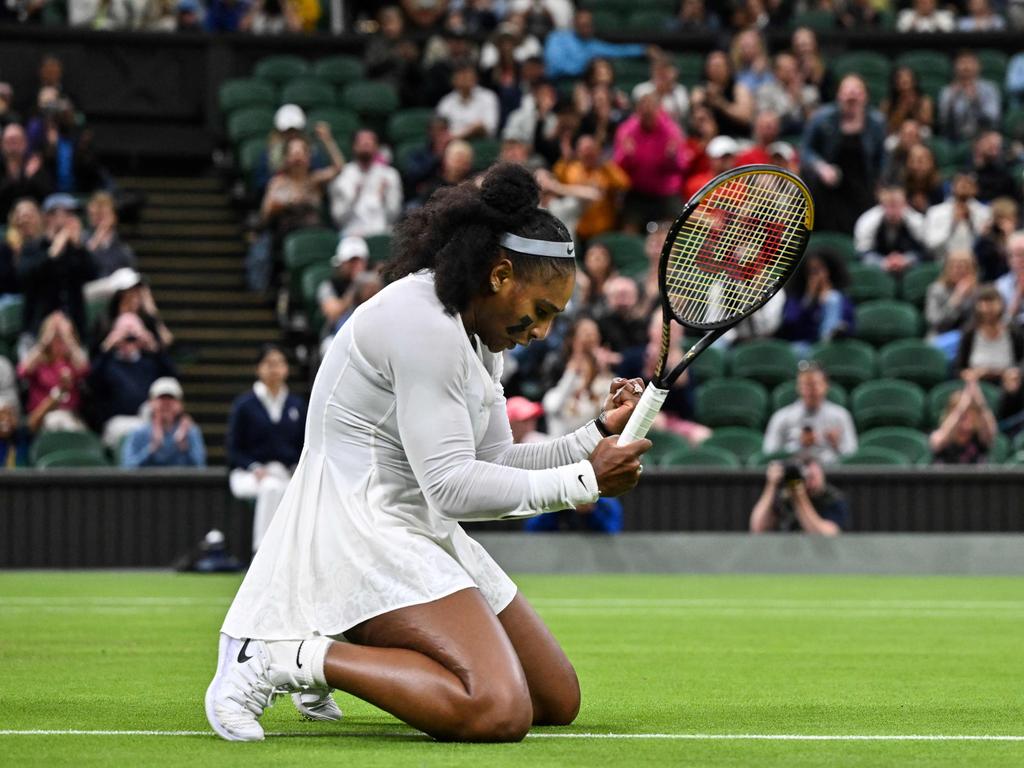 Ultimately, victory didn’t arrive, Tan rebounding to win the pair’s Wimbledon first-round match 7-5, 1-6, 7-6 (10-7). But this wasn’t a defeat in the normal sense, and it sure as heck wasn’t a failure.

It might have been a goodbye. At the very least it was the precursor to one that’s coming. Williams was noncommittal in her post-match press conference, but there isn‘t a lot left in the tank and absolutely zero left to prove.

A glorious career is winding toward its end, if not now, then likely very soon. It’s not the only one. Sporting marvels often find the closing steps of their competitive life to be among the loneliest.

In this case, Williams is in good company.

Tennis fans have been spoiled, so spoiled, for more than two decades. In that time, greatness has been so ever-present that a couple of generations of the sport’s followers have forgotten what it was like when all-time excellence was something rare enough to be delicately cherished. The 21st century has arguably seen the three best male and the best female player ever to strike a ball carry the sport on their shoulders. Williams won the US Open all the way back in 1999 and has been relentless in her charge toward immortality, while the men’s side of the game has witnessed a trio of legends duking it out simultaneously.

Roger Federer, Rafael Nadal and Novak Djokovic have waged battle on courts around the world, allowing little room for anyone else to breathe the rarefied air at the top of men’s tennis, let alone win with any regularity.

Nadal currently sits on 22 Grand Slams, Federer and Djokovic on 20 each. To think that Pete Sampras‘ previous mark of 14 once looked unassailable.

Yes, your quick math was correct, the three have won 62 Grand Slams between them. There have been separate streaks of 18, 14 and 11 consecutive Slams when no one else got a look in.

Just when it looked like a new generation was coming, Djokovic surged to the first three Slams of 2021 and Nadal has claimed the first two this year. 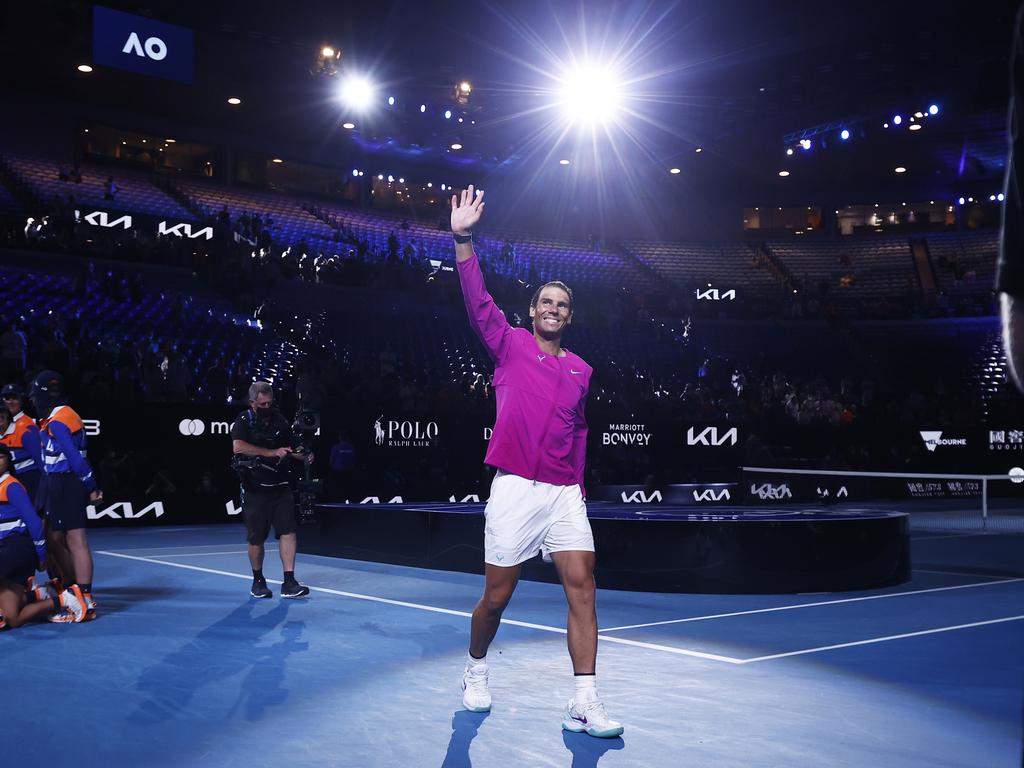 Rafael Nadal of Spain acknowledges the crowd as he celebrates his Australian open victory this year. Picture: Daniel Pockett/Getty Images

But the end may be ushered in swiftly. Tennis has gotten used to greatness and dominance, but it will soon need to get un-used to it. Federer, 40, was last seen in action a year ago. He’s still working feverishly to get back into shape from knee trouble. Rumours are spreading, however, that October’s ATP Tour stop in Basel, Switzerland — the region where he grew up — will be the scene of an emotional swan song.

There is similar talk about Nadal, despite his success this year, which included winning the French Open a mind-blowing 14th time. It took injections and ceaseless therapy to get him through at Roland Garros this year, and he has admitted in interviews that the rigours of simply getting onto the court are wearing on him.

Djokovic is the youngest of the three at 34, which used to be a ripe old number for a tennis player. Yet no longer does the Serbian seem feverishly intent on ending up with the Slams record, and his refusal to get vaccinated for Covid kept him out of the Australian Open in January and will do the same for August’s US Open. He could stick around to try to fend off the young challengers alone, if Nadal and Federer head out the door. But most expect him not to. 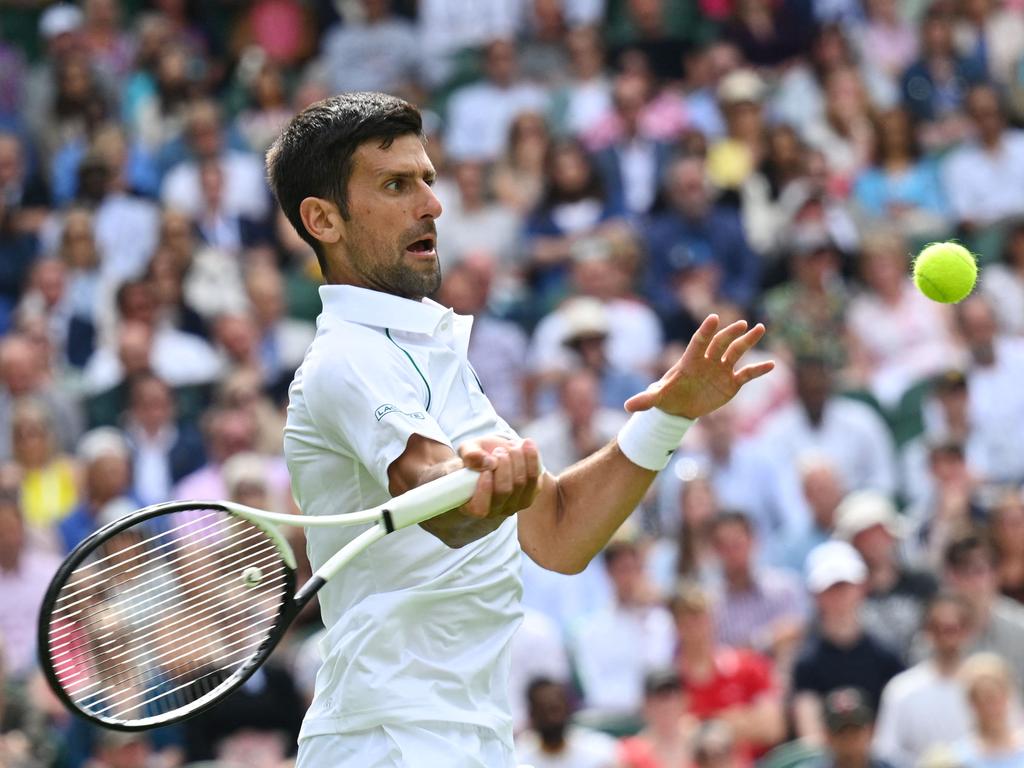 Novak Djokovic will likely be the last of the ‘big four’ standing. Picture: SEBASTIEN BOZON / AFP

And then there is Williams. On Monday, she showed why she, and the men’s trio, are a different breed. Because this was one that needn’t have mattered. She could have mailed this one in. Heck, she didn’t have to be at SW19 in the first place, after a year out following an injury on the same Centre Court in 2021.

It was the first round of a major, against an opponent ranked No. 115 in the world, and there was Williams, fighting as if her life depended on it. She could have been forgiven for easing off a little. She was rusty as hell and frankly being outplayed by a player 16 years younger and desperate for an opportunity. Williams was getting drop-shotted and flung around the court. Still, she found the reserves of spirit and fortitude to find a winning position, before being unable to finish it off.

To be a champion on that kind of scale is about more than just winning all the time. This time it was about leaving it all out there, physically and mentally, despite being clearly restricted and struggling to get her footing. That’s what the greats do. That’s what happens when the hatred of losing is so strong, and so laced within their DNA, that they know no other way. That’s how, when it is combined with outrageous talent and tireless work ethic, an athlete comes along who defies all prior logic.

Or, somehow, for the past two decades — four of them. 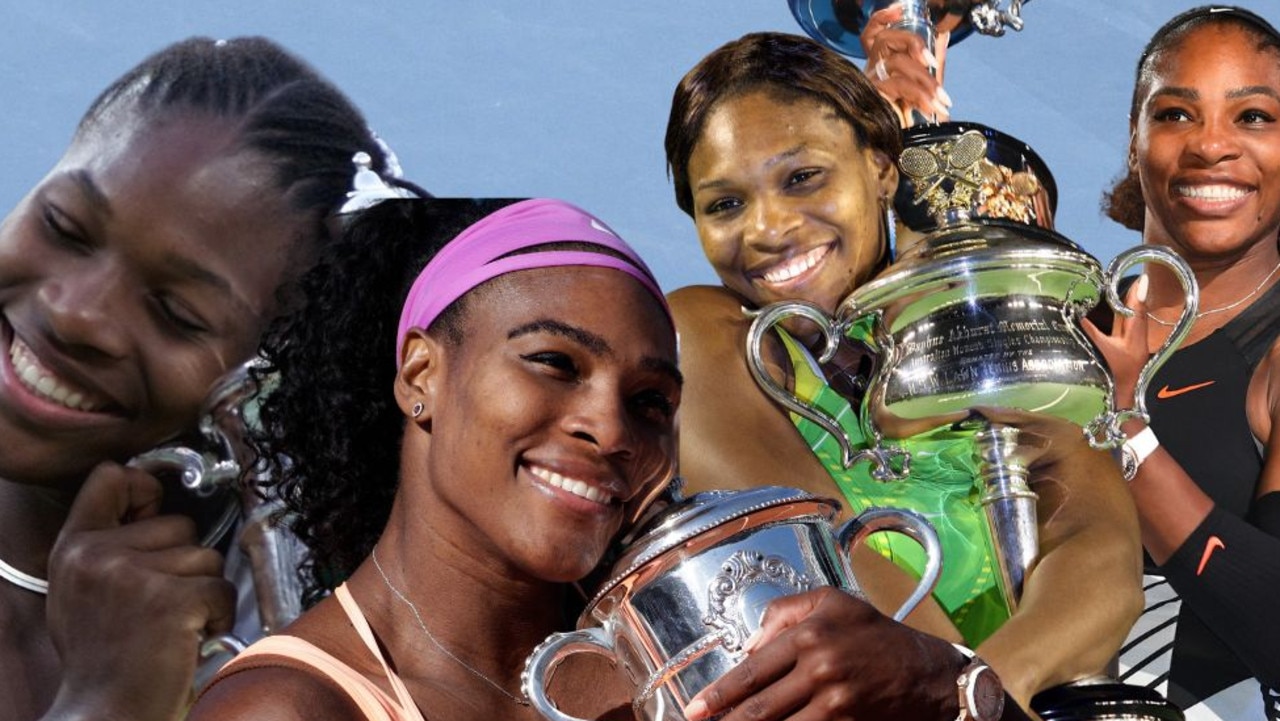