Australian Open 2022: All the results and action from the men’s draw

Andy Murray clinched a huge five-set triumph, but fans were upset by apparent booing in the crowd. However, it may have been something else entirely.

Ageing superstar Andy Murray has done it the hard way against Georgian Nikolaz Basilashvili, advancing to the second round in a five set epic.

Basilashvili came back from 1-4 down in the final set to bring it to 4-4, but Murray was able to snatch the break, despite a gallant effort from Basilashvili, who saved two match points on his serve in the final game. However, tennis fans fumed about apparent booing in the crowd during Murray’s post-match on-court interview.

Although, as one observer pointed out on social media, it may have been a misplaced ‘SIUU’, attributed to the goal celebration of current Manchester United champion Cristiano Ronaldo. Are the annoying fans shouting 'Boo' or a misplaced CR7 'Suuu' at Murray? #AusOpen

Are the annoying fans shouting 'Boo' or a misplaced CR7 'Suuu' at Murray? #AusOpen

@andy_murray well done Andy. Ignore the attrocious behaviour by some people in the crowd as you were interviewed.

Fantastic match and what a fighter Andy is. This is why he's a legend of the game and a multiple grand slam winner. He played brilliantly today.ðŸ˜ðŸ‘ But no idea why people in the crowd were booing him during his interview, I hope those people are kicked out. SO rude. ðŸ˜¤ #AusOpen

Fantastic match and what a fighter Andy is. This is why he's a legend of the game and a multiple grand slam winner. He played brilliantly today.ðŸ˜ðŸ‘ But no idea why people in the crowd were booing him during his interview, I hope those people are kicked out. SO rude. ðŸ˜¤ #AusOpen

Murray, 34, said he had worked hard to get back after questioning whether his career was over three years ago.

“Put in a lot of work to get back here. I played on this court many times. The atmosphere is incredible. I have always had fantastic support.

“This is the one where I thought potentially I had played my last match three years ago, but it is amazing to be back winning a five- set battle like that. Couldn’t ask for any more.”

Murray said he was “so happy” to back playing front of crowds after Covid forced fans out of grand slams.

“Obviously when we came back last year to play after the enforced break with COVID, we played with no fans in the stadium. It was tough. It is not loads of fun,” he said.

“You know, we train and practice to allow us

to play and compete in atmospheres like this on courts like this to enter -- entertain you guys and perform in front of you. It’s an incredible atmosphere and I am so happy.”

Back on Rod Laver Arena for the first time since last year’s Australian Open final defeat to Novak Djokovic, Daniil Medvedev fired his opening warning shot to rivals at this year’s tournament.

The Russian world No.2 scorched his way to a 6-1 6-4 7-6 (7-3) win over Swiss veteran Henri Laaksonen, who grew into the match after a horror first set, to start his campaign off on the right foot.

He wasn’t at his absolute gun-slinging best, but still set centre court alight with a blistering 23-minute first set – rattling off six straight games after being broken in the opening game.

From there, Laaksonen found his range and his serve and no longer was it the cakewalk that most would have foreshadowed after the brutal opening half hour – but Medvedev was clinical in finding his path to victory. Daniil Medvedev sent a warning to the tournament in his first-round win. Picture: AFP

Which takes him on the path to avenging last year’s defeat to Djokovic, even if his fierce rival jumped on a jet plan out of Australia on Sunday.

Reminders of Djokovic are dotted around Melbourne Park in the form of promotional posters – a constant reminder of what the tournament is missing, but for Medvedev they should serve only as a daily reminder of what a tremendous opportunity he has to nail a second grand slam title to add to his US Open title from last year.

“It’s a really important tournament for me, I like playing here, I like hardcourt. I’d like to do better than last year but it’s not easy.”

In front of a sparse crowd at Rod Laver Arena, that couldn’t have hit 15 per cent of its capacity when the match commenced in the early afternoon on Tuesday, Medvedev showed enough to suggest that he is a worthy favourite.

At times, he produced a frightening display of cleanly hit ground strokes and the sort of tenacious defence that lifted him to last year’s Australian Open final.

But there’s more to come – with the winner of unpredictable Australian star Nick Kyrgios and Briton Liam Broady waiting for him in the second round.

Some players thank their coaches after a win. Others give a shout out to their sponsors.

But Matteo Berrettini? He was all about Imodium — the over-the-counter medicine to help stop the runs.

After securing a second round berth, the Italian 7th seed wrote: “Imodium, Grazie!” on the camera as he left the court.

We can only imagine what he has been going through the past few days. Italy’s Matteo Berrettini thanks the medicine he used to settle a very upset stomach before his first-round victory.

Actually, we don’t even want to try.

“I’ve been feeling sick with my stomach, let’s say that,” Berrettini said.

“It was really hard to play, especially the third and fourth set.

“(I was) playing a great match against Brandon... I told myself to fight, to do my best and in the end I won. I’m really happy.

“I was feeling that the match was changing a little bit there so I really held on with my mental strength mostly because my body wasn’t there.”

For everyone’s sake, we are hoping Berrettini has better luck with his stomach from here on out. 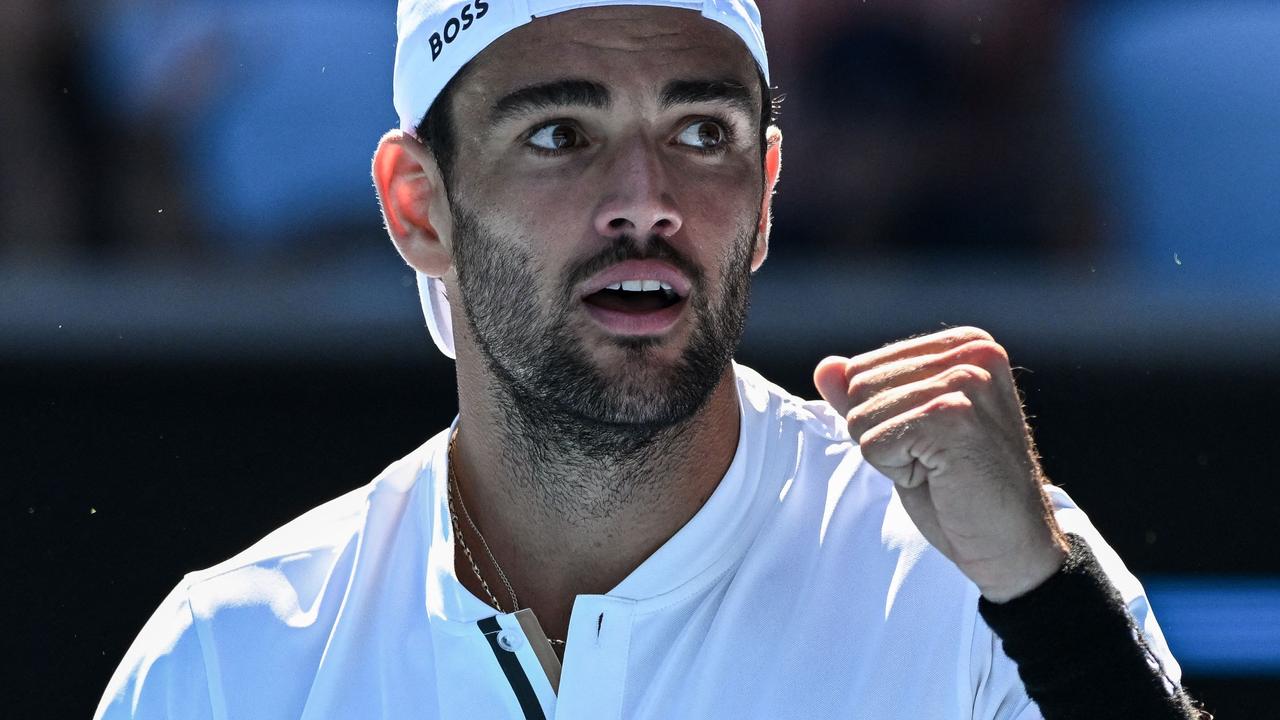 Twenty-four years after his father Petr hoisted the Australian Open trophy, Sebastian Korda has pulled off a huge upset in his first-ever match at the tournament, ousting British World No. 12 Cameron Norrie in straight sets.

Continuing the Korda family’s love affair with Australia, the 21-year-old American, who is world No. 43, had his foot on Norrie’s throat from the outset, taking out the match’s first three games and never letting up in a 6-3 6-0 6-4 win.

As well as his father’s 1998 victory at Melbourne Park, Korda’s superstar golfing sisters, world number one Nelly and Jessica, have both won the women’s Australian Open in their sport.

Korda’s win was all the more remarkable given he tested positive for Covid-19 after arriving in Australia earlier this month.

Now that he’s back fit and firing, the 21-year-old is tipped to continue creating headaches for his rivals in Melbourne and beyond. “I think there’s a top 10 player in the waiting with Korda,” said retired doubles specialist Colin Fleming in commentary for Stan Sport.

“He’s certainly one to keep an eye on at this year’s Australian Open.”

After losing the first set, things didn’t get any easier for Norrie, who failed to take a single game away from Korda in what ended as an embarrassing second set for the Brit.

Despite his imposing height, the 6ft5 American moved around the court with ease, bamboozling his highly fancied opponent, who is coming off a stellar 2021.

While Norrie attempted a late fightback, it appeared from the second set he was destined to finish as another casualty of a dismal week for British sportspeople on Aussie shores.

Petr Korda took out the 1998 tournament in what was the only grand slam victory of his career, and 20 years later, Sebastian won the junior title at the 2018 Australian Open.

Sebastian’s sisters, Jessica and Nelly, are LGPA professionals and have each taken out top honours at the golf Australian Open, in 2012 and 2019, respectively.

Nelly, the younger of the two, had a career-best year in 2021, headlined by winning both Olympic gold and the women’s PGA championship and she is currently the top-ranked women’s golfer in the world.

Originally published as Australian Open 2022: All the results and action from the men’s draw