Nick Kyrgios would have beaten most players on tour, but Mt Medvedev was a step too far for the Aussie, who wasn’t in the mood for what the World No.2 had on the menu.

Embrace me, or die.

That’s the message Nick Kyrgios has for stuffy tennis officials and fans, following his dramatic second-round exit from the Australian Open at the hands of Daniil Medvedev.

Kyrgios gave it everything – and then a little bit more – against the World No.2 but his dreams were ended by Deadly Daniil: the man who could become the next King of Melbourne Park.

Despite the tough result, Kyrgios was in a typically amusing mood post-match, jokingly replying “I don’t know, man … f***ing Daniil’s serve, straight down my throat” when a reporter asked him what he was having for dinner. 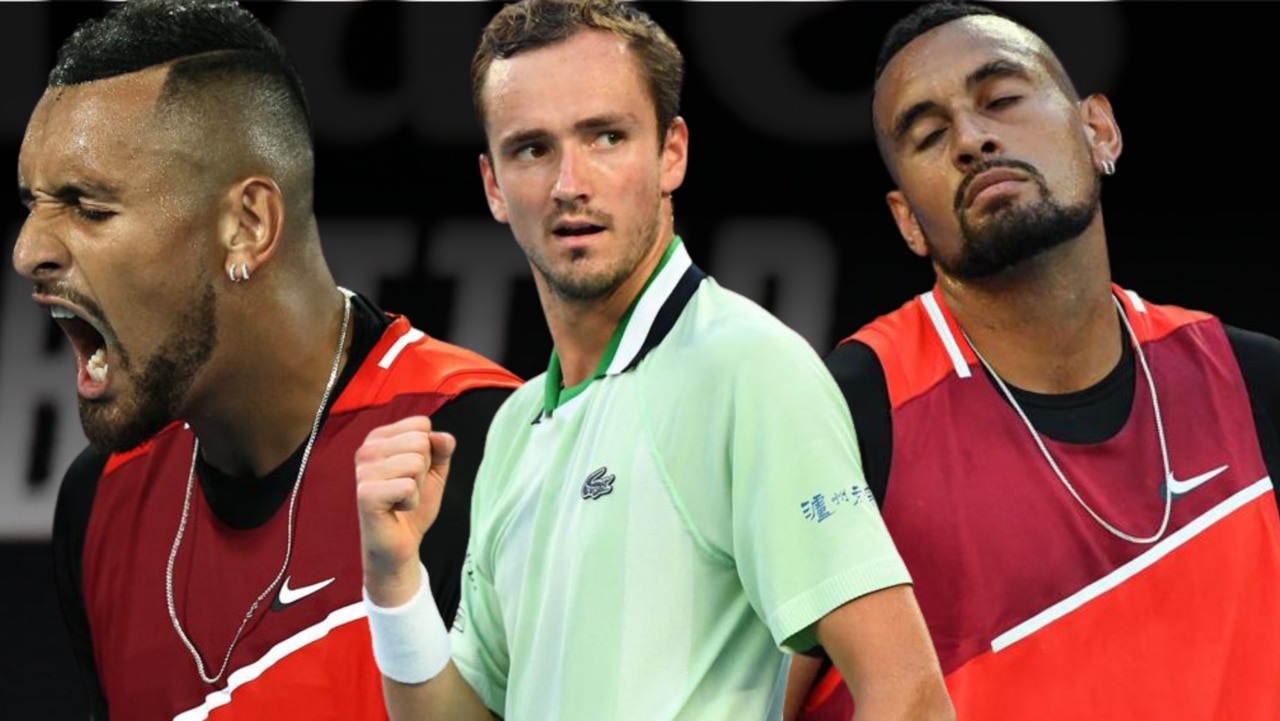 Try as he might, Nick Kyrgios could not match it with Daniil Medvedev.

Medvedev managed on Thursday night to do two of the toughest things in tennis: nullify Kyrgios’ serve, and silence the Australian’s ravenous home crowd.

And while Medvedev mouthed off at the fans on Rod Laver Arena, following a rowdy performance where he was booed between serves, Kyrgios had a different take on what tennis really needs in its future.

“It was obviously a lot rowdier than it usually is on Rod Laver (but) I thought the atmosphere was awesome, that’s what sport is,” he said.

“You’ve got one of the most entertaining players playing in his home slam on Rod Laver.

“You’d expect the crowd to be like that. I can understand it’s a gentleman’s game, but it’s about time that people embraced some sort of different energy in this sport otherwise it will die out. It’s just that simple.” 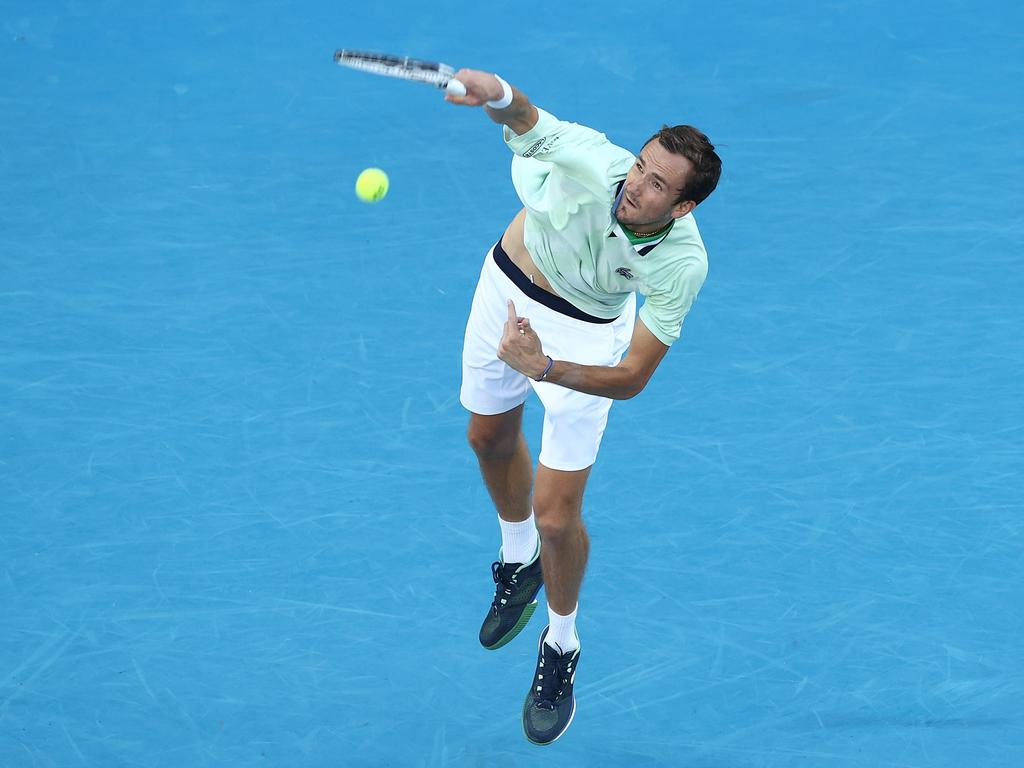 Kyrgios harnessed that energy in a stirring third-set comeback, playing a level of tennis that would’ve accounted for almost everyone on tour – but climbing Mount Medvedev was a step too far, just days after recovering from Covid-19.

“If I play 95 per cent of people tonight on that court I think I win, to be honest with you,” Kyrgios said.

He threw “everything but the kitchen sink” during the bruising three-hour match, in which he went from the brink of a meltdown to the verge of an almighty boilover, but Kyrgios walked away without a spot in the third round but with his on-court reputation well and truly restored.

“Incredibly proud of my performance today. I’m going to hold my head high,” he said

“I gave it everything, I put on a good performance. I think he’s going to be favoured to win the Australian Open. I can’t be too upset.” Nick fails to rock the world in battle of fiery giants

He gave it everything – and then a little bit more – but the man who could become the next King of Melbourne Park has buried Nick Kyrgios’ Australian Open dreams.

Kyrgios’ went from the brink of a meltdown to the verge of an almighty boilover in a rollercoaster third set where he threatened to rock world No.2 Daniil Medvedev.

But mixed in with Kyrgios’ ridiculous netplay, no-look backhands and fighting spirit, his sparring battles with chair umpire Carlos Bernardes and one smashed racquet, was the relentless, steely play of the undisputed favourite to claim this year’s men’s title. “I am throwing the kitchen sink. I actually can’t physically do anything more,” Kyrgios exclaimed as he held on for dear life early in the decisive fourth set.

Medvedev managed on Thursday night to do two of the toughest things in tennis: nullify Kyrgios’ serve, and silence the Australian’s ravenous home crowd.

In doing so the world No.2 somehow managed to halt a stirring Kyrgios’ comeback in four sets and book a third round spot and rob the Australian Open of its greatest entertainer.

Due to Covid restrictions Rod Laver Arena was restricted to half-capacity, but the crowd was ready to again eat out of Kyrgios’ palm – it was just that Medvedev slapped that hand away.

Kyrgios was called for a time violation and a code violation for smashing his racquet – having already clashed with chair umpire Carlos Bernardes during the first set over the speed of the serve countdown.

On another night, it might’ve sent Kyrgios into a spiral. Instead, it lit a fire under him.

“All I did was walk to my towel. That’s all I did. I’m not trying to slow him down,” Kyrgios complained.

In truth, it seemed there was nothing that could slow Medvedev down until Kyrgios produced an electric third set that would’ve lifted the roof off Rod Laver Arena had it been closed.

Kyrgios’ serve – so dominant in his first-round match-up against Liam Broady – was once again his greatest asset.

But the problem was that even 225km/h hammers were coming back at him, thanks to the best returner in the business outside of Novak Djokovic. Kyrgios tried his best — and produced some stunning tennis in the process, but it wasn’t enough. Picture: Getty Images

Medvedev more than held his own on that front as well, thumping 31 aces to Kyrgios’ 17 in a battle of the fiery giants as he tightened the screws in the fourth set to silence Kyrgios and his fans.

Kyrgios switched up his tactics throughout the match, but no amount of underarm serves – nor conventional monstrous forehands, or even the drop-shot strategy he used to great effect – could unsettle the Russian tennis robot who just kept on coming.

Medvedev, who will face Dutch young gun Botic van de Zandschulp in the third round on Saturday, is now 15 sets from Australian Open glory. The crowd got into it on Rod Laver Arena. Picture: Getty Images