Australia has a new homegrown tennis hero after Chris O’Connell conjured one of the biggest upsets of the Australian Open’s first week. 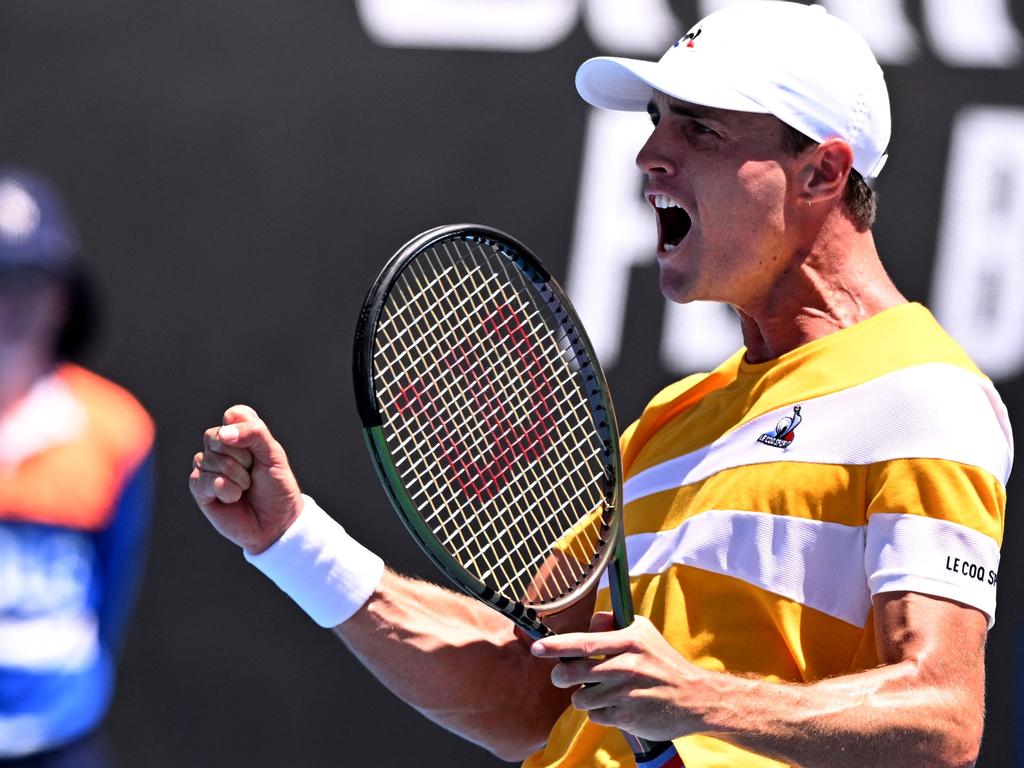 Australia’s Chris O’Connell has produced one of the upsets of the Australian Open to book his place in the third round. Picture: Michael Errey/AFP

Chris O’Connell must be sick of people referencing him cleaning boats to pay the bills a few years back – but he’ll gladly retell it now.

Just don’t expect him back there anytime soon.

The boy from Sydney’s northern beaches is marching into the third round at the Australian Open and $221,000 richer after dispatching world No.13 Diego Schwartzman 7-6(8-6) 6-4 6-4.

Schwartzman’s scalp is the best of O’Connell’s career to date, topping his victories over then-23rd-ranked Jannik Sinner in July and top-40 German Jan-Lennard Struff at last year’s Open.

The Australian wildcard, 27, has been riddled with injuries since he was a teenager, then had his momentum stalled by the Covid-19 pandemic as he was on the verge of the top 100.

But O’Connell – despite admitting a couple of years ago to panicking about his career flying by without a breakthrough – has never given up. This week’s breakthrough owes to his extraordinary resilience, with ankle and groin injuries last year just the latest hurdles before he was also diagnosed with Covid diagnosis last year.

In between those setbacks, O’Connell continued to show why good judges believe he will be Australia’s next top-100 player.

Schwartzman won’t take any convincing after what he witnessed first-hand on a boisterous court three on Thursday.

O’Connell expected the diminutive Argentine star to “make a million balls” after he booked the clash with a four-set first-round victory over Frenchman Hugo Gaston.

That’s exactly what he got in a titanic opening set with several swings and roundabouts that lasted one hour and 24 minutes after Schwartzman failed to serve it out in the 10th game. O’Connell’s laidback nature off the court is mirrored on it, where his admirable ability to absorb the repeated pressure situations he found himself in was a significant factor in the result.

Knowing Schwartzman’s staying power, the Sydneysider was determined from the outset to play aggressively and try and push his former top-10 opponent around.

More costly than anything else for Schwartzman was his double fault to concede a four-deuce game at 5-4 in the first set, after he blew three set points.

O’Connell survived two more break points in the next game, then fell behind 1-3 in the tiebreak but kept bouncing back every time, before flashing a brilliant forehand winner to go a set up. Chris O’Connell is $221,000 richer after his second round victory. Picture: Michael Errey/AFP

It’s unlikely he would have known about Schwartzman’s grand slam record but his confidence would have soared at that point if he did.

Schwartzman had won only seven of his previous 27 matches at this level after losing the opening set – and that statistic was even worse once O’Connell was finished with him.

The Aussie comparatively raced through the second set and was soon a break up in the third before a minor stumble.

Any potential opening for Schwartzman was soon closed as O’Connell broke him for a fourth time then completed the job on serve.