The Novak Djokovic controversy continues to dominate headlines just days out from the Australian Open. And a frustrated Rafael Nadal has shared his view.

Rafael Nadal is tired of the Novak Djokovic controversy that has dominated headlines in the lead-up to this year’s first Grand Slam and wants the spotlight back on tennis.

The former No.1 men’s player and 20-time Grand Slam winner made his thoughts clear about how the saga had impacted the tournament on Saturday.

“I honestly am a little bit tired of the situation because I just believe that it’s important to talk about our sport, about tennis,” he told reporters at Melbourne Park.

“It’s very clear that Novak Djokovic is one of the best players of the history. But there is no one player in history that’s more important than an event.

“If he’s playing finally, okay. If he’s not playing then it will be a great Australian Open with or without him.” 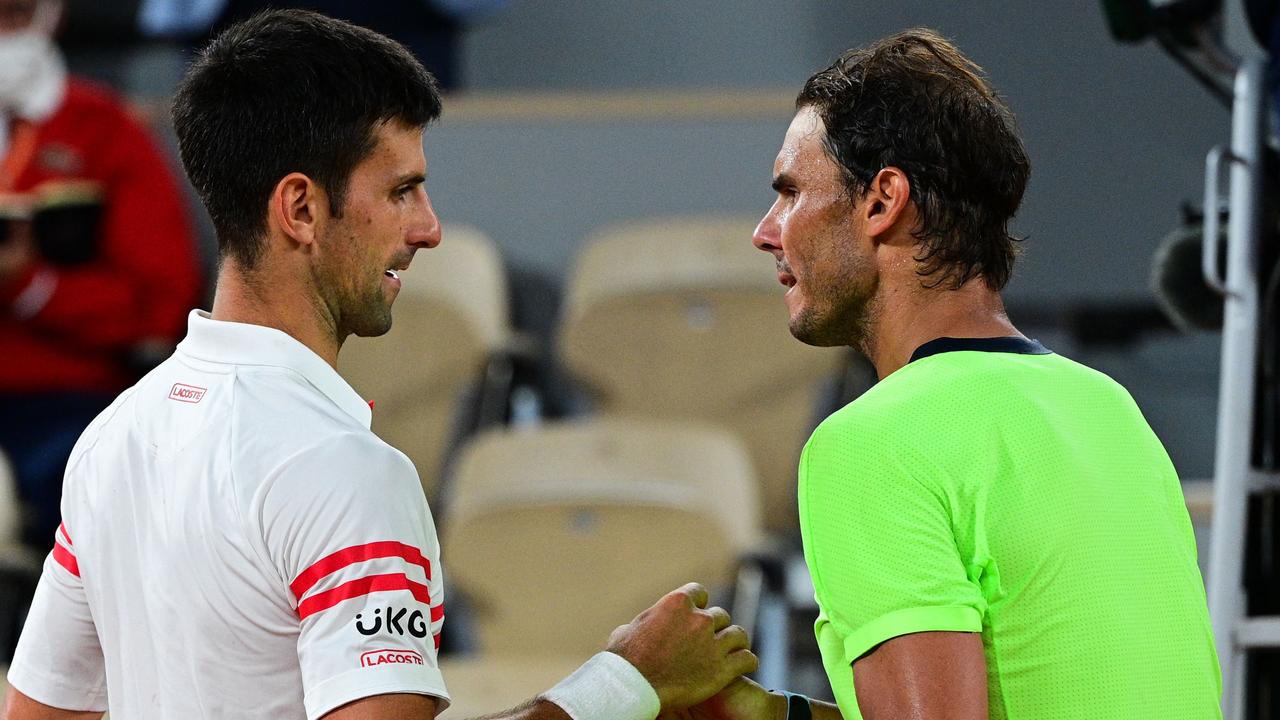 “This whole situation has taken a lot of spotlight away from us competitors,” he said.

“It feels like it’s taking away from us competitors, who just want to start. We’re eager to go out and compete.”

The 22-year-old said he wanted to put everything else behind him and let his tennis do the talking ahead of his first-round match with Italian Lorenzo Musetti.

“We’re here to play the Australian Open. We’re here on our own terms, ready to compete and hopefully have a very good couple of weeks,” he said.

“I don’t really think my thoughts are important... One person’s opinion isn’t going to change anything, it’s just going to cause more controversy,” she said.

“I think it’s an unfortunate situation like he’s such a great player and it’s kind of sad that some people might remember him in this way.”

The doctor widely credited with helping Novak Djokovic to reach the pinnacle of tennis has criticised Australia for twice cancelling the Serbian star’s visa and detaining him over Covid technicalities, saying he is “super healthy”.

“It’s absurd that somebody who has optimal health is a threat to the health of the public,” Dr Igor Cetojevic, a Bosnian-born Serb who lives in Cyprus, told AFP.

Australia stripped Djokovic of his visa on Friday and plans to detain him, just days ahead of his bid to win a record-breaking 21st Grand Slam title at the Australian Open in Melbourne.

Djokovic, an avowed Covid-19 vaccine sceptic, is the tournament’s top seed and had been practising on the Melbourne Park courts just hours before Immigration Minister Alex Hawke’s bombshell decision was announced.

Cetojevic, who spent a year on tour with Djokovic until 2011, when he won Wimbledon for the first time and became world number one, said the unvaccinated Serb was being treated unfairly.

“How can a super healthy guy be a threat for the Australian Open,” the 60-year-old doctor said, laughing out loud. Novak Djokovic has had his visa cancelled by the Australian government for a second time. Picture: Martin Keep/AFP

“It’s all politics, it starts with politics, not anything else,” said Cetojevic, who describes himself as a qualified medical doctor who uses energetical medicine, Chinese medicine and a holistic approach to healing.

In his 2013 book “Serve to Win”, Djokovic revealed how changing his diet on the advice of Cetojevic had helped to take him to the top.

“We’re like precision instruments,” Djokovic wrote in the book that reveals the gluten-free diet and fitness plan that transformed his career.

“If I am even the slightest bit off — if my body is reacting poorly to the foods I’ve eaten — I simply can’t play at the level it takes to beat these guys.”

Over the course of his stellar career, Djokovic has always sought ways to give himself an edge over his opponents.

Many of the remedies that he has turned to have been dismissed by his critics as quackery, but Cetojevic leapt to his defence.

Asked whether Djokovic’s performance would be harmed if he were to get a vaccine against the coronavirus, he said: “Definitely”. “Let’s call things by their right name,” he said in an interview at his home near the southern Cypriot city of Limassol.

“These so-called vaccines are, in fact, experimental products that have not been clinically proven.

“I’m seeing patients these days, ordinary people who followed the recommendation to be injected, who are now facing major health issues.

“The whole idea is to provoke the body’s immune system, but... we are all different. Some people have different reactions.

“If you have the best car for Formula One and you put the wrong petrol inside, what will happen?” the doctor said, adding that Djokovic understood this analogy from his own experience.

“He respects himself, he is aware and a smart person and he learns from his mistakes and he also from good choices. Luckily, meeting me 10 years ago, his life changed.”

The World Health Organization says the approved Covid vaccines have been rigorously assessed for safety, and clinical trials have shown that they provide a long-lasting immune response.

WHO chief Tedros Adhanom Ghebreyesus warned on Wednesday that the “overwhelming majority” of people admitted to hospitals were unvaccinated.

Djokovic flew into Melbourne on January 5 claiming a vaccine exemption because of a positive PCR test result on December 16.

Border agents rejected his exemption, revoked his visa and placed him in a notorious detention centre where he spent four nights.

The Australian government insists a recent infection does not qualify as a vaccine exemption for foreign nationals trying to enter the country.

Cetojevic said he remains in touch with Djokovic from “time to time”, but he declined to reveal if they had any contact in recent days.

“I’m always in touch with good friends... it depends on the time and needs,” he said.

“I’m happy that his spirits are high and that his feet are on the ground and he’s healthy.”