Novak Djokovic three-year ban from Australia confirmed: What it means

Tennis ace Novak Djokovic has been banned from entering Australia for three years — but there could be a loophole for the world No. 1.

Tennis ace Novak Djokovic has been banned from entering Australia for three years, although the government has the power to allow him to return earlier.

Minister for Home Affairs Karen Andrews confirmed the three year ban on an interview on the Today show this morning.

“The outcome of the process that went before the Federal Court and their determinations - the visa was cancelled by [Immigration] Minister Hawke,” she said.

“That cancellation was upheld by the Federal Court, so as a result of that, he will be banned from entry for three years into the country.”

But the minister noted the Australian government may choose to allow Djokovic in before the end of a three-year ban.

“But that’s all hypothetical at this point, any application will be reviewed on its merits,” she said.

Prime Minister Scott Morrison said: “It does go over a three-year period but there is the opportunity for them to return in the right circumstances, and that will be considered at the time”. 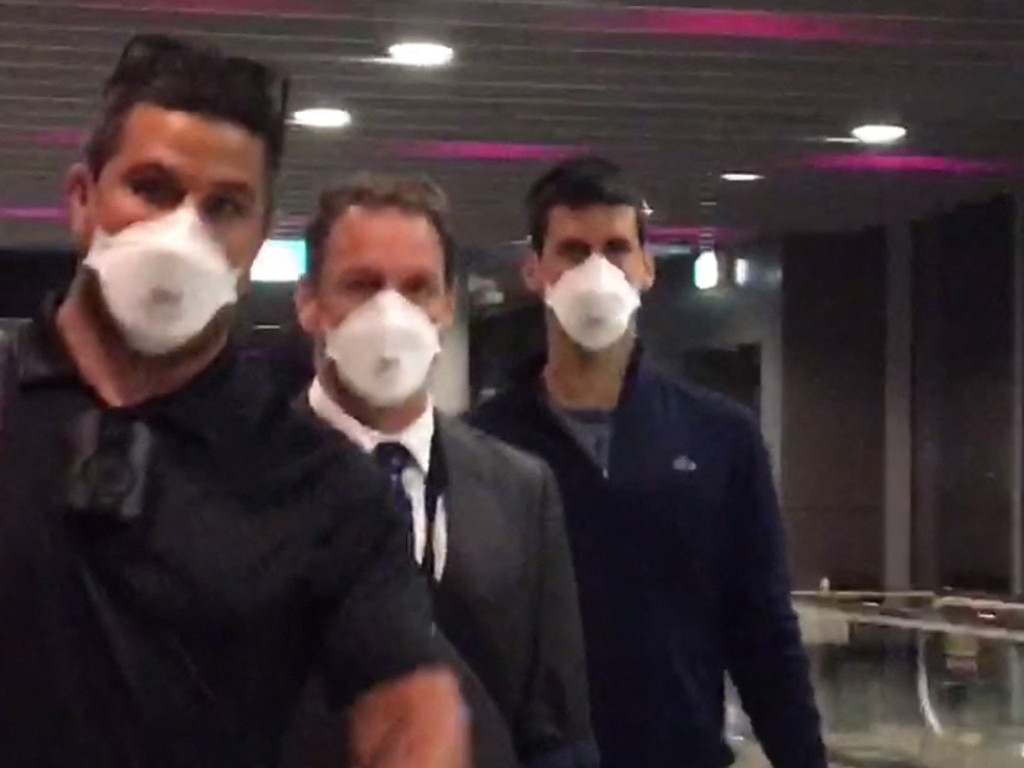 DJOKOVIC DEPORTED: HOW THE DRAMA UNFOLDED

Novak Djokovic’s bid to overturn his visa cancellation has failed, ending his hopes of defending his Australian Open title.

The Federal Court on Sunday upheld the government’s decision to deport the Serbian tennis star ahead of the Australian Open.

It followed a marathon visa battle heard by a full federal court bench, meaning there will be no avenue for further appeal within the court.

The decision to boot Djokovic is expected to create huge waves worldwide and stoke renewed anger by anti-vaccination groups which view him as a leader of freedom.
Already there has been strong reaction in the tennis community.

French player Alize Cornet wasted no time calling out her fellow professionals for their lack of support for the world No.1.

“I know too little to judge the situation. What I know is that Novak is always the first one to stand for the players. But none of us stood for him. Be strong,” she posted on Twitter.

“It’s official. The 9 time defending champion will be deported from Australia. This is a sad, sad day for tennis, Australia, the Australian Open and obviously for (Novak Djokovic). I honestly cannot believe it’s come to this.” Djokovic’s visa was cancelled by Immigration Minister Alex Hawke for a second time on Friday for reasons including concerns the player’s presence in the country could undermine Australia’s Covid-19 response.

Lawyers for Djokovic argued that the cancellation of his visa itself would more likely spur significant anti-vax sentiment, including large-scale protests.

Chief Justice Allsop declared the decision to boot Djokovic was unanimous across the full bench.

“This is not an appeal against the decision of the executive government,” he told the court.

“It is an application to the court as a separate arm of government being the Commonwealth judicial branch to review a decision by a member of executive, the minister, for the lawfulness or legality of the decision on the three grounds put forward.

“These grounds focus on whether decision was for different reasons irrational or legally unreasonable. It is no part or function of the court to decide upon the merit or wisdom of the decision.”

Djokovic was ordered to pay costs. The hearing has been adjourned to consider if any other orders are needed.

DJOKOVIC SPEAKS: ‘I AM EXTREMELY DISAPPOINTED’

In a statement released a short time after the decision, Djokovic said:

“I am extremely disappointed with the Court ruling to dismiss my application for judicial review of the Minister’s decision to cancel my visa, which means I cannot stay in Australia and participate in the Australian Open.

“I respect the Court’s ruling and I will co-operate with the relevant authorities in relation to my departure from the country.

“I am uncomfortable that the focus of the past weeks has been on me and I hope that we can all now focus on the game and tournament I love. I would like to wish the players, tournament officials, staff, volunteers and fans all the best for the tournament.

“Finally, I would like to thank my family, friends, team, supporters, fans and my fellow Serbians for your continued support. You have all been a great source of strength to me.” Djokovic leaving the Park Hotel in Melbourne before a court hearing yesterday upheld the government’s decision to deport the world No.1. Picture: Diego Fedele/Getty Images

“The Full Federal Court of Australia unanimously decided to dismiss Mr Novak Djokovic’s application for judicial review which sought to challenge the Minister for Immigration’s decision to cancel his visa.

“This cancellation decision was made on health, safety and good order grounds, on the basis that it was in the public interest to do so.

“I welcome the decision to keep our borders strong and keep Australians safe.

“As I said on Friday, Australians have made many sacrifices during this pandemic, and they rightly expect the result of those sacrifices to be protected.

“Over the pandemic, together we have achieved one of the lowest death rates, strongest economies and highest vaccination rates, in the world.

“Strong borders are fundamental to the Australian way of life as is the rule of law.

“Our Government has always understood this and has been prepared to take the decisions and actions necessary to protect the integrity of our borders.

“I thank the Court for their prompt attention to these issues and the patience of all involved as we have worked to resolve this issue.

“It’s now time to get on with the Australian Open and get back to enjoying tennis over the summer.” PLAYER REACTION: HOW THE TENNIS WORLD TOOK THE NEWS

Close friend and fellow ATP Tour professional Vasek Pospisil claimed Djokovic had no interest in coming to Australia had it not been for the exemption he thought was valid.

“Novak would never have gone to Australia if he had not been given an exemption to enter the country by the government (which he did receive; hence Judge Kelly’s initial ruling),” the Canadian posted on Twitter.

“He would have skipped the Australian Open and been home with his family and no one would be talking about this mess.

“There was a political agenda at play here with the elections coming up which couldn’t be more obvious.

“This is not his fault. He did not force his way into the country and did not “make his own rules”; he was ready to stay home.”