It doesn’t matter who you are, your moment – even if it might feel small – might help turn a dream into a reality, writes Ash Barty. She opens up on her true inspiration.

I am a firm believer in the power of great stories and the wisdom and inspiration and connection that can be drawn from them.

When it comes to my own life, the two champions who have inspired me the most were responsible for iconic stories destined to be remembered forever in Australia.

Evonne Goolagong Cawley’s triumph at Wimbledon in 1980, when becoming the first mother to win at the All England Club in the Open era, is one of the great achievements in tennis.

To have honoured her legacy by wearing a dress inspired by Evonne, my friend and mentor, when winning Wimbledon last July is a memory to treasure.

I would love to have watched Cathy Freeman setting the track alight in Sydney at the 2000 Olympics, but I am delighted to have learnt from her special story in the years since.

At the time I was too young to comprehend the enormity of her achievement, but to think even now that this moment united so many Australians sends shivers down my back.

Those women created a path for me to follow, a spark that fired my dreams.

Storytelling is a massive part of Indigenous culture and Evonne and Cathy own tales both riveting and incredible. 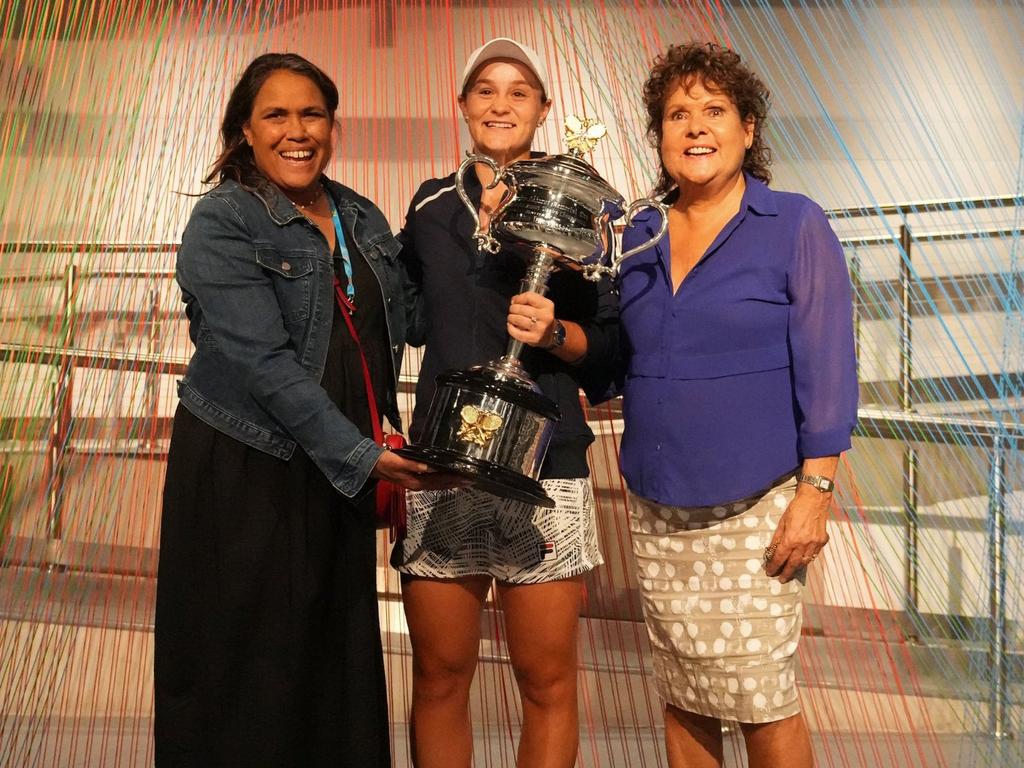 No-one tells a story better than Evonne. There must be tens of thousands of Australians, from children still in school to parents who now have their own kids, who have learned from her.

The prop which gives her story a punch as perfect as her volley is a wooden paddle which served as her first racquet.

Evonne went on to win Wimbledon and met with famous people all around the world, but she retains great pride in this wooden paddle which provides a reminder of who she is.

That humble bat helped a joyful young girl from a small town called Barellan become a seven-time grand slam champion and an inspiration on and off the court.

When she tells kids the story of her journey, sporting a big smile and swinging that paddle, you see it in their eyes. It sparks the “What if?” moment for them.

Magic can happen when a young boy or girl starts asking themselves that question. I was once one of them.

It is an incredible thing to see and I’m forever fortunate that meeting Evonne as a teenager helped me on the pathway to realising my own dreams.

An amazing moment in my life occurred after this year’s Australian Open when, in the corridors of Melbourne Park, I saw Evonne together with Cathy. To share that success with my idols was wonderful and, for me, it felt like a full circle moment. They were there for my triumph, just as they had helped me through some testing times.

When I took a break from tennis in 2014, Evonne wrote to me, advising me to ‘Go and wet a line’ and enjoy myself.

She told me those who loved me always would, no matter what I did.

It was one of the first matches where Cathy had watched me live and I can remember being awestruck that she was there to support me, as much as the loss stung.

That night I was out with Ben Crowe, my mindset coach, and he called Cathy and put me on the phone to her.

I was trying to thank her and tell her what she meant to me when I began bawling my eyes out, telling her: “I just want to be like you.”

She told me: “Oh Bub. Just keep being you. It will happen. Just keep believing.” I love that even now she still calls me Bub.

I was too young to see her run. But 22 years on from her incredible moment in Sydney, I remained inspired by her achievement and her story. 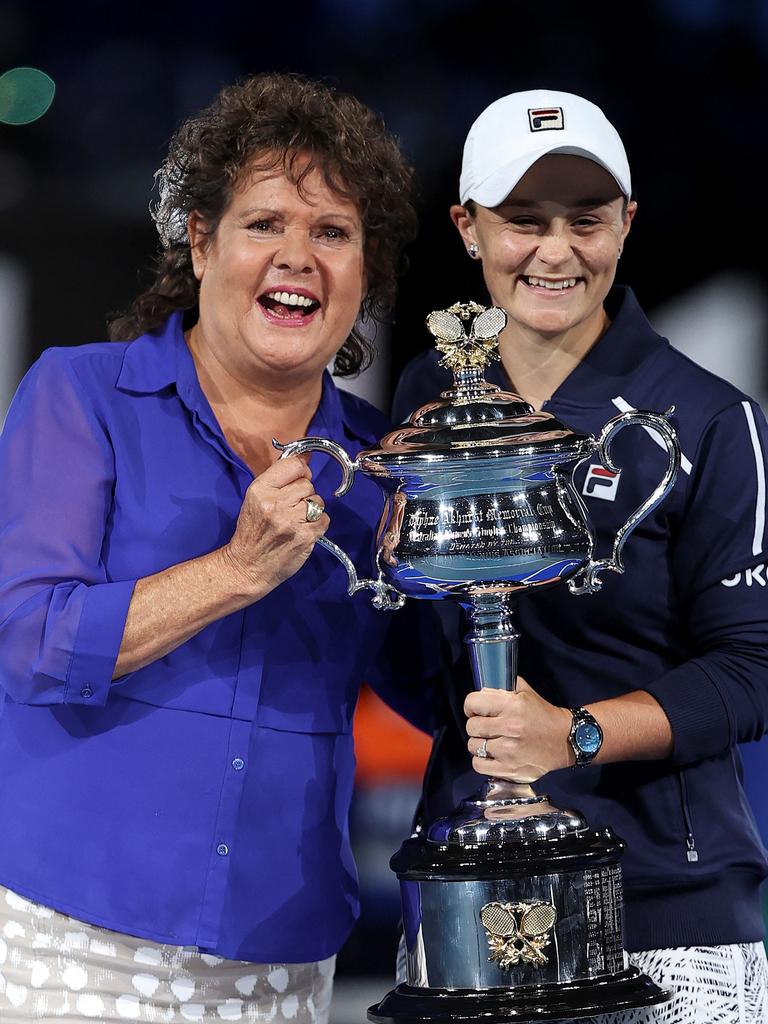 It is empowering to have these two amazing Aboriginal women leading the way for me and others.

But even more important to me is the work they have done away from tennis and the track.

When I am connecting with Evonne and Cathy, I still feel like I am a “bub” to them.

The gap in wisdom is a difference between us. I might have had my moment on the court, but I’m still very young and learning about myself and growing as a person.

In some ways that is scary. But it is also really exciting. Tennis took me around the world, but my journey is only just beginning, just as sport was only one aspect of their stories.

To see the amazing deeds Evonne and Cathy have done with their foundations, to have met some of the people who have benefited from their work, and to understand that so many kids have been given the opportunity to flourish by them is something I am inspired by.

With my team, we are considering ways in which I can play a role helping young kids across Australia to be the best they can be in sport or when studying, in a band or in art class.

I’ve already had the great fortune to visit remote parts of Australia, from the Tiwi Islands to the Mutitjulu community near Uluru, and spread my passion for tennis and sport and the role it can play in helping young people find their own path to follow in life.

Just as myself and so many learned to dream when inspired by Evonne and Cathy, hopefully my story can provide a pathway to success for others. I am really excited by what lies ahead.

Leadership and storytelling is not just about me or Evonne and Cathy. In my gut, I have always believed that every single person on this planet has the ability to inspire. We are all capable of a moment.

Sometimes those moments are seen by millions. Several recent examples by Indigenous champions were moments which got me off the couch, screaming in excitement.

The sight of thousands of people running onto the SCG after AFL player Lance Franklin kicked his 1000th goal earlier this year had my heart pumping.

Patty Mills proved himself the heartbeat of the Boomers at the Olympics. Johnathan Thurston was always so inspirational for his state and also his nation.

Scott Boland’s debut at the MCG last December was one for the believers. What a story.

Kyah Simon, the soccer star who was the first ambassador for Indigenous Sports Month, has been an inspiration for so many young girls when representing the Matildas.

One of my favourite parts about attending the Tokyo Olympics was having the chance to meet and spend time with Sam Kerr. I love the way she approaches her sport and her life. She is a real mover and shaker.

They are wonderful ambassadors for Indigenous people but also the entire country and I’m hopeful my story, like theirs, has provided a flicker of inspiration for kids across Australia.

But you do not have to be a Wimbledon champion or Olympic gold medallist to lead.

It does not matter what your career is, be it as a shop owner or assistant, or a lawyer or teacher, or a mum or a dad, when it comes to setting an example.

Your moment, even if it might feel small to you, might help turn a dream into a reality.

Evonne taught me a great lesson with her authenticity, humility and good cheer.

What little thing can you do today to help someone or give them a good memory or feeling of happiness?

We can all do something and it might encourage someone to take the first step onto the pathway to success and to create their own story to inspire the next generation of Australians.