Where is Peng Shuai?: The latest twist in hunt for missing tennis star

Tennis star Peng Shuai has not been seen or heard from since she accused a Chinese governor of sexual abuse two weeks ago. Here’s what we know about the disturbing situation.

An email purporting to have been written by missing tennis star Peng Shuai has been released prompting further concern for her well being almost two weeks after she was last seen.

Pressure has been growing on Chinese authorities to clarify the status of the 35-year-old Peng, a former Wimbledon and French Open doubles champion.

Peng alleged on the Twitter-like Weibo earlier this month that former vice-premier Zhang Gaoli had “forced” her into sex during a long-term on-off relationship.

It was the first time the #MeToo movement has struck at the top echelons of China’s ruling Communist Party, but the post was swiftly deleted and nothing has been heard from Peng since. 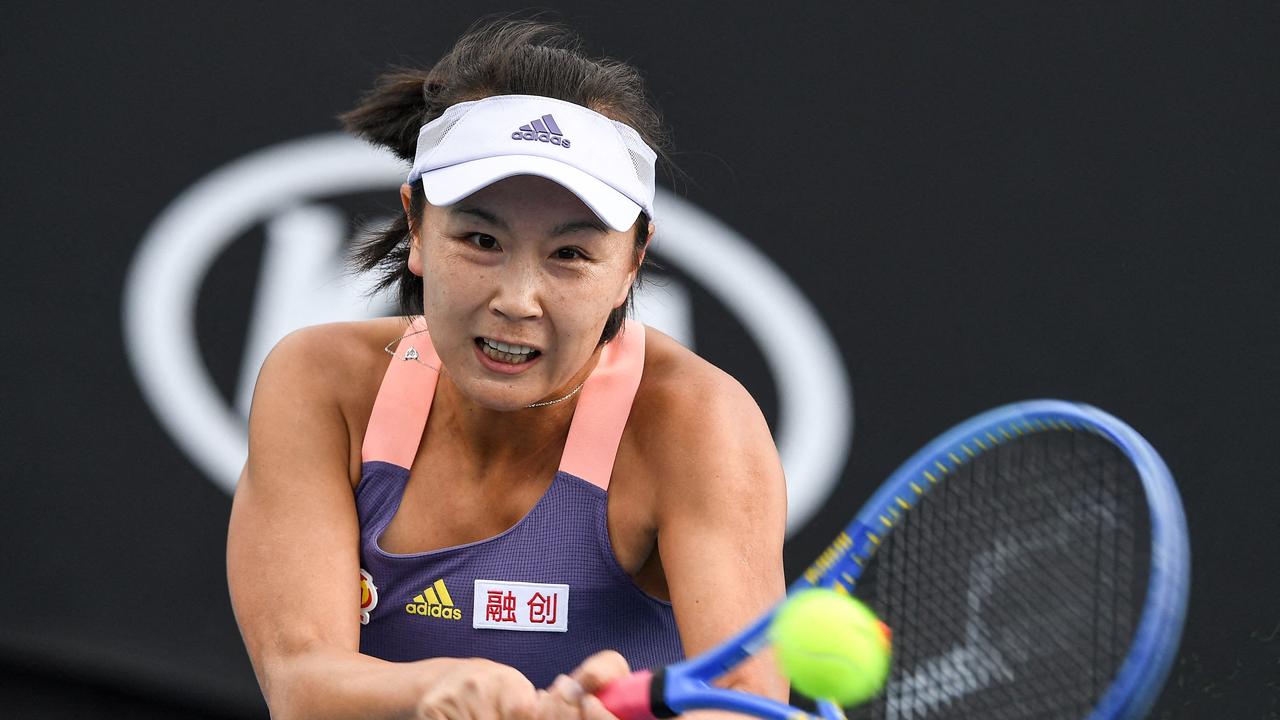 #WhereIsPengShuai is trending across global social platforms. The Chinese tennis star has been missing for nearly two weeks.

Today’s email, allegedly written by Peng, backtracked on those claims.

“Hello everyone this is Peng Shuai,” the statement read.

“Regarding the recent news released on the official website of the WTA, the content has not been confirmed or verified by myself and it was released without my consent.

“The news in that release, including the allegation of sexual assault, is not true. I’m not missing, nor am I unsafe. I’ve just been resting at home and everything is fine. That you again for caring about me.

“If the WTA publishes any more news about me, please verify it with me, and release it with my consent. As a professional tennis player, I thank you all for your companionship and consideration. I hope to promote Chinese tennis with you all if I have the chance in the future.”

Reacting to the email, WTA boss Steve Simon said it “only raises my concerns as to her safety and whereabouts.”

“I have a hard time believing that Peng Shuai actually wrote the email we received,” he said.

“The WTA and the rest of the world need independent and verifiable proof that she is safe,” Simon said.

“I have repeatedly tried to reach her via numerous forms of communications, to no avail.

“Peng Shuai must be allowed to speak freely, without coercion or intimidation from any source. Her allegation of sexual assault must be respect, investigated with full transparency and without censorship.”

Four-time Grand Slam champion Naomi Osaka is among the big names calling for more information about Peng’s whereabouts to be released.

Osaka said that she was in “shock” about the situation.

Her concern follows that of men’s number one Novak Djokovic and numerous other players in recent days saying they were deeply worried about her.

The 24-year-old Osaka wrote a short statement on Twitter, where she has 1.1 million followers, accompanied by #WhereIsPengShuai -- a hashtag which has been widely used on social media.

“Censorship is never ok at any cost, I hope Peng Shuai and her family are safe and ok,” the Japanese former world number one wrote.

“I’m in shock of the current situation and I’m sending love and light her way.”

Djokovic, speaking after his ATP Tour Finals match against Casper Ruud on Monday, described the situation as “terrible”.

“More so that it’s someone that I’ve seen on the tour in previous years quite a few times.

“There’s not much more to say than to hope that she’s ok and it’s just terrible … I can imagine how her family feels, you know, that she’s missing.”

I hope @WTA continues to show what we stand for as players. We are extremely lucky to be able to do what we do but I hope more people, not just tennis players, shed some light on this deeply concerning situation ðŸ™ https://t.co/B9TEoeoJ2Y Naomi Osaka has called for more information on Peng’s whereabouts.

Chris Evert, the 18-time Grand Slam winner, on Sunday became the highest profile current or former female player to join social media expressions of concern that have given rise to the Twitter hashtag #WhereIsPengShuai.

“I’ve known Peng since she was 14; we should all be concerned; this is serious; where is she? Is she safe? Any information would be appreciated,” Evert tweeted.

The Women’s Tennis Association called Sunday for Peng’s claims to be “investigated fully.”

China has remained quiet about Peng and its national tennis association did not respond to AFP requests for comment.

Asked to respond to the mounting questions, foreign ministry spokesman Zhao Lijian said: “I have not heard of the issue you raised.”

He added that “this is not a diplomatic question” and made no further comment on the fate of the former world number one doubles player.

Details of Peng’s reported accusations, made earlier this month that former vice-premier Zhang Gaoli had sexually assaulted her, remain scrubbed from China’s internet. Searches for their names on key portals come back empty.

Searches for her account on Weibo also returned no results, although the account was still accessible via a direct web link.

China’s national tennis association did not respond to AFP requests for comment.