Conor McGregor’s management team says Australia is about to experience the ‘Della era’, convinced 25-year-old Jack Della Maddalena will go all the way to a UFC welterweight title.

Originally from Western Australia himself, Simpson now resides in LA where he works among a Paradigm stable including the likes of Irish megastar McGregor and UFC middleweight king Israel Adesanya.

Only recently, the agency also signed Della Maddalena, who makes just his second walk to the Octagon against Russian Ramazan Emeev at UFC 275 in Singapore this Sunday. 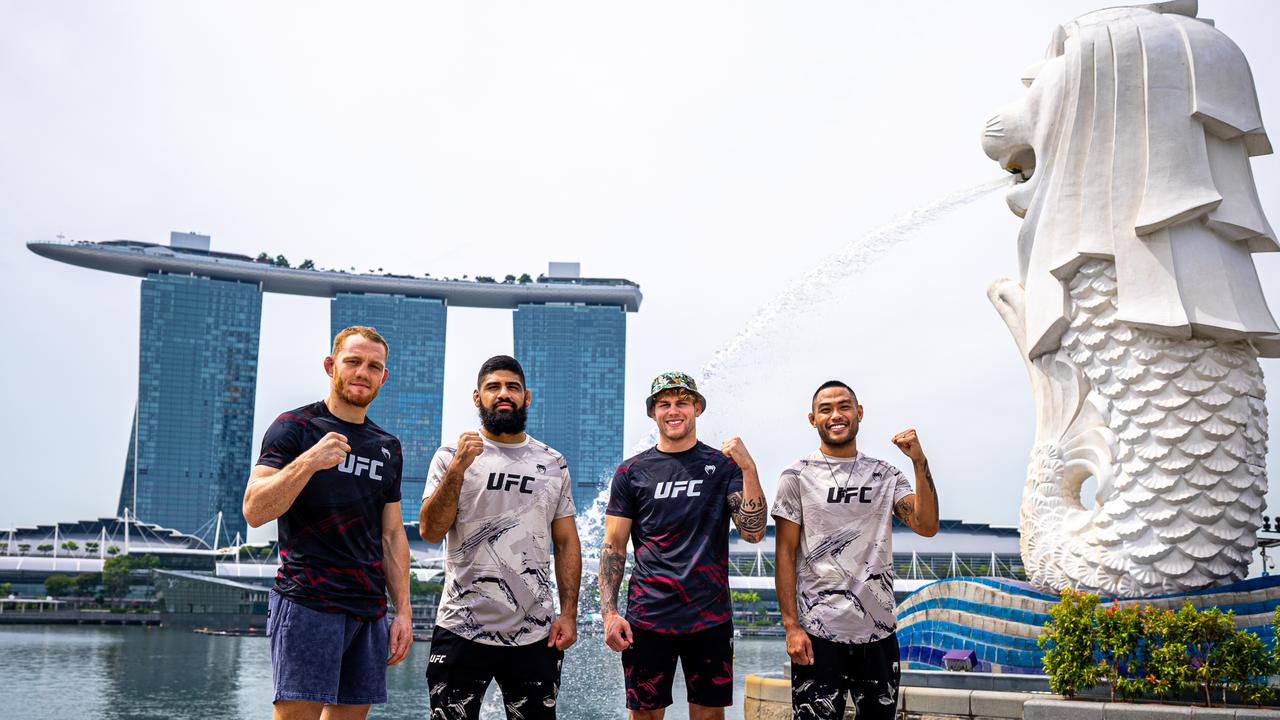 Quizzed on the young striker, Simpson predicted his client will achieve the same championship success as countrymen Robert Whittaker and Alexander Volkanovski.

“Rob Whittaker really put Australian MMA on the map,” the agent said. “And now you’ve got Alexander Volkanovski doing the same, too.

“And Jack, he’s the next wave.

“I really believe we are going to have the ‘Della’ era.

“I see him absolutely having the same level of success as those other two guys.

“And I don’t say it lightly, either.

“But I want to work with athletes that have a high ceiling, and Jack has that. 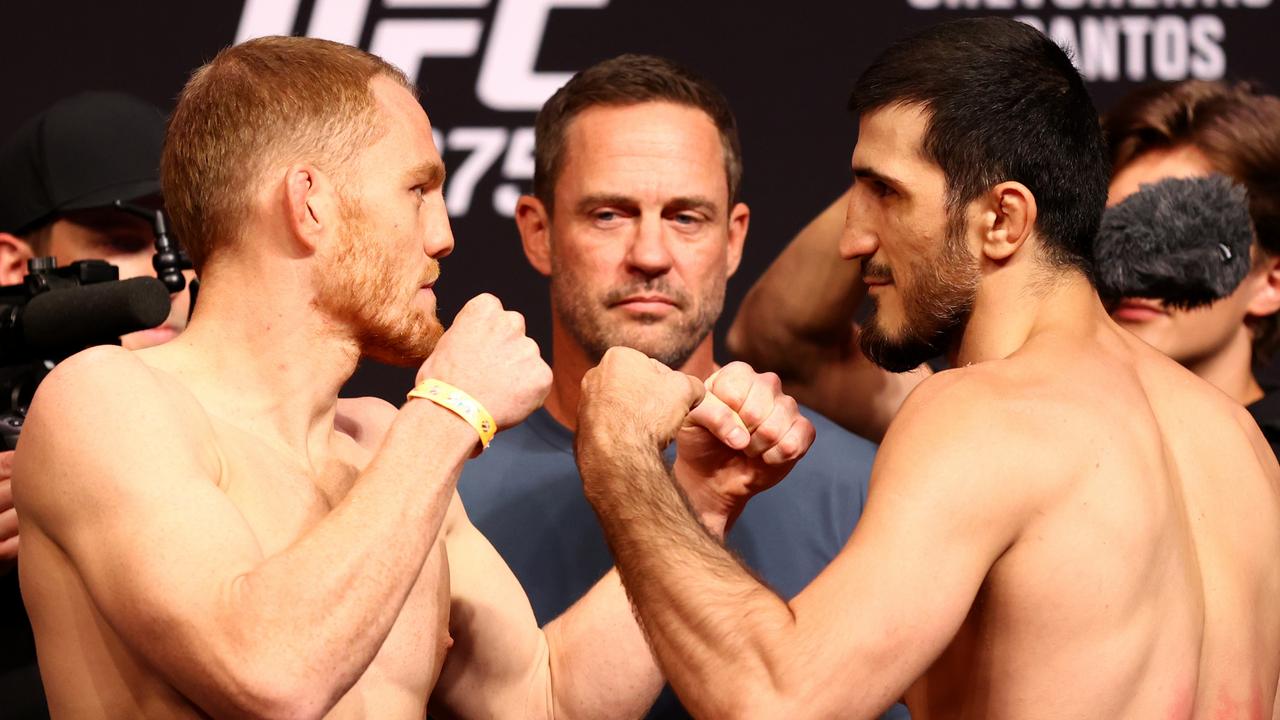 “Jack’s style is so easy to sell,” he continued.

“He’s a humble guy, not a big talker.

“But there is a brand to him.

“And his fighting speaks for itself.

“I’ve worked with a lot of guys and Jack has everything you need.

“He’s that next generation guy.”

Della will be the first fight on the Pay-Per-View section of the Singapore card, which also now includes Melbournian Jake Matthews throwing down against Andre Fialho. The Aussie was promoted following the cancellation of a bout between Rogerio Bontorin and Manel Kape, after the former was hospitalised following weight cutting issues.

Sydneysiders Jacob Malkoun and Josh Culibao will fight on the ESPN preliminaries.

Whittaker in support of ‘s...head’

Australian UFC star Robert Whittaker is in Singapore this week to support the “s…head” who, he says, gets under his skin more than any rival.

Despite already being in training for his hyped UFC Paris showdown with Italian Marvin Vettori in September, Whittaker is attending UFC 275 to support long-time training partner Jacob Malkoun.

Incredibly, the pair first met years ago in error, with Whittaker recalling how a “chubby little kid” walked into his training base thinking it was a boxing gym.

Despite having little knowledge of MMA, a young Malkoun hung around and has since risen up to become the main training partner for Australia’s first UFC champion. “So we really are brothers in arms,” Whittaker says of the fighter seeking his third straight Octagon win against American Brendan Allen.

“Thanks to his own evolvement and growth, it’s definitely helped me become the fighter I am today.”

Yet when asked to give us something about Malkoun nobody else knows, Whittaker laughed: “He’s a s…head”.

“Jacob knows how to get under my skin and loves it,” Whittaker concedes.

“Usually, I’m a guy with pretty thick skin. Can brush most things off. “But Jacob, God love him, he just has the way of saying the right words and the right times to really piss me.”

While Malkoun may not have the profile of his more famous training partner, and credits his rise simply to long hours in the gym, Whittaker sees more.

“Jacob may not have a physique blessed by the Gods,” he says of the fighter who also works as wrestling coach for reigning NRL premiers, Penrith.

“But winning isn’t as simple as biting down on your mouthguard and going to work. If that were the case we’d have a lot more people in the UFC.

“And MMA in Australia, it really is a washing machine for athletes.

“Every second guy wants to be a fighter, so they jump into the sessions, into training and realise ‘hey, I don’t like being punched in the face.

“So then they bounce.

“That’s how the game is.

“So you don’t get into the UFC, or put on the type of performances Jacob has without athleticism, without skill.

“And Jacob works harder than everyone else in our gym.

“He’s first there, last out, every time.”

Malkoun not hugging it out

Jacob Malkoun has laughed off claims he fights boring and tries hugging his way to victory, describing the sledges from his American rival Brendan Allen as “bulls…”.

Seeking his third straight win at UFC 275, Malkoun said he had no interest in Allen’s pre-fight digs but warned the Florida fighter against underestimating him. None of which Malkoun even knew about until we asked him to respond this week.

“I haven’t heard that,” the Sydneysider said. “But if he thinks I’m boring, OK, that works for me.

“Because it doesn’t matter what he thinks.

“I’ve just got to get in there and do what I do, otherwise all the bulls… around it stuffs with your head.

“But right now, I feel like I’m going to the next level with every fight. I know how hard Sunday’s fight will be, so my only focus is winning.”

The coach with the Jackie Chan body

UFC coach Igor Breakenback is a man of many talents.

As revealed by News Corp earlier this week, the head coach of UFC featherweight Josh Culibao has worked all over the world as a stuntman, actor and fighter.

But one of his more unique roles was playing the body double for Hollywood’s Jackie Chan in a print commercial for the 2008 Beijing Olympics. “And I remember at the time everyone raving about how good Jackie looked in the shot – that he was like a guy in his 30s,” Breakenback laughs.

“Because I was in my thirties. It’s my body and Jackie’s head.”

Covid left Culibao ‘all over the place’

Sydney featherweight Josh Culibao has revealed how training through a bout of Covid in January left him “all over the place” for two months afterwards.

Set to face South Korea’s Choi Seung Woo at UFC 275, Culibao had only just signed on to fight in March when he tested positive to coronavirus.

“And idiot me, I tried to pushing through it,” he revealed this week in Singapore. “Initially, I didn’t feel too bad while isolating so kept training, kept pushing my body to the limit. 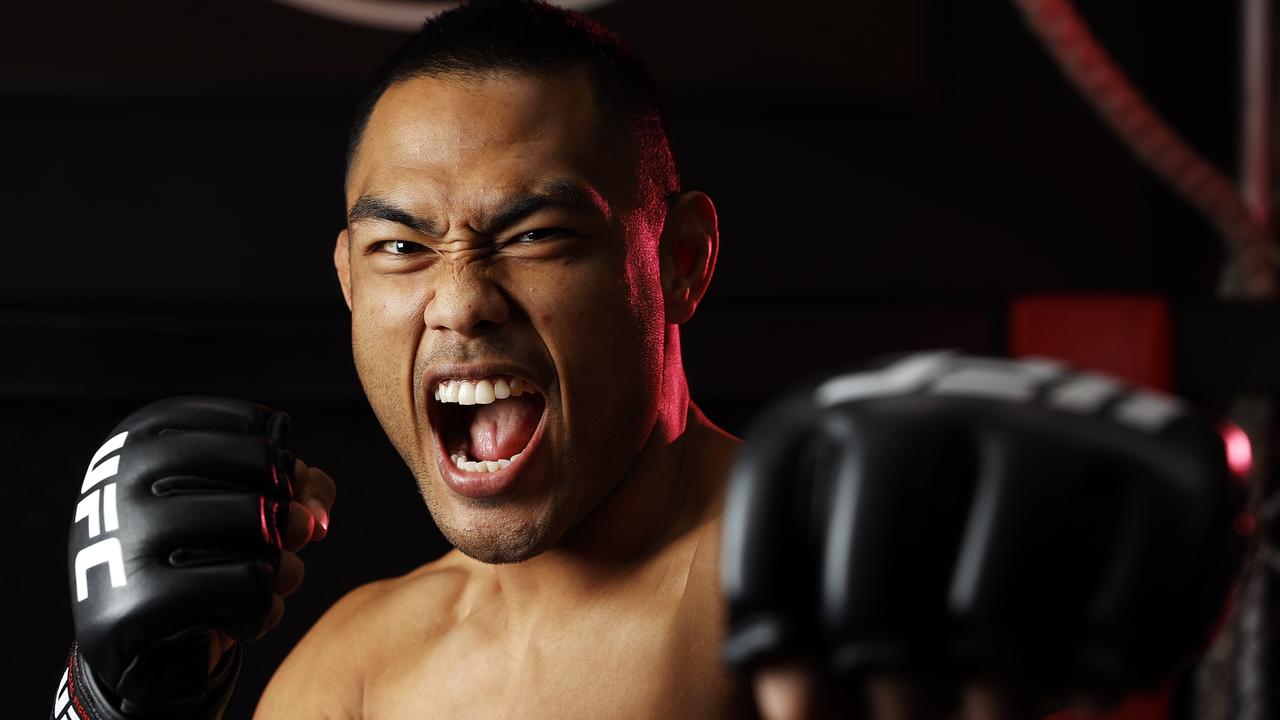 “Which I know sounds silly now but I really was just so determined to make sure I was right for the fight.

“But that’s when it hit me big.

“I was all over the place — vomiting, diarrhoea, headaches, body aches, even lost my taste and smell.

“Then when I eventually returned to the gym, it felt like someone was sitting on my chest. It was scary.

“I’d seen a lot of soccer players who had tried to return too soon from Covid and were dropping like flies.”

Despite the scare, Culibao is now back to full health and insists he suffers no lingering effects from the Covid saga. 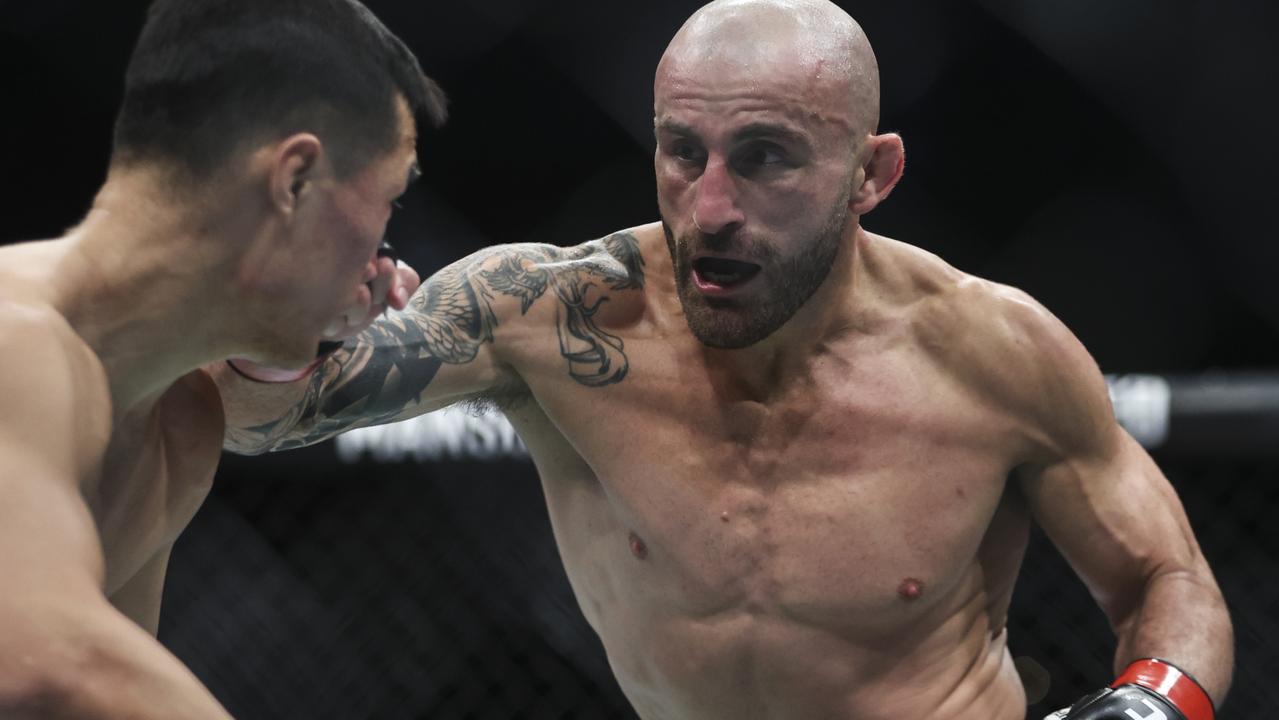 Volkanovski: I can reign over two UFC divisions

Alexander Volkanovski is hellbent on an outlandish plan to reign over two divisions after Australia’s No. 1 fighter unveiled his blueprint for UFC greatness. 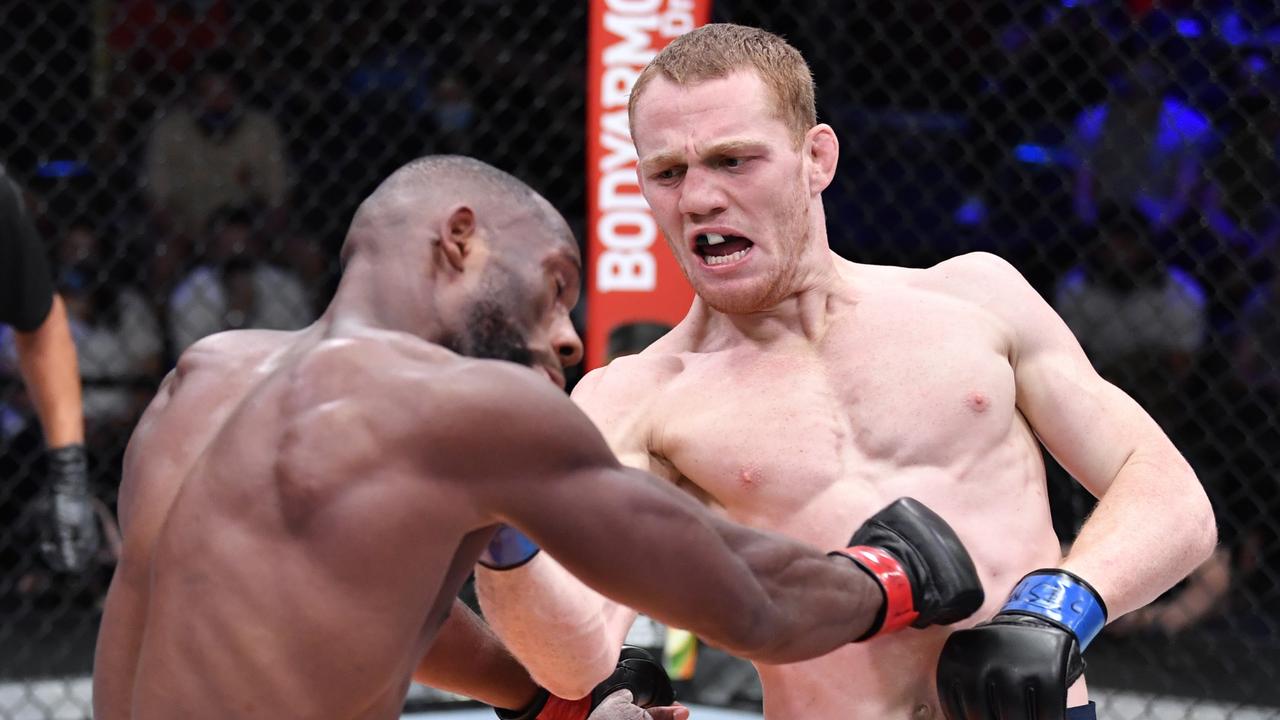